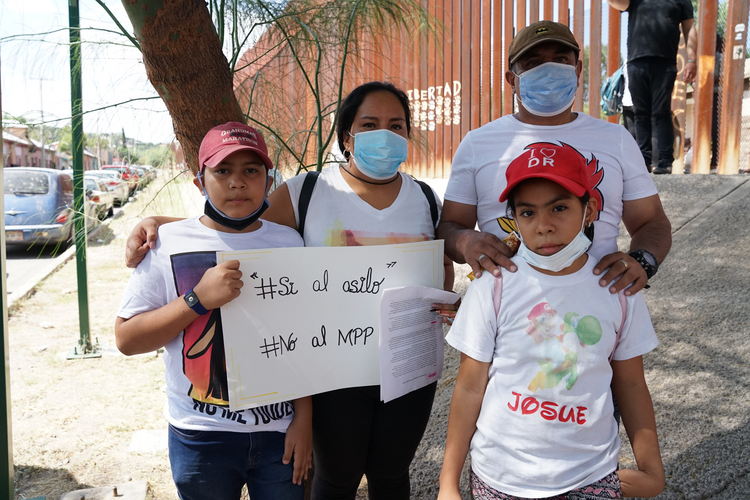 Xiomara Martinez, pictured here with her two children, both U.S. citizens, and her brother, Sergio, traveled to Nogales, Sonora. They have been waiting to petition for asylum for six months. (J.D. Long-García)

Amid the pandemic, racial tensions and the upcoming presidential election, some may have forgotten about the thousands of asylum seekers along the U.S.-Mexico border. Many asylum seekers have been waiting there since January to take the next step in their pursuit of political refuge, but there is no end in sight.

The Migration Protection Protocols, known as the “Remain in Mexico” policy, empowered immigration officials to return thousands of asylum seekers to Mexico while their cases were being decided by the U.S. immigration court system. According to the Department of Homeland Security, the policy is intended to address the escalating number of asylum claims.

In July, D.H.S. suspended hearings for those waiting for asylum in Mexico because of the pandemic. The agency established health criteria for Arizona, California and Texas to meet before hearings would resume.

Now “asylum on the border is pretty much impossible,” Luis Guerra, a legal advocate with the Catholic Legal Immigration Network, told America. “Covid is being used as an excuse to close the border.”

“Asylum on the border is pretty much impossible,” a legal advocate with the Catholic Legal Immigration Network, said. “Covid is being used as an excuse to close the border.”

“Our asylum process is not meant to help people get asylum,” he said, noting it is difficult for asylum seekers to find legal help in the system. “There’s no rhyme or reason as to why certain people get through and why others don’t.”

On Sept. 21, a group of about 60 asylum seekers and immigration advocates gathered on the Mexican side of the border at the Parque de las Golondrinas, just south of the main port of entry in Nogales, Sonora. They practiced chants while organizers urged social distancing and dispensed hand sanitizer.

The group marched in front of Nogales shops near the border, holding signs that read “Todos tienen el derecho de solicitar asilo” (“Everyone has the right to ask for asylum”) and “La migración es un derecho humano” (“Migration is a human right”). The Kino Border Initiative, which helped organize the protest, live streamed the march on Facebook.

The asylum seekers who gathered at the park had reached Nogales from many Latin American countries, like Cuba, Guatemala, Honduras and Nicaragua. The group stopped briefly to say a Hail Mary at the port of entry and then walked a few hundred yards west to a spot on the border wall where they met a small group of interfaith leaders and advocates who had gathered on the U.S. side of the wall in solidarity.

“My only option was to leave Honduras,” said Ms. Sánchez, breaking into tears. “Please open your hearts. We only want to in some small way be as blessed as you are.”

Yolani Sánchez, one of the speakers at the rally, said that gangs had attempted to kidnap her oldest daughter a few years ago in Honduras. After her husband reported the incident to the authorities, gang members came to their home to beat him. Her husband and eldest daughter fled to the United States.

When gang members came looking for Ms. Sanchez’s husband, she refused to say anything. They returned time and again, but she would not cooperate with them. So the gang members sexually assaulted her youngest daughter, who was 14. Her brother, enraged at what had been done to his niece, confronted the gang members. They killed him.

“My only option was to leave the country,” said Ms. Sánchez, breaking into tears as she addressed those watching on Facebook. “Please open your hearts. We only want to in some small way be as blessed as you are.”

Mardoqueo López left Guatemala with his 9-year-old son in January. They have been waiting in Nogales to ask for asylum since February. Members of the infamous Mara Salvatrucha gang, MS-13, threatened him. “They beat me and left me for dead,” he told America. “Even after we fled, they would drive by my home and shoot bullets into the walls.”

His wife and two daughters abandoned the house and are living with a family friend.

“We just want to be treated humanely by the United States,” he said. “We come looking for protection for our families. I’m a family man. I never wanted to be separated from my family like this.”

“We just want to be treated humanely by the United States. We come looking for protection for our families.”

Nearby, Xiomara Martínez gave her two children bottles of water. She, her children and her brother, Sergio, made the trip to Nogales from Honduras. They have been in Mexico for six months.

“We’ve been given a [application] number to ask for asylum, but they keep changing the [hearing] date,” she told America. She is a single mother, and both of her children are U.S. citizens. Her son has a medical condition she believes needs to be treated in the United States.

“They couldn’t treat him [in Honduras],” she said. “He was born in the United States. That is his country. We do not have insurance. He should be cared for there.”

Her brother used to drive a small public transit vehicle for a living. Gang members from MS-13 and 18th Street extorted so much money from him that he could not keep up with his bills. After Mr. Martinez reported the gangs to the local authorities, the gangs threatened his life.

“I was told I’d have to suffer the consequence,” Mr. Martinez said. “I sold my little bus and we left. We are not delinquents. We are not thieves. We are not murderers [as] President Trump and so many others think.”

During their indefinite wait on the border, asylum seekers have to deal with a number of other threats, including kidnapping, torture, rape and sexual assault, Mr. Guerra said. “Organized crime focuses on the migrant population because they often have connections in the U.S.,” he said. “They target asylum seekers. They can kidnap them and get extortion money.”

Criminals will abduct migrants, take their cell phones and call every one of their contacts to ask for ransom, Mr. Guerra said. Many of those waiting in Mexico because of the Migrant Protection Protocols have been trapped in the same situation.

And crime is not the only threat to people forced to keep their lives on hold at the border. A lack of testing makes precise Covid-19 infection rates in Mexico’s border towns difficult to estimate. With space running out at official shelters, many migrant families live in makeshift tents and habitations that mean physical distancing is a challenge. Humanitarian outreach agencies have changed how they deliver services with community spread of the coronavirus in mind.

Some who fled persecution in their home countries are found by their persecutors, he said. “There are few shelters, so they are easy to find,” Mr. Guerra explained.

Bishop Edward J. Weisenburger of Tucson, who was unable to attend the gathering personally, sent a message to be read during the rally.

“In disregard of our legal and moral tradition as a nation, our modern-day representations of Mary, Joseph and Jesus are stuck in situations of persecution and danger instead of being allowed to join the families and communities waiting to receive them,” he said in the statement. “As a member of American society, I recognize my own complicity in this social sin and invite us to repentance for our nation’s choice to inflict suffering on families who are simply seeking safety.”

1
Pope Francis: It is a sin to use Christianity to judge and exclude
Junno Arocho Esteves - Catholic News Service
2
Review: Netflix’s ‘Midnight Mass’ is Catholic horror at its best
Nick Ripatrazone
3
Matt Malone, S.J., president and editor in chief of America Media, to step down in 2022
Michael J. O’Loughlin
4
Cardinal Raymond Burke says his recovery after Covid-19 has been slow
Todd Richmond – Associated Press
5
Explainer: Why did the Catholic Church cooperate with the Canadian government’s abuse of Indigenous children?
Dean Dettloff