Joe Biden will be the second Catholic president. Here’s what you need to know about his faith. 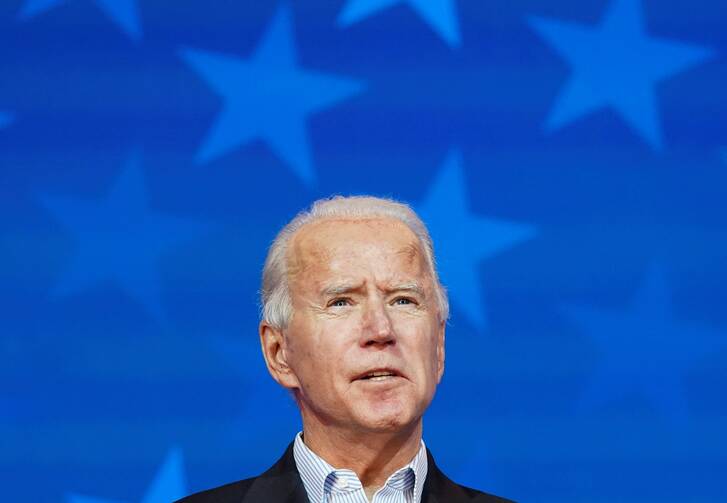 The morning of Election Day, Joseph R. Biden Jr. prayed during Mass at the Catholic parish near his home in Delaware. Late that night, when it became clear that no winner would be determined, Mr. Biden spoke to supporters. He urged patience, told them that he believed he would be elected president and asked them to “keep the faith.”

The president-elect kept the faith, and major news outlets have projected Mr. Biden has captured enough electoral votes to win the presidency. He will be just the second Catholic to hold the office.

Mr. Biden’s Catholic faith was highlighted by his campaign and his supporters throughout the campaign. Television ads featured images from Mr. Biden’s two meetings with Pope Francis, he spoke to the media about how his faith anchored him during difficult moments, and pool reports routinely captured him leaving Mass.

In a 2015 interview with America’s editor in chief, Matt Malone, S.J., Mr. Biden called his faith a “gift,” saying his parents inculcated in him Catholic values.

In a 2015 interview with America’s editor in chief, Matt Malone, S.J., Joe Biden called his faith a “gift,” saying his parents inculcated in him Catholic values.

“Jesus Christ is the human embodiment of what God wanted us to do,” Mr. Biden said. “Everything Jesus did was sort of consistent with what generically we were supposed to do: treat people with dignity.”

In that interview, Mr. Biden spoke about his meeting with Pope Francis in 2013. “He’s the embodiment of Catholic social doctrine that I was raised with,” the former vice president said. “The idea that everyone’s entitled to dignity, that the poor should be given special preference, that you have an obligation to reach out and be inclusive.”

Mr. Biden traces his Catholic faith back to Catholic schools in Delaware and Pennsylvania. He wrote in his memoir, Promises to Keep, that during a visit to a Catholic grade school, a child asked Mr. Biden if he wanted to be president, and he replied that he was happy being a senator. But a Catholic sister corrected Mr. Biden. “You know that’s not true, Joey Biden,” she said, before showing him an essay he had written as a child saying he wanted to be president. He wears a rosary around his wrist, a gift his son, Hunter, gave to Mr. Biden’s late son, Beau.

Mr. Biden has said his faith has helped him cope with personal tragedy, including the death of his wife and daughter in a 1972 car crash and then again in 2015, when his son Beau died from cancer. Mr. Biden had a health scare himself in 1988, shortly after he dropped out of the presidential race. He was admitted to Saint Francis Hospital in Wilmington. With his family gathered around, a priest visited to administer the sacrament of anointing. Mr. Biden healed following surgery, and for the next two decades, he returned to work in the Senate.

“He’s the embodiment of Catholic social doctrine that I was raised with,” the former vice president said. “The idea that everyone’s entitled to dignity.”

Later, in 2008, Mr. Biden’s political fortunes changed when then-Senator Barack Obama chose him as his running mate. According to Mr. Obama’s chief strategist, David Axelrod, Mr. Obama chose Mr. Biden, in part, because “he came from a working-class Catholic family in a pivotal part of the country and still spoke of that experience.”

According to Mr. Biden’s biographer, Jules Witcover, “Nothing was more sacred to [Mr. Biden] than his church and nothing more cherished than his blood family.”

“Biden actually sees his Catholic faith as a key for bringing the country back together and overcoming the divisions that divide us,” Stephen Schneck, the executive director of the Franciscan Action Network, told the National Catholic Reporter earlier this year. “He thinks there’s something in Catholicism itself that provides a ground where both sides can find commonplace.”

[The Editors: Joe Biden has a mandate: to heal our wounded and divided nation]

Senator Chris Coons, a Democrat from Delaware, said at this summer’s Democratic National Convention: “Joe’s faith is really about our future, about a world with less suffering and more justice, where we’re better stewards of creation, where we have a more just immigration policy and where we call out and confront the original sins of this nation, the sins of slavery and racism. Joe knows these are central issues in this election. And for him, they're rooted in faith.”

A staffer on Mr. Biden’s campaign said Mr. Biden’s faith was on display to voters throughout the campaign, which came naturally because of the role it plays in his life.

“It’s not like we are just talking about faith to faith voters, but instead the vice president is being who he authentically is—which is a person of faith—and that is obviously coming across,” John McCarthy told NPR in September.

As for his political positions, Mr. Biden wrote in a December editorial for the Religion News Service, “My faith teaches me that we should be a nation that not only accepts the truth of the climate crisis, but leads the world in addressing it.”

Just before the election, Mr. Biden wrote in The Christian Post, “My faith implores me to embrace a preferential option for the poor and, as president, I will do everything in my power to fight poverty and build a future that moves us closer to our highest ideals—not only that all women and men are created equal in the eyes of God, but that they are treated equally by their fellow man.”

Joe Biden has had to contend with critics who point out that his support for abortion rights and same-sex marriage puts him at odds with the teachings of his church.

Still, Mr. Biden has had to contend with critics who point out that his support for abortion rights and same-sex marriage puts him at odds with the teachings of his church. Ahead of the election, some church leaders said Catholics should not vote for Mr. Biden because of those views, while others said Catholics have the freedom to come to their own decisions in the voting booth.

Speaking to America in 2015, Mr. Biden said he personally believes life begins at conception but said he recognizes others do not share his view.

Mr. Biden’s campaign described the election as “a battle for the soul of the nation.” He spent much of the campaign focused on various crises gripping the nation, including intense polarization, racial injustice and the coronavirus pandemic. In a video released during Holy Week, Mr. Biden again turned to his faith.

“For many,” he said, “faith will help us get through this crisis that grips this nation today.”