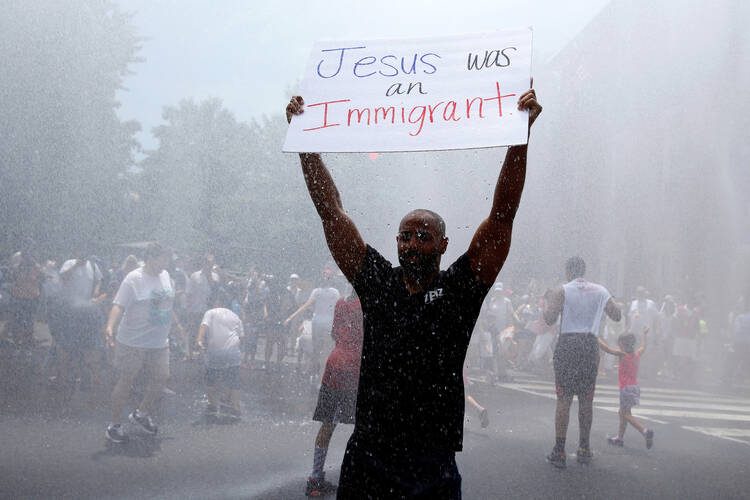 A man holds up a sign as he stands in a spray of water from a fire truck during a late June rally by immigration activists to protest against the Trump administration's immigration policy outside the White House in Washington. (CNS photo/Joshua Roberts, Reuters)

A new proposal from the Department of Homeland Security could make it much more difficult for legal immigrants to get green cards in the United States. But even before its implementation, the proposal has led immigrants to avoid receiving public benefits, according to Juan Torres of Catholic Charities in Santa Rosa, Calif.

“A number of people have come forward and asked to be removed from their benefits,” Mr. Torres told America. One man with an open wound on his leg, who had Medicaid, refused medical attention. “He thought he would be tracked down and deported by the government.”

While it has been talked about for months, the Trump administration just recently released an official proposal that would change how public benefits will be used to evaluate applications for lawful permanent residence.

When an immigrant applies to be a lawful permanent resident, the federal government determines whether the individual is likely to become a “public charge,” or a person who is dependent upon the government. For more than 100 years, being a public charge has been a “ground of inadmissibility and deportation,” according to U.S. Citizenship and Immigration Services.

“A number of people have come forward and asked to be removed from their benefits.”

The proposal would add six additional benefits, which cover nutrition assistance, housing and healthcare. Taken together, the benefits would include:

D.H.S. is also considering adding the Children’s Health Insurance Program to the list.

“Under long-standing federal law, those seeking to immigrate to the United States must show they can support themselves financially,” Kirstjen Nielsen, the Secretary of Homeland Security, said in a statement, noting the 60-day window for public comments. Ms. Nielsen said the rule is intended to “promote immigrant self-sufficiency and protect finite resources by ensuring that [immigrants] are not likely to become burdens on American taxpayers.”

It is a shift from considering monetary benefits alone to counting other services when judging if a person would become a public charge. An immigrant who receives these services would be less likely to be granted a green card under the proposal.

While it may sound like a cost-saving measure, Mr. Torres said misinformation about the change has already frightened immigrants away from certain services. Some fear, despite the changes not yet being implemented, that they will be denied permanent residence if they get the help they need.

“Rumors have a huge impact. Once a rumor starts, it spreads quickly,” Mr. Torres said, adding that people are more likely to believe their “comadre,” or friend, than outreach workers.

Mr. Torres met a young mother and her daughter, both asylees, who refused benefits. While refugees and asylees would be exempted in the proposal, the young mother did not want to risk being returned to the drug war in her native state of Michuacan, Mexico.

“People just assume the conversation is about undocumented immigrants. It’s not. These are people who followed all the rules to come to this country.”

D.H.S. estimates 380,000 people a year would be directly impacted by the rule change, but the Migration Policy Institute calculates that the change could discourage millions from accessing health, nutrition and social services. For example, fear may lead parents to disenroll their U.S. citizen children from services, like Medicaid or food stamps, according to the institute, which based these forecasts on an analysis of similar public charge changes in the 1990s.

“People just assume the conversation is about undocumented immigrants. It’s not,” said Lucas Swanepoel, vice president of social policy at Catholic Charities USA. “These are people who followed all the rules to come to this country.”

Catholic Charities serves 1 in 9 individuals in need of food assistance in the United States. If the federal government implements the proposed changes, Catholic Charities would absorb an estimated $24 million in services that would no longer be covered, according to Mr. Swanepoel.

“Any applicant under 18 starts out with a negative mark because children do not work,” Mr. Wheeler said. “By definition, they are considered likely to become a public charge, but I think that’s absurd.”

If an immigrant has a medical condition, that will make it harder to become a lawful permanent resident, he said. Having income below 125 percent of the federal poverty level, or $25,975 for a family of three, would also be counted against an applicant. A third of previous applicants had an income below this level.

According to the Keiser Family Foundation, 94 percent of noncitizens who entered the United States without lawful permanent resident status would have at least one attribute D.H.S. now counts as a negative factor. More than 40 percent would have a “heavily weighed negative factor,” which would be more likely to disqualify a green card applicant.

The language in the 183-page proposal can be confusing, according to Clay O’Dell, director of member advocacy at the Catholic Health Association. There is also a discrepancy between a previously leaked version and the official proposal. The nuances can be lost by those who may be directly affected, he said, and anxiety can fuel rumors.

“It just doesn’t come across when people say, ‘Oh I heard this,’ or ‘No, I heard that,’” he said. Many medical providers believe a “chilling effect” on immigrants receiving services is already taking place.

“Any applicant under 18 starts out with a negative mark because children do not work. By definition, they are considered likely to become a public charge, but I think that’s absurd.”

Over the years, many states have streamlined the benefits enrollment structure for immigrants, Mr. O’Dell said. Immigrants in states like New York or California, for example, end up applying for multiple benefits mentioned in the proposed changes.

“They’re going to have to start picking that apart,” he said. “This will be a logistical nightmare.”

The net impact will go far beyond the self-sufficiency the proposed changes are said to target, Mr. O’Dell said. “You don’t have to be a conspiracy theorist to know what the purpose is. [The Trump administration is] not only trying to restrict legal immigration, but even the type of immigrant…They’ve made no secret of this. It’s one of their goals.”

Mr. O’Dell alluded to a number of Trump administration initiatives to curb both legal and illegal immigration. More than a year ago, Attorney General Jeff Sessions announced the termination of the Deferred Action for Childhood Arrivals program, a policy that protected undocumented immigrants who came to the United States as children from deportation.

Last April, Secretary Nielsen announced the administration would crack down on so-called loopholes available to those who seek asylum in the United States. Homeland Security has also ended Temporary Protected Status for U.S. residents from seven countries, including more than 250,000 Central Americans.

Mr. O’Dell said the changes to the public charge rules are not addressing an existing problem. “No one out there is calling for this,” he said, adding that he does not believe the health care aspect has been fully considered.

Without the benefit of health care, for example, Mr. O’Dell said immigrants could be caught “in a cycle of poverty.” While some immigrants start out with little money, they usually increase their income significantly over time, he said.

“If you ask immigrants why they came to this country, they’ll tell you. It’s not for the public benefits. They came here to work and to succeed. But that’s not what’s being talked about.”

D.H.S acknowledges a number of consequences of the proposal on page 157 of the proposed revisions. The authors of the revision note “worse health outcomes, including increased prevalence of obesity and malnutrition, especially for pregnant or breastfeeding women, infants or children, and reduced prescription adherence.”

Emergency room visits will go up, according to D.H.S., communicable diseases will be more prevalent and uncompensated care will rise. D.H.S. also expects increased rates of poverty, housing instability and “reduced productivity and educational attainment.”

“They acknowledge this is bad for public health, and they’re going to do it anyway,” Mr. Swanepoel said. “If you put the human person first, there is no way to justify this.”

The proposed rule has gone through a number of changes thanks in part to advocacy groups, according to Ashley Feasley, director of migration policy and public affairs at the U.S. Conference of Catholic Bishops. Nevertheless, she said it remains problematic.

“It makes decisions based entirely on [immigrants] future earning ability,” she said. “But the concept of family is not tied to monetary earning capacity.”

A stay at home parent, for example, may not have an employment history and therefore may not qualify for a green card, she said. Some may be caretakers for older parents.

“This is creating a false narrative about self-sufficiency and its meddling into how families take care of each other,” Ms. Feasley said. “People think this is just about immigration, but it really is a much broader, health, family and nutrition issue.”

Mr. Torres was a little boy when he first came to Catholic Charities. The migration services helped his family and, eventually, he and his three siblings went to college.

“We pay our taxes and we’re here supporting our community,” he said. “If you ask immigrants why they came to this country, they’ll tell you. It’s not for the public benefits. They came here to work and to succeed. But that’s not what’s being talked about.”

Jesus was an immigrant? Ok that's fair. Funny how he was fleeing the baby killing party of Herod-the same party AMERICA's staff seems to love-the party of perpetual poor people immigration-the Democrats. Say what you want but the war on European Americans and their distant relatives from Europe means people with scant economic means will continue to come in droves and turn America reliably pro abortion, pro gay marriage, pro socialist and anti Patriot. Why champion this train wreck immigration frenzy for the poor and downtrodden when there are counties in West Virginia that are bone crushing poor? Why can't we consider Catholics like my mother who worked till she was 77 thanks to a pittance from Social Security? Why not champion BIG CATHOLIC FAMILIES from whence come ABUBDANT VOCATIONS for religious life and secular priesthood? It also means healthy seminarians and not gay guys in the sacristy and confessional. How bout a pulpit that proclaims the Gospel of Life? How bout economic policies that assure that Central American families have a daddy at home cause we no longer subsidize produce farms in California that dad's flock to that means that Junior seeks out father figures in drug gangs that then prey on American kids everywhere with cheap Mexican black tar heroin when Central Americans and Mexicans can grow strawberries? Why bemoan a cutoff in welfare benefits when it means more for poor Americans? What about them? Preach Church doctrine, open perpetual adoration chapels across America and kick out gay seminary "vocations" directors and let's get some revved up Catholicism!!