What next? El Paso faith community shares stories of fear and anger in shooting aftermath

What next? El Paso faith community shares stories of fear and anger in shooting aftermath 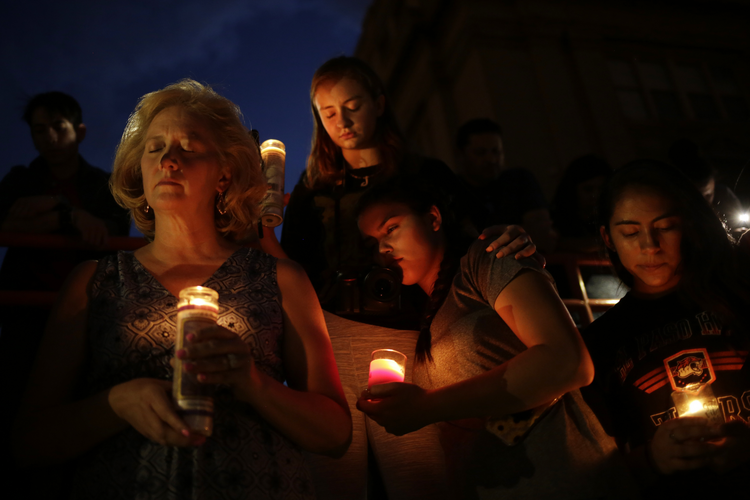 Mourners take part in a vigil near the border fence between Mexico and the U.S. after a mass shooting at a Walmart store in El Paso, Texas, Aug. 3, 2019. Pope Francis joined other Catholic Church leaders expressing sorrow after back-to-back mass shootings in the United States left at least 31 dead and dozens injured in Texas and Ohio Aug. 3 and 4. (CNS photo/Carlos Sanchez, Reuters)

The Rev. Pablo Matta was one of a number of priests who visited El Paso hospitals in the hours after a gunman with a high-powered rifle opened fire Aug. 3 in a Walmart massacre that took 22 lives. Investigators believe the assailant was motivated by anti-immigrant sentiments, the Associated Press reports.

“I saw a lot of the people that died,” Father Matta said. There was a lot of security at the hospital, he said, and people were in a state of shock. Father Matta met a woman at one hospital who was there with her husband, who had been shot. Her son had also been shot but was at a different hospital.

“You could see it on her face that things weren’t registering,” Father Matta said. “She was torn. She didn’t know where to go.” Her husband died, but Father Matta said he was conscious when he was given last rites.

The priest also visited a 90-year-old woman whose 90-year-old husband was killed. “”I’m to pray with you,” he said to her as she woke up.

“My husband is dead!” she cried to him in Spanish. “I saw him get shot.”

“Why would anyone want to shoot a 90-year-old couple?” Father Matta said.

This question and countless others haunt the mourning community of El Paso, Tex.

“Why is this happening?” Dolores DeAvila said of the shooting. “We’re a largely Hispanic community, but all of us—Anglo, Hispanic, Black—we all get along.We have been known as one of the safest cities in the nation.”

“Why would anyone want to shoot a 90-year-old couple?”

The Sunday after the shooting, Mass at St. John Paul II Church began with candles representing the victims, Ms. DeAvila said. Instead of saying good morning, parishioners were encouraged to give each other hugs.

“There’s a lot of grief,” she said. Ms. DeAvila, a leader with El Paso Interreligious Sponsoring Organization/Border Interfaith, has spoken with many who lost loved ones in the shooting or were in the vicinity. She described the panic that ensued in nearby restaurants, including one where people hid in a walk-in cooler. “We say we’re prepared [for a mass shooting], but we’re not,” she said.

EPISO/Border Interfaith is organizing a community event on Aug. 8 at St. Paul Church, where Father Matta is pastor. In addition to fear, Ms. DeAvila said there is a lot of anger around assault weapons.

“This is a community that was attacked and they understand that,” Joe Rubio, director of the West/Southwest Industrial Area Foundation, a network of community organizations, said of the attack.

“There is incredible grief, and it’s starting to turn into anger. People are starting to look for someone to blame for this,” Mr. Rubio said. “The church can take part in helping to shape people’s reaction to this. Not just by having a vigil, but in a way people can create public accountability for who bears responsibility for unleashing this kind of destruction and hate.”

Mr. Rubio believes there should be an organized response supporting restrictions on assault rifles and background checks for individuals seeking to purchase firearms. “There’s a prophetic role for the church to play in this conversation,” he said. “We’re going to either proactively save people or they’re going to pay with their lives.”

Dylan Corbett, executive director of the Hope Border Institute in El Paso, agreed that steps need to be taken to address gun control, but he said the focus needs to be on racism. “Latinos in this community have a target on their backs,” he said.

On the day of the shooting, where children were in Walmart for back-to-school shopping, Mr. Corbett said his children, who identify as Latinos, were doing the same thing at a different store.

“This was a human sacrifice to the god of xenophobia.”

Mr. Corbett said he did not know what to make of President Trump’s scheduled visit to El Paso this week. “I cannot imagine how he would consider that appropriate right now,” he said. “We need a leader that brings people together. We don’t have that.”

The shootings are “the fruit of those seeds of hatred” that have been a part of Mr. Trump’s rhetoric surrounding immigration, he said. “This was a human sacrifice to the god of xenophobia.”

Michael Okińczyc-Cruz, executive director of the Coalition for Spiritual and Public Leadership, said the shootings require the nation to admit it “has never truly healed from the evil of racism.”

“The racially motivated murder of Mexican Americans and several Mexican nationals this past weekend in El Paso is another visceral and devastating example of the perpetual power and force of the ideology of white supremacy that continues to warp the minds, spirits and hearts of many white young men,” he said in an email to America.

Mr. Okińczyc-Cruz, who works through racial tensions in the Chicago area, said Christians are called to “love our enemies” and resist a debate that pits one side against the other. “True love demands courage, solidarity, honesty and risk,” he said. “It also requires us to face the demons of our nation’s past and present, to call forth the depths of courage and moral strength within each of us, to work together for a fundamental moral reform that our nation urgently requires, to face our enemies even during the most terrorizing of times and to seek the conversion of their hearts and spirits.”

No mention of Dayton?

As racism becomes less of a part of society it has to be resurrected at every opportunity.

Trump said it was in Toledo.

Judith
Yes Judith and Obama said there were”57 states”!
I congratulate you: Snide even in the face of despicable evil!

“Racism becomes less…” Another reality-denial big lie… It reminds me of the popular Asian set of 3 monkey figurines acting as if they “hear nothing”, “see nothing”, “and “know nothing”.

When someone-a racist- described other fellow human beings as invaders, rats, and asked his audience what to do with invaders, and the audience said "shoot them" "send them back", (“them” means those the racist described as invaders) and the person-the racist- who described others as invaders grinned in acknowledgement of his audience’s response. And months later, another person -a fellow racist-committed evil by mass shooting those- that have been described by the earlier racist -as invaders, how does one relate to that? The god father rapist described those who do not look like him as “invaders” “rats”, “rapists”, “drug dealers”. That same shooter described those he killed as invaders. How does one relate to that when one racist’s language mirrors the language of the other racist?

Yet we must solve this problem of racism. This is why I ask simple questions which border on the challenges of solutions to this racism because solutions must proceed from the capacity to understand, empathize and then proffer solution. One cannot solve the problem of racism if one cannot condemn it, and empathize genuinely with the dead victims and the living survivors of the evil of racism.
So:

May the God of mercy, love, kindness, empathy console and comfort the family of the dead-the victims and survivors of the evil of racism. May the souls of the dead rest in the peaceful and heavenly bosom of our Lord Jesus Christ-Amen.

Adeolu, thank you for your thoughtful, consistent truth-telling.

There is a small consolation in the reality that, with the exception of the first comment here, I have not seen or heard anyone anywhere deny that what happened in El Paso was a racist, xenophobic massacre.

JD, thank you for this article.

Trump's teleprompter speech was so inadequate. To stay on the NRA's good side, he blamed mental illness and video games for the shooting instead of access to assault-style weapons, even though experts have said mass shooters are very rarely mentally ill or watchers of violent video games. And naturally Trump failed to take responsibility for the part his hateful language had in prompting the shooting.

Maybe, at least, the Dover incident will lay to rest the "good guy with a gun" nonsense. The cops laid out the shooter only 32 seconds after he began. In that short time, he killed 9 people. The survivors will suffer in varying extents from their severe injuries for the rest of their lives. The ideology or mental state of the shooter doesn't matter. It's the lethality of these optimally lethal small arms that need to be taken from private ownership and melted down.

Yeah, in both Texas and Ohio people could carry guns, but apparently no civilians shot back at the assailants.

At this point, it is apparent that stricter background checks will not be enough. These weapons can still be legally acquired. But, it is something, and I would support it. It just may get us on the slippery slope to a semi-automatic high powered rifle ban.

That a paradigm shift seems to have occurred with this attack on a Latino community, may be the one silver lining in this horrific terrorist attack. Unlike previous attacks, the media and the politicians are insisting that the narrative of "mental illness" coupled with a "gun control problem" not be a cover for denying that we have a terrorist problem derived from an evil ideology of our own. That white nationalism, white supremacism , racism are a systemic threat to US, and not just a problem of a lone wolf sicko, is a narrative we did not really hear, loud and clear before the El Paso massacre. Unlike the ones preceding,[ not done by a Muslim] the perpetrator is NOT being called an "alleged shooter", but a "suspect"and even sometimes on MSM a;"domestic terrorist."That IS a paradigm shift. He IS being named even when after the NZ massacre the media was adamant that that perpetrator not be.No more burying white nationalism, white supremacism ,racism under the rug ,of "mental illness","lone wolf", "better gun laws" but- irrelevant -to -the- body -politic, narrative.All a direct result of the El Paso terrorist attack.

That Republican right wingers, conservatives; the very groups whose consistent pervasive hateful narrative is to hold all Muslims and their religion accountable when some Muslims do evil, now are themselves being put on the defensive for the evil that is white nationalism, white supremacism, racism. is ironic.[Poetic justice?]And they don't like that!How unfair,painting all on the right with that brush, they protest.The smeared shoe is now on their foot.
That these horrific weapons that the US has been using for 2 decades now to kill men women and kids over there, has now been used against our own citizens, is ironic. Chickens coming home to roost [most horrifically in the case of the weapons being used ] , in both ways.

PS I do send my prayers to all the victims of both attacks and their families and communities.I am catholic ; we believe in prayer and the comfort of the communion of saints, the living and the dead, Jesus Christ with us.