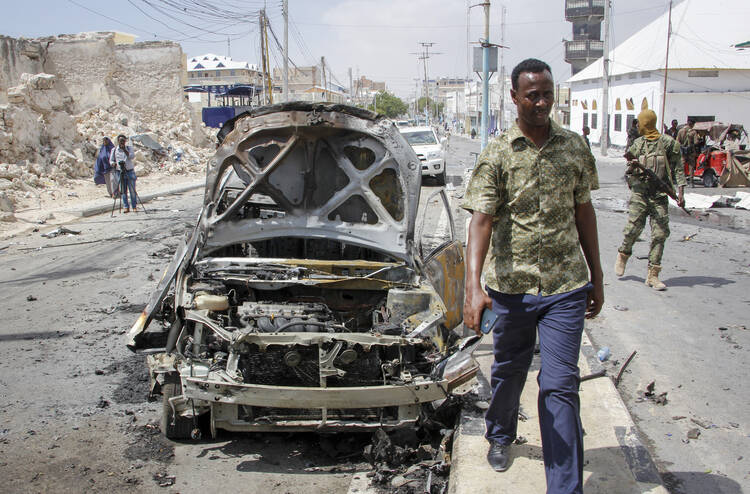 Security forces and others walk past the wreckage of vehicles after a vehicle bomb attack on a security checkpoint located near the presidential palace, in Mogadishu, Somalia, Wednesday, Jan. 8, 2020. (AP Photo/Farah Abdi Warsameh)

The Trump administration agreed to an 18-month extension of Temporary Protected Status for Somali immigrant residents in the United States on Jan. 17. That was good news for about 500 Somalis and their families now protected from deportation who had achieved that status before 2012, the last year Somalia was redesignated under the program. But the Department of Homeland Security chose not to redesignate Somalia as a T.P.S.-eligible state this time. That move had been sought by advocates who hoped to extend protected status to hundreds of other Somalis who arrived in the United States after 2012.

Jill Marie Bussey, advocacy director for Clinic, the Catholic Legal Immigration Network, called that decision “senseless and cruel,” pointing out in a statement released on Jan. 17 that security conditions in Somalia have not only failed to improve, “in some cases they are deteriorating.”

“In the past few weeks, Al-Shabaab has carried out a series of horrific attacks, including the Dec. 28 bombing that killed nearly 80 people in Somalia’s capital,” Ms. Bussey said. “These conditions are not safe for current T.P.S. holders, and they are not safe for the people who would have benefited from redesignation.”

According to Clinic, living conditions in Somalia “continue to be dire due to armed conflict, climate extremes…and devastating food shortages. At least 2.6 million people are displaced in Somalia and 5.2 million people, nearly half the population, are in need of humanitarian aid.”

The Department of Homeland Security chose not to redesignate Somalia as a T.P.S.-eligible state. One immigrant advocate called that decision “senseless and cruel.”

But the extension at least will allow current Somali T.P.S. holders to renew their residency status and work permits, and remain in the United States through Sept. 17, 2021.

Temporary Protected Status, established by Congress through the Immigration Act of 1990, is intended to shield foreign nationals in the United States from deportation when conditions in their home nations have become unsafe because of armed conflict, humanitarian crisis or natural disaster. The administration similarly issued an extension for T.P.S. holders from Yemen on Jan. 9 but did not redesignate Yemen, limiting deportation protection to Yemeni residents who arrived before 2017. That means thousands will remain subject to deportation back to a state engaged in an often-brutal civil conflict that has continued for years.

Somalis and Yemenis are only the latest immigrant communities whose status has come under critical scrutiny by a White House that has looked askance at the entire T.P.S. category. An estimated 325,000 migrants from 13 T.P.S.-designated countries currently reside in the United States. But tens of thousands of them have lost that status as the Trump White House pursues a policy, as one supporter of the White House’s T.P.S. posture put it, of “putting the ‘T’” for temporary back into the designation.

Over the last three years the administration has terminated protected status for about 98 percent of current T.P.S. holders, according to Jose Magana-Salgado, campaign coordinator for Clinic. Those terminations have for now been blocked by federal courts, but rulings in favor of the administration could begin a 120-day countdown for hundreds of thousands of T.P.S. holders to return home. Most have lived in the United States for more than 10 years and have started businesses or careers here; many have become parents to children who are American citizens.

The U.S. Conference of Catholic Bishops has deplored the idea of repatriating thousands of T.P.S. holders to troubled states in Central America, Africa or the Middle East, but resistance to that prospect emerges not only from the church, Mr. Magana-Salgado said. Former and current Department of State officials and advocates and analysts from nongovernmental organizations “consistently say these countries are too dangerous to return people to,” he said.

Somalis and Yemenis are only the latest immigrant communities to whose status has come under critical scrutiny by a White House that has looked askance at the entire T.P.S. category.

Church advocates and T.P.S. holders from these designated nations—they include Haiti, El Salvador and Honduras—insist that conditions remain grave to life-threatening back in their home countries and worry that a mass repatriation would devastate U.S. communities where T.P.S. holders reside and work. According to Mr. Magana-Salgado, career officials at multiple federal agencies he has spoken to believe returning T.P.S. holders to home countries will destabilize fragile states unable to absorb large influxes of returnees, separate T.P.S. parents from their U.S.-citizen children and other dependents, and in the end undermine U.S. foreign policy goals.

“The only folks who are saying that these terminations were a good thing were top officials at the administration. Virtually everyone else disagrees—on a policy basis, on a religious basis, on just a practical basis,” Mr. Magana-Salgado said.

Ashley Feasley, director of policy at the Office of Migration Policy and Public Affairs at the U.S. Conference of Catholic Bishops, pointed out that one of the criteria for terminating T.P.S. is that “the country of origin is able to safely accept the return of its nationals.” That prerequisite, Ms. Feasley argued, is simply being ignored as the White House presses to return T.P.S. holders to violence-wracked or unstable nations. U.S.C.C.B. fact-finding missions in 2017 to Honduras, El Salvador and Haiti “make the case,” she said, that there was no possible way those countries “could safely accept and integrate their nationals back.”

The Department of Homeland Security did not respond to requests for comment, and a spokesperson for the U.S. Citizenship and Immigration Services declined to respond to specific questions about the administration’s overall approach to the T.P.S. immigration category or explain why conflict-ridden states like Yemen and Somalia did not qualify for a redesignation of protected status, but the spokesperson did issue a brief statement. “The conditions that supported Yemen and Somalia’s current designations still exist,” the spokesperson said. “These designations were implemented by previous administrations and have and will continue. Over the past several years these protections have been extended nearly 30 times.” Immigration advocates say the administration’s resistance to renewal of T.P.S., redesignating existing T.P.S. classes or ordering new T.P.S. designations to respond to current international crises appear part of a comprehensive strategy.

“This is one of the many levers of their efforts to foreclose any sort of humanitarian assistance to nationals of other countries,” said Mr. Magana-Salgado.

A prerequisite for return, that “the country of origin is able to safely accept the return of its nationals,” is simply being ignored as the White House presses to return T.P.S. holders to violence-wracked or unstable nations.

Asked if the Trump administration seems intent to discourage just about any form of immigration into the United States, Ms. Feasely said, “I’d call that a fair characterization.”

“We’ve heard [that resistance] is about ‘illegal immigration,’” she added, “but the reality is that this is a statutorily approved program. These individuals submit themselves to vetting by the Department of Homeland Security; this is a legal humanitarian program that we are cutting.”

Unlike asylum seekers or other immigrants, T.P.S. holders have few options to forestall deportations to their nations of origin, whatever awaits them there, should their status be terminated. The legislation that created the program did not pay much attention to the fate of T.P.S. holders if their U.S. residency proves anything more than temporary. Currently the programs provides no path to citizenship, according to Ms. Feasley, even though thousands of T.P.S. holders have by now lived in the United States for 20 years or more “and are rooted in the community.”

“The last time T.P.S. was debated in Congress, George H.W. Bush was in office,” Ms. Feasley said. “Until the Trump administration basically began to attack the T.P.S. program as a legitimate humanitarian protection, I don’t think that there was a lot of awareness about who T.P.S. holders were, what they mean to our country in terms of their contributions to our communities and what exactly the protection meant.”

Legislation meant to resolve that dilemma passed the House of Representatives last June but now faces a hard slog in the U.S. Senate. U.S. bishops have thrown their support behind H.R. 6, the American Dream and Promise Act. It creates a path for citizenship for T.P.S. holders and addresses the status of “Dreamers,” current residents brought without documentation into the United States as children, and other problematic immigration categories.

Until that legislation or something like it is passed, hundreds of thousands of T.P.S. holders—parents of 273,000 U.S.-born children—and their families will continue to live in acute uncertainty, Ms. Feasely pointed out. “We need to integrate [T.P.S. holders] and allow them full status and participation in American life, which is citizenship,” she said.

Mr. Magana-Salgado hopes that U.S. Catholics will endorse a merciful response to the plight of T.P.S. holders hoping to remain in the United States and press their elected officials to do the same. “I think Catholic teaching says that we welcome the stranger, that we help those who need the most help and help vulnerable populations,” Mr. Magana-Salgado said. “At the end of the day it’s incumbent on all Catholic Americans to stand up and communicate to this administration that we have to welcome these people. They’re our neighbors, they’re friends—many have been for decades. And our country, our communities, our congregations are better off if they stay in the country.”

@ClarkeAtAmericaclarke@americamedia.org
Show Comments ()
Join the conversation: Login or create an account
Before you can comment, you need to update your profile to include your first and last name, as required in our comments policy. Then reload this page and you'll be set up for commenting. Update your profile
Show Comments ()
Comments are automatically closed two weeks after an article's initial publication. See our comments policy for more.