One year later, how has Trump’s ‘Remain in Mexico’ policy affected asylum seekers? 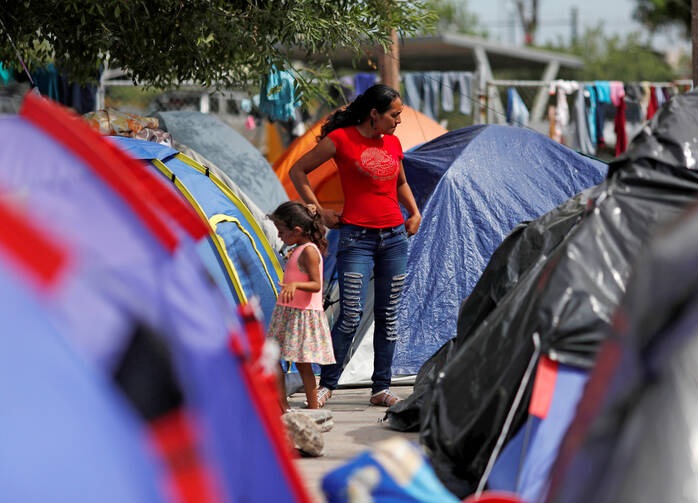 Central American migrants who were returned to Mexico from the U.S. under the Migrant Protection Protocols, are seen Sept. 14, 2019, outside their tent in Matamoros, Mexico. Sister Norma Pimentel, a member of the Missionaries of Jesus, who is executive director of Catholic Charities of the Rio Grande Valley in Texas and a longtime advocate for immigrants and refugees, said about 2,000 families have camped out on the Mexico side in Matamoros while they wait to be called for their asylum cases. (CNS photo//Henry Romero, Reuters)

One year ago, the Trump administration began implementing the Migrant Protection Protocols, which empowered immigration officials to return thousands of asylum seekers to Mexico while their cases were decided by the U.S. immigration court system. The Department of Homeland Security said the policy, known as “Remain in Mexico,” would address the escalating number of asylum claims.

In a way, it has, according to Dylan Corbett, executive director of the Hope Border Institute in El Paso, Tex. “Inflicting cruelty is the motive behind a policy like this,” he said. “It’s meant to be a deterrent.”

Of the 7,000 asylum cases that have been completed in the El Paso sector since the policy was implemented, Mr. Corbett said, only 15 individuals received asylum—a denial rate of more than 99 percent.

“Inflicting cruelty is the motive behind a policy like this,” he said. “It’s meant to be a deterrent.”

In comparison, New York, Los Angeles, San Francisco, Houston and Miami together completed more than 85,000 asylum cases over the same period in 2019, with an average denial rate of 50 percent, according to Syracuse University tracking. Overall, immigration courts denied asylum at its highest rate ever last year, with 69 percent of cases being denied asylum. Nevertheless, immigration courts granted asylum to nearly 20,000 individuals last year, more than doubling the number from 2014.

Ashley Feasley, director of policy at the Office of Migration Policy and Public Affairs at the U.S. Conference of Catholic Bishops, said tens of thousands have been waiting for their court date for months in “circumstances that are not sustainable.”

On a recent trip to Matamoros, Tamaulipas, Ms. Feasley encountered pregnant women and sick children who “should not be subject to these kinds of conditions.” Crowded shelters in Mexico have had problems with sanitation and have run out of space, leaving asylum seekers on the streets. That asylum seekers are willing to suffer through these situations is a testament to the sincerity of their cases, Ms. Feasley said.

“This is a blatant attempt to end access to asylum,” she said. Few, despite experiencing traumatic events in their home countries and on their journey north, have access to mental health services, Ms. Feasley said. And while the U.S. government does not mandate that asylum seekers be given legal counsel, groups that offer free services feel thwarted in their attempts to connect with those in need of attorneys, she said.

Immigration courts denied asylum at its highest rate ever last year, with 69 percent of cases being denied asylum.

Few asylum seekers appeal their cases, Sister Pimentel said, adding that the decision to grant asylum often hinges on which judge hears the case. Syracuse University has found a number of judges with a denial rate above 90 percent.

Over two months, a number of humanitarian groups on both sides of the border have been coordinating efforts to provide direct assistance, legal counsel and mental health care for asylum seekers waiting in camps, Sister Pimentel said. A United Methodist group, for example, brings water bottles twice a day, while others work to purify water from the river. The network has also been providing and maintaining more toilets.

“These families shouldn’t be here,” Sister Pimentel said of the camps in Mexico. “They are asylum seekers that should be given a fair, due process chance in the United States. They should be given the chance, with an attorney, to make their case. We need a new policy that is more humane and respects the dignity of every person.”

“These families shouldn’t be here. They are asylum seekers that should be given a fair, due process chance in the United States.”

But, according to Ms. Feasley, it is growing increasingly difficult to draw attention to the camps. She said that many on Capitol Hill now think of the asylum seekers as Mexico’s problem. Both Democrats and Republicans in Congress, to varying degrees, no longer see the border crisis as a pressing concern, she said. But the numerous reports issued on the anniversary of the policy help raise awareness.

The Hope Border Institute released two studies this week, detailing the impact of the Remain in Mexico policy. The first study, a situation report, explains that 60,000 asylum seekers were returned to Mexico because of the policy, 25 percent of whom were children. Most children cannot continue their education while they await their court hearing in Mexico, according to the report. In Ciudad Juarez, just south of El Paso, there is not enough shelter space to accommodate those awaiting an asylum hearing and only around 3 percent of asylum seekers have found legal help for their cases.

“By sending asylum seekers to Mexico, the Trump administration has effectively diverted public attention away from abuses against migrants and the attack on asylum at the border,” Mr. Corbett said in the study’s introduction. “Now, the attention of the media and political leaders is faraway, focused on impeachment and another election cycle.”

In Ciudad Juarez, migrants have been victims of robbery, assault, extortion, trafficking, kidnapping and murder. The city averages four murders per day, the highest number since 2011. The report also shares stories from asylum seekers, including a 19-year-old Honduran woman who was separated from her daughter for months because of the policy.

The second report, conducted by Stanford University’s law school for the Hope Border Institute, argues that Mexico may have violated a number of human rights treaties by cooperating with the Remain in Mexico policy. The findings of the report “suggest that Mexican authorities have committed and failed to protect, investigate, and prosecute the extortion, arbitrary detentions, kidnappings, forcible disappearances, torture, and life-threatening injuries of migrants in violation of the right to life, liberty, and security, freedom from torture, freedom of movement, and non-discrimination.”

Despite these troublesome findings, the D.H.S. announced this week that it was expanding the Remain in Mexico policy to include Brazilian nationals arriving at the southern border. In a statement released on Jan. 29, D.H.S. called the policy a “cornerstone” of its efforts to “restore integrity to the U.S. immigration system and relieve the crushing backlog of pending asylum cases. Our nation is more secure because of the program.”

Mr. Corbett disagrees. “[The program] is motivated by a policy of exclusion, and the Trump administration has only doubled down on that over the years,” Mr. Corbett said. “It will change in the future, but for now we’re resisting a politics of hate.”