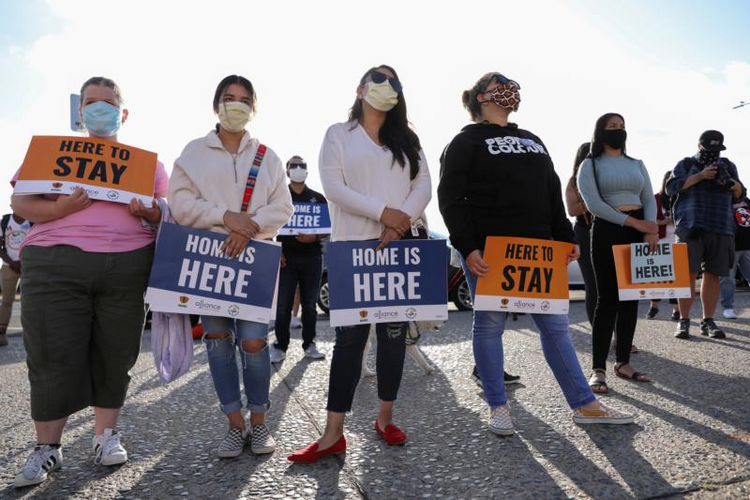 Demonstrators in San Diego rally in support of the Deferred Action for Childhood Arrivals program June 18, 2020. In one of the most anticipated cases of the term, the Supreme Court ruled that same day against efforts by the Trump administration to end DACA. (CNS photo/Mike Blake, Reuters)

PHOENIX (CNS) -- For Cinthia Padilla Ortiz, the Supreme Court's recent decision on the DACA program was "an unexpected and beautiful moment" and left her feeling "that sense of hope in our community."

"When I read the decision -- there are moments where there are no words to describe the feelings," the recent law graduate from Loyola University New Orleans told Catholic News Service.

"There was a mixture of feelings because I felt thankful and optimistic about this decision due to the fact that earlier this week we had a favorable decision on another civil rights case for federal workers who identified as part of the LGBT community," she added.

On June 18, the U.S. Supreme Court in a 5-4 ruling said President Donald Trump could not stop the Deferred Action for Childhood Arrivals program with his 2017 executive order. DACA protects about 700,000 young people who qualify for the program from deportation and allows them to work, go to college, get health insurance and obtain a driver's license.

The program was established by President Barrack Obama with an executive order in 2012 to allow young people brought into the country illegally as minors by their parents to stay in the United States.

The court ruled that the manner in which Trump terminated the program was not correct. So although this has given DACA recipients time to breathe and renew their DACA status, the court's decision also plays in favor of Trump, so the president could still end it if he follows different steps.

Law professor Laura E. Gomez at the University of California, Los Angeles said Trump could start the process over again to end DACA.

"President Trump was contending that since the program was made by executive order, all they had to do to rescind it was to announce via executive order that it was done," said Gomez. "What the court said in this case was that it was not sufficient."

"Because the program existed for eight years and those people who have DACA status have relied on the benefits of that law like work permits, the court said that since they have a reliance interest -- they have relied on having that right to work in choosing their educational, training or via home and starting a family -- because they have relied on that, the government has to rationally justify why they are taking that away," she added.

"Yes, the Trump administration could say on Monday, 'OK, we are going to rescind DACA and here is our 30-page memorandum. We have looked at it in detail and here is what we have come up with."

Gomez said although there is a possibility that DACA could be rescinded, even Republicans were pleased with the Supreme Court's decision, which indicates to her that Trump is likely not going to be taking down DACA before the presidential election in November.

However, Trump has already gone on Twitter and said he will immediately seek to resubmit the process to end DACA. He also said court decision has given him more power than anticipated.

For some college students, like Nelson Martinez del los Santos, the decision came with initial excitement and optimism, but soon the reality of what door it left open hit him, that door that leads toward DACA's termination.

"I was sleeping, and my mother and sister run through the door screaming that they kept DACA," said del los Santos, a junior at the College of the Holy Cross in Worcester, Massachusetts.

"I was very excited in that moment," he told CNS. "Now that I educated myself and learned about what is actually going on, yes -- the Supreme Court sided with DACA, but they, more or less, just did not agree with the way the Trump administration went about it."

"I am just hopeful that the people of this country can see the humanity in this program," he added. "As for my future, the DACA program is uncertain, but that is not going to stop me or anyone else in the DACA program in achieving what our parents came here to give us -- that immigrant dream."

Another thing to note in the Supreme Court decision was the lack of condemnation of racial bias by Trump in his DACA order; the ruling concluded there was no racial animus on the part of the president. Only Justice Sonia Sotomayor, who was in the majority on the ruling, disagreed with this conclusion on bias and wrote a separate opinion.

"Not a lot of people have talked about the fact that even though 100% of the Supreme Court majority, the five justices in the majority, did the right thing but did not go far enough," said Gomez. "If you look at Sotomayor's opinion, she is both agreeing with Chief Justice of the United States John Roberts (who wrote the majority opinion) but is disagreeing with him.

"Out of the nine Supreme Court justices in the court, she is the only one who believes the decision should have allowed all the plaintiffs to continue with their lawsuits saying that the law was racially bias and discriminatory."

"The lower courts' judges, many of them, had agreed that there was plausible concern of racial discrimination," she added. "The case had not gone far enough for the plaintiffs to introduce their evidence and have a full-blown hearing. If the Supreme Court would have ruled the way Sotomayor wanted it to, then that hearing would have been playing out just as we are getting up to the election."

Ortiz noted that DACA recipients have lived in the United States for the majority of their life and identify as Americans, and are deserving of the moral support of their communities.

They have made positive contributions to this country. For example, a CNN article pointed out that an estimated 29,000 DACA recipients are health care workers. In addition, a 2018 report from the Institute on Taxation and Economic Policy estimated DACA recipients contribute $1.7 billion dollars in taxes annually.

"Dreamers, as a community, share a common collective characteristic -- we all arrived in the United States when we were children," said Ortiz. "Children should not be punished, held hostage or be a political pawn ever."

"We are helping Dreamers who identify as American to stay at home and continue the natural progression of them becoming the best version that they can be and serve their community here in the United States," she added.

Nelson said he wants people to realize there are good people in this program. DACA recipients have to be ideal American citizens, because any mistake can get them deported.

"At the end of the day, they are good people and they are people first before (they are) immigrants," said del los Santos. "They are trying to do the best they can for their family. That is an idea that everyone can believe in and respect. A lot of what that looks like for people in Latin America is going to a country that has better safety, better opportunities, better quality of life and striving to maintain that while you are here."

As she looks back, Ortiz said she had to overcome many financial and mental hurdles due to the limitations put on DACA recipients.

"I am an 'A' student," said Ortiz. "I graduated with a 4.0 from high school as a distinguished scholar. My mind was set on Harvard University and subsequently Harvard Law," and instead she went to law school at Loyola University New Orleans.

"Digesting the fact that I had to reinvent my dream, keep myself afloat with optimism and protect my mental health has been the biggest challenge of my life," she explained.

"Some Dreamers gave up on their dream," she said, but she was able to reinvent her dream.

Provide feedback on this article
Join the conversation: Login or create an account
Before you can comment, you need to update your profile to include your first and last name, as required in our comments policy. Then reload this page and you'll be set up for commenting. Update your profile
Advertisement
More: Supreme Court / Immigration / Youth