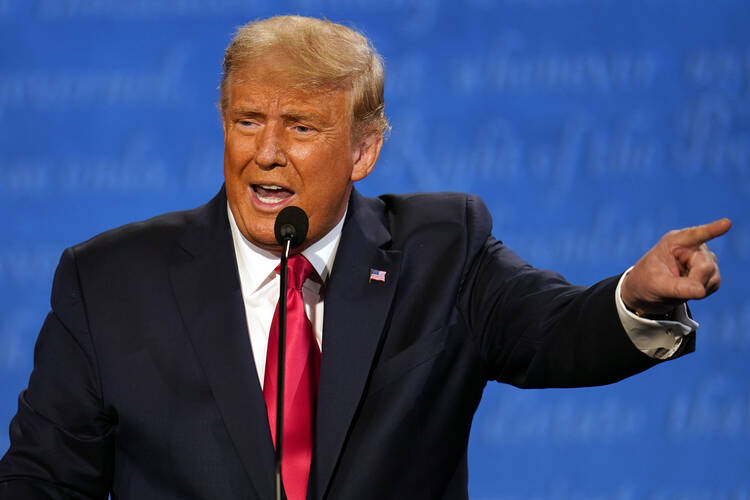 President Trump and Vice President Joe Biden discussed a range of policies—from Covid-19 to race relations—during last night’s presidential debate. While neither campaign has made immigration a central talking point, moderator Kristen Welker of NBC News asked both candidates to address the issue.

Ms. Welker asked Mr. Biden why the Obama administration failed to deliver their much-promised comprehensive immigration reform and about the administration’s record number of deportations—higher than that of any other administration.

“Because we made a mistake,” Mr. Biden said. “It took too long to get it right.” He went on to promise a pathway to citizenship for undocumented immigrants living in the United States, including for recipients of the Obama-era Deferred Action for Childhood Arrivals program.

Ms. Welker asked Mr. Trump about the administration’s zero-tolerance policy, which led to the separation of 4,000 children from their parents, 545 of whom have yet to be reunited. Mr. Trump ended the policy a month after it began.

“Children are brought here by coyotes and lots of bad people, cartels, and they’re brought here and it’s easy to use them to get into our country,” Mr. Trump said.

“Children are brought here by coyotes and lots of bad people, cartels, and they’re brought here and it’s easy to use them to get into our country,” Mr. Trump said. “We now have a stronger border than we’ve ever had. We have over 400 miles of brand new wall, you see the numbers, and we let people in, but they have to come in legally.”

But how will the administration reunite the children who are still separated from their parents? Ms. Welker asked. Eventually, after criticizing the Obama administration, Mr. Trump said his administration was working on it. “But a lot of these kids come up without the parents, they come over through cartels and the coyotes and through gangs,” he said.

This response was striking to Linda Dakin-Grimm, an immigration attorney who represents families who have been separated by the zero-tolerance policy. Mr. Trump, she said, appeared to conflate unaccompanied minors at the border and the families who come asking for asylum.

“His immediate reaction was that they are trying to game the system,” she said. “He completely missed the subject matter. I think he has very little grasp of the facts.”

Ms. Dakin-Grimm, the author of Dignity and Justice: Welcoming the Stranger at Our Border, is working with a group of lawyers, the American Civil Liberties Union and Justice in Motion to reunite the families who were separated. “The government doesn’t want to reunite the children with their parents,” she said. “They don’t see it as their role.”

“The government doesn’t want to reunite the children with their parents,” Linda Dakin-Grimm said. “They don’t see it as their role.”

Some have said that the Bush and Obama administrations also separated children from their parents, but Ms. Dakin-Grimm said such occurrences were rare and only took place when there was suspicion of child trafficking. While the zero-tolerance policy is no longer in effect today, immigration officials will still separate children from their parents or caretakers if such suspicion exists.

“What the Trump administration did was not related to that,” she said.

Before its implementation, then-secretary of Homeland Security John Kelly and then-Attorney General Jeff Sessions described the zero-tolerance policy as a deterrent. When Catholic Charities USA, the Catholic Legal Immigration Network and the U.S. Conference of Catholic Bishops learned of the administration’s plans in 2017, they wrote a letter urging the administration to reconsider.

“We believe that separating families would be extremely detrimental to basic child welfare principles, contrary to our Catholic values and ineffective to the goals of deterrence and safety,” the two-page letter read. “We urge you to reject his harmful policy.”

Nevertheless, the administration launched a pilot program in 2017 before implementing the zero-tolerance policy in 2018.

“This was done to people who come with their heart in their hands to ask for our help, and we separate them from their children,” Ms. Dakin-Grimm said.

“This was done to people who come with their heart in their hands to ask for our help, and we separate them from their children,” Ms. Dakin-Grimm said. “They are largely running for their lives. Almost every case involves a murder or a rape.”

Christopher Kerr, the executive director of the Ignatian Solidarity Network, was pleased to hear the conversation about immigration on the debate stage, given neither candidate has focused on the issue, which is of critical importance. Mr. Kerr appreciated, for example, the attention Mr. Biden gave asylum seekers on the U.S.-Mexico border “sitting in squalor on the other side of the river” waiting for their court dates.

“It’s impacting tens of thousands of asylum seekers at the border,” he said. “To have a presidential candidate speak of them is significant. These are not U.S. citizens.”

Immigration officials return thousands of asylum seekers to Mexico while their cases are being decided by the U.S. immigraiton court system under the Migration Protection Protocols, known as the “Remain in Mexico” policy. The policy, according to the Department of Homeland Security, is intended to address the escalating number of asylum claims. D.H.S. suspended hearings for those waiting for asylum in Mexico in July because of the Covid-19 pandemic.

“The president is using the standard someone might use for a business. But we want to use a framework of inherent human dignity.”

During the debate, Mr. Trump criticized Mr. Biden’s inaction on immigration while serving as vice president, saying he “did nothing except build cages to keep children in.” The Obama administration did build the cages, or chain-link fence enclosures, for immigrants, The Washington Post reports. The administration built the enclosures in 2014 when the United States was receiving a large number of unaccompanied minors at the border. They were intended to be temporary holding cells, not living quarters.

“He’s right to point that out, the way our country was managing the needs of children,” Mr. Kerr said. “We can all remember the images of young people in detention.”

Yet Mr. Kerr said government leaders should ask themselves what the United States can do to be a good neighbor and how it can help other countries create a society where people no longer feel the need to migrate.

“Ideally, the next president will really look at the big picture of migration and address the root causes and do something for undocumented immigrants living in the United States,” Mr. Kerr said. “The president is using the standard someone might use for a business. But we want to use a framework of inherent human dignity.”