Bishop Braxton: How to come together in response to the gun violence epidemic 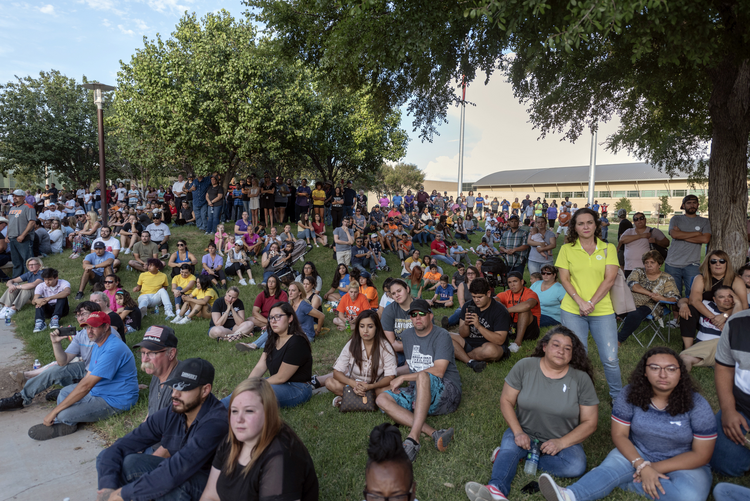 A vigil on Sept. 1, at the University of Texas of the Permian Basin, for victims of a shooting spree the day before in Odessa, Texas. (Jacy Lewis/Reporter-Telegram via AP)

We are facing a crisis of gun violence in the United States. I say this knowing well that hunters, those who use guns for recreation and those who have a gun in their home for security do not ordinarily kill people. The crisis is about a small number of gun owners who abuse the firearms that are readily available to them and about the lack of consensus on how to respond to what has become a daily occurrence of gun violence.

It is a crisis for which there is no easy solution. But as Christians, we are obliged to be a part of the conversation and the practical efforts to address this deadly crisis. We must listen, learn, think, pray and act.

As Christians, we are obliged to be a part of the conversation and the practical efforts to address this deadly crisis.

The events in El Paso on Aug. 3 and in Dayton, Ohio, on Aug. 4 caused sorrow, shock, anger and frustration in the hearts of most Americans. And even as I edited this pastoral reflection for publication, the country learned of yet another mass murder in Odessa, Tex., in which at least seven people died and more than 20 people were wounded. The causes of these horrendous acts of violence have not been determined, but there is mounting evidence that social media platforms are being used to create communities of like-minded people who reinforce each other’s ethnic and racial hatreds, encouraging acts of violence against those they define as enemies. Indeed, radicalization via social media may be a more likely impetus to violence than violent video games. And while there is certainly a need for greater assistance to people suffering from mental illness, several studies contend that diagnosed mental illness accounts for only a small percentage of mass murders.

When shootings occurred in Newtown, Conn. (2012); Charleston, S.C. (2015); San Bernardino, Calif., (2015); Orlando, Fla. (2016); Las Vegas (2017); Sutherland Springs, Tex. (2017); Pittsburgh (2018); Parkland, Fl. (2018); Christchurch, New Zealand (2019); and many other places, I wrote to parishes and schools asking everyone to pray for the innocent people whose lives were senselessly destroyed, that they may share in the eternal life promised to those who love God and neighbor. I also asked them to pray for civic leaders to have the courage and the wisdom to act decisively to prevent future massacres and, yes, to pray for the perpetrator. But in recent months, I have not done the same because these heartbreaking assaults on the value and dignity of every human life have been happening so frequently that it has not been possible to keep up. According to the Gun Violence Archive, there were 293 mass shootings (four or more victims) this year in the United States as of Sept. 9. One hundred people a day, and 36,500 people a year, die from gun violence.

Executing shooters will not stop gun violence. The solution requires us to overcome apathy.
The Editors

We talk a lot about negative triggers. Are there triggers for good?
Valerie Schultz

Beyond praying for the dead, suffering and grieving, for what should we pray? That God will put an end to the violence? God does not ordinarily intervene in human history and quiet the rage, bias and hatred that can invade the human heart, or remove the finger of the gunman from the trigger. Nor does God step in and bring representatives of opposing political ideologies together and guide them to reasonable compromise. Here on earth, God’s work must truly be our own.

We do know that words of comfort are not sufficient. We also know that American citizens (including our fellow Catholics) are deeply divided over the many questions surrounding the gun crisis in our country. One of the easiest ways to provoke an intense argument is to ask: Do we need stricter gun laws? Are Second Amendment rights absolute? Why is Congress unable to develop reasonable, common-sense gun legislation?

Many Catholics have told me they feel helpless, even paralyzed. I share this uncertainty and frustration. But I am convinced that we must do something.

Many Catholics have told me they feel helpless, even paralyzed. I share this uncertainty and frustration. But I am convinced that we must do something, as difficult and seemingly ineffective as our modest efforts might be. I invite all pastors, administrators, deacons, religious brothers and sisters, principals, parents, and community leaders to consider the modest proposals below as starting points:

Discussion groups need not be led by pastors or principals. Any group of the Christian faithful, including a family group, could conduct these activities in a rectory, convent, school or home. But these gatherings will bear little fruit if only like-minded people participate. Group leaders need to help all participants to listen with open minds. The goal is a Christ-centered conversation, not a quarrel.

As you listen to and learn from one another, prayerfully reflect on what modest things you can do to address our national crisis of violence. Remember the words of St. Teresa of Calcutta: “When we encounter pain and suffering in the world, our hearts are moved with compassion. We are frustrated when we cannot heal all of the wounds. We may be tempted to give up and do nothing. But everybody can do something! We must do what we can!” 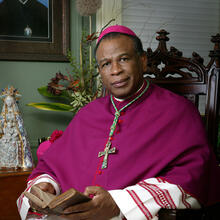 The Most Rev. Edward K. Braxton is the Bishop of Belleville, Ill., and a leading Catholic commentator on the racial divide in the United States.

No one wants to see anyone innocent killed by any means. But what is driving the deaths and the reporting of them? Why are some deaths more examined/reported than others? What are ways to reduce these gun incidents or the severity of them?

What exactly is the point in “coming together,” why is it so important, when the Pope just declared that schism is nothing to be afraid of?

I interpret Pope Francis’s words to mean that he is not going to be intimidated, that he will do God’s will no matter the threats or the forces unleashed against him. He is holy, brave and close to God.

I note this list made no mention whatsoever as to what should be done with a person who commits a murder with a firearm. I can hear the screams of anguish now when reminded of how Jesus said, "...go and sin no more." {Nooooo!! It's a judgement and surely isn't showing the current and proper level of mercy and we musn't do this as there is NO sin unless we say there is. (????)} If we take guns out of the hands of law-abiding citizens then there will rarely be violence. (!!!!). Well, there will always be violence but it will not be "mass' so all will be right in the world. And someone will have had his day in the sun. Isn't this the focus of the debate, after all?
https://www.americamagazine.org/pardon
And, once again, I am fascinated by the not so subtle level of politics entered into this piece by the author. Why doesn't the good bishop simply state, "It is a grave sin to vote for anyone other than a Democrat, to support the N.R,A,, to follow any other news sources other than those deemed acceptable by church hierarchy, to disagree with us, that membership in the wrong party is unacceptable (and we will make certain you are aware as to which party is acceptable) and, ultimately, the joy of church hierarchy being used to promote political viewpoints. Catholic Sharia Law for everyone! The bishops sure do love themselves, don't they? They don't appear to be really interested in the search for a solution to any problem but are in awe of the power which they wield.
And recall, they do desire to ban : "However, we believe that in the long run and with few exceptions (i.e., police officers, military use), handguns should be eliminated from our society. "Furthermore, the widespread use of handguns and automatic weapons in connection with drug commerce reinforces our repeated ‘call for effective and courageous action to control handguns, leading to their eventual elimination from our society.’” U.S. Catholic Bishops, New Slavery, New Freedom: A Pastoral Message on Substance Abuse (Washington, D.C.: United States Conference of Catholic Bishops, 1990), 10."
I am an independent who has never even fired a gun and am not a member of any firearms club etc., but even I can see this overreach of power by the bishops. And the logic lies in guns being banned because of drug dealing in our cities? Perhaps we should investigate the problems in our cities and our society instead. But that would entail some very difficult work so...not gonna happen.

Great encouragement for Christians to learn about effective and so hopeful ways to reduce gun violence. March for Our Lives has just proposed a Plan for a Safer America, which is practical and includes evidence based solutions https://marchforourlives.com/peace-plan/. I have just released a book for concerned citizens to understand the evidence on what stops gun and other violent crime with secrets on how to get politicians to act. http://bit.ly/2lygW58 Together these make a basis for book clubs and discussion groups.

Interesting. Hahhah. If you go to the above links you'll find 1) a call to research the problem and form yet more committees, 2) an unabashed pitch to buy a book. Not really change but, again, someone's day in the sun. (And profitable , too!)