Texas bishop in wake of church shooting: ‘No war, no violence, no guns’ 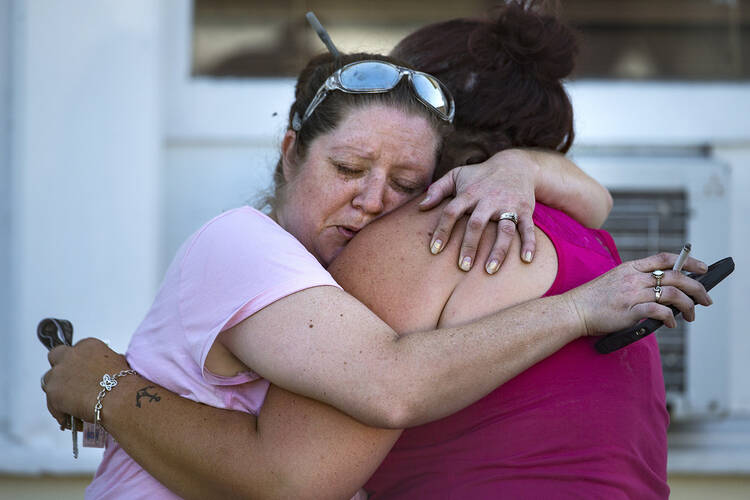 Carrie Matula embraces a woman after a fatal shooting at the First Baptist Church in Sutherland Springs, Texas, on Sunday, Nov. 5, 2017. Matula said she heard the shooting from the gas station where she works a block away. (Nick Wagner/Austin American-Statesman via AP)

Cardinal Daniel DiNardo, president of the U.S. Conference of Catholic Bishops and the archbishop of Galveston-Houston, responded to the country’s latest mass shooting, where at least 20 people were killed in a Texas church on Sunday, by saying Americans “must come to the firm determination that there is a fundamental problem in our society.”

“This incomprehensibly tragic event joins an ever-growing list of mass shootings, some of which were also at Churches while people were worshipping and at prayer,” the cardinal said in response to the shooting at the First Baptist Church in Sutherland Springs, Tex., located southeast of San Antonio.

“A Culture of Life cannot tolerate, and must prevent, senseless gun violence in all its forms.”

“A Culture of Life cannot tolerate, and must prevent, senseless gun violence in all its forms,” he continued. “May the Lord, who Himself is Peace, send us His Spirit of charity and nonviolence to nurture His peace among us all.”

Archbishop Gustavo García-Siller, who heads the Catholic Church in San Antonio, took to Twitter to express his sorrow at news of the shooting—and make known his views on guns.

He sent a series of additional tweets, including one that said, “no guns.”

We need to be embassadors of peace. No war, no violence, no guns.

The wife of the pastor of the First Baptist Church of Sutherland Springs said the couple’s 14-year-old daughter was among those killed in a mass shooting at the church.

Sherri Pomeroy, wife of Pastor Frank Pomeroy, said in a text message that she lost her daughter “and many friends” in the Sunday shooting. The text came in response to an interview request sent by The Associated Press to a phone number linked in online records to Frank Pomeroy.

“We ask the Lord for healing of those injured, His loving care of those who have died and the consolation of their families,” Cardinal DiNardo said in his statement, adding that he offers prayers for “the victims, the families, the first responders, our Baptist brothers and sisters, indeed the whole community of Sutherland Springs.”

“We stand in unity with you in this time of terrible tragedy — as you stand on holy ground, ground marred today by horrific violence,” he said.

As a very imperfect gay Catholic who received forgiveness for having sex with men years ago through the Sacrament of Reconciliation from my compassionate pastor, I oppose capital punishment, legal abortion, support stringent gun control laws, laws to protect our fragile environment, as well as reasonable government assistance to the millions of Americans in need. I also oppose war except as a last resort after diplomatic efforts have been exhausted. I believe we must defend human life from fertilization to natural death, as well as protect our environment.

Wow; if you are a member of the "he-man -hatred -of- woman club" who commits domestic violence against his wife, and kids, you will be rebranded as "suffering from mental illness" when you kill 26 people, provided you have a good Christian name like Kelly.

Perhaps the bishop should have waited 24 hours before rendering his epistle -- the Air Force failed to provide the FBI and other federal authorities information regarding the conditions under which Devon Kelly was dishonorably discharged -- he would not have been allowed to purchase the weapons with which murdered 26 of our co-religionists.