We talk a lot about negative triggers. Are there triggers for good? 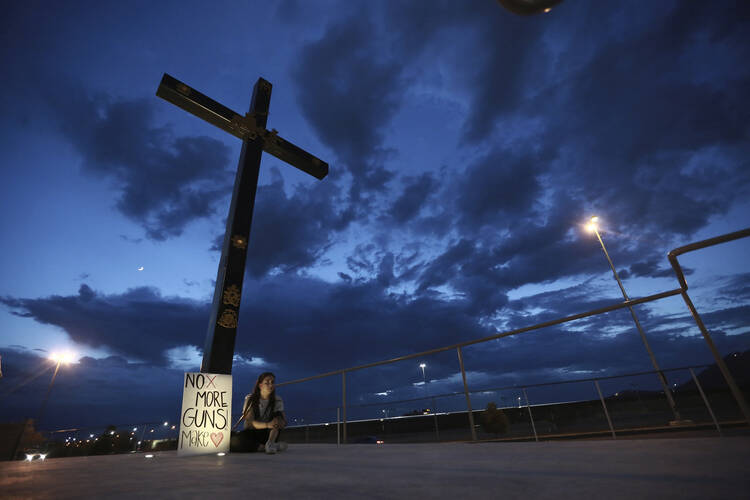 In this Saturday, Aug. 3, 2019, file photo, a woman sits next to a sign with a message that reads: ¨No More Guns! Make Love, in Juarez, Mexico. (AP Photo/Christian Chavez, File)

The real presence of triggers in American society haunts us, as we live under the persistent threat of someone, usually a young, angry white man, pulling a trigger in a public place and randomly annihilating many of us in a matter of seconds. When we debate gun control, one side places all the blame for our cultural violence solely on the owner of the finger on the trigger, and the other advocates banning weapons of war as a way to curtail American carnage.

The topic of guns often triggers intense arguments among us, making any workable solution seem a long way off. Real triggers are themselves an emotional trigger: several of my acquaintances react strongly to fireworks or other loud cracking sounds because they have survived a mass shooting or a bomb explosion. They have run from those sounds in the hope of saving their own lives. They remember passing the bodies of those who were not so lucky.

Less bloody is the figure of the metaphorical trigger. When we use expressions like having an itchy trigger finger or acting trigger-happy or being quick on the trigger we usually are not talking about actual guns. My grandmother used to say, about a thorny aunt and uncle, “He makes the bullets, but she fires them.” Those relatives were not armed with anything other than mean words, but the image was powerful.

Faced with all these negative triggers, I wonder: Are there triggers for good?

When I began working in a state prison library, I learned about triggers in the context of recovery. Inmates preparing for a hearing with the parole board often asked me for feedback on the written parole plans they were encouraged to submit. Along with demonstrated remorse for past crimes and concrete options for housing and employment on the outside, an honest discussion of individual triggers is essential to the introspection expected of an inmate going before the board.

The parole board commissioners have the solemn and somber task of determining whether a convicted felon can safely reenter society or not. If there is the smallest reason to suspect that the inmate will cause any danger or inflict any harm on others, parole is denied. Accordingly, the inmate must show deep reflection on the personal pitfalls that might trigger a relapse into the old ways of substance abuse or violence or criminal behavior. Or all of the above. Most inmates who are serious about their rehabilitation participate in 12-step programs that provide insight into their past missteps as well as tools for conquering destructive habits.

An inmate’s identified triggers might come in the form of an old neighborhood or a toxic relationship or even a seemingly innocent stop at a familiar bar. Triggers may be unavoidable, but if the person has a plan for recognizing and then defusing them, the board may find that his successful reentry into society is possible.

My own triggers are less dramatic but just as effective: For example, I am watching an episode of “Dear White People” on Netflix, and a character attending her father’s funeral has bittersweet flashbacks of her dad and herself when she was a little girl, and I am immediately a mess. My husband looks at me sympathetically, probably thinking, “Here we go, a dead dad onscreen,” and pauses the show. My dad has been dead for 10 years, but my husband knows this trigger of mine.

I think of mentors and helpers, men and women of kindness and compassion, heroes who listen to their better angels, as triggers for good.

With increasing frequency, we members of the public are given warnings in advance of the written or televised or radio or online presentations we are about to expose ourselves to that the explicit content to follow may prove disturbing. We may be triggered. College campuses are embroiled in controversy over so-called trigger warnings, prompting vociferous debate over whether college professors should coddle sensitive young adults or plunge them into grim reality for their own good. Some professors say the trigger warnings themselves create anxiety, and others remind their students that avoiding painful topics is no substitute for therapy in dealing with one’s past trauma.

We think a lot about triggers.

Faced with all these negative triggers, I wonder: Are there triggers for good?

Can a person be a trigger for good?

In the U.S. bail system, justice is for sale
Valerie Schultz

Several of the aforementioned inmates from the library were indeed granted parole. I have seen them rejoin society and start businesses, hire their fellow ex-felons, care for sick parents, reconnect with children, meet grandchildren and rekindle marriages. And I know that the stories of their success, when these tales of triumph over long odds finally meander back into the prison grapevine, give hope to those still incarcerated, who are preparing for their own board hearings. These freed men who have reclaimed themselves on the outside are triggers for good.

The moms who have braved the aforementioned gun control debate, who wear their red T-shirts and challenge their representatives and contribute their time and money and march for the safety of their children, are triggers for good. Their example prompts more of us to call our reps and donate our money and stand for reform because we see that the simple presence of every person adds to the strength of this movement.

I think of mentors and helpers, men and women of kindness and compassion, heroes who listen to their better angels, as triggers for good. In spite of our own peculiar triggers and our struggles and foibles therein, I believe each of us in our own small way can be triggers for good.

Trigger-happy. Quick on the trigger. For good. For God.

Sacraments, sacramentals, saints and holy men and women we have come to know and pray to, yes, some of our dearly departed family and friends, mentors, good teachers, a good partner, spouse. Anyone and anything that points us to our better angels is a good trigger I believe if we consciously make it so. This is faith and hope in a better life here on earth.

Thank you for your good and heart-felt reflection on this topic.