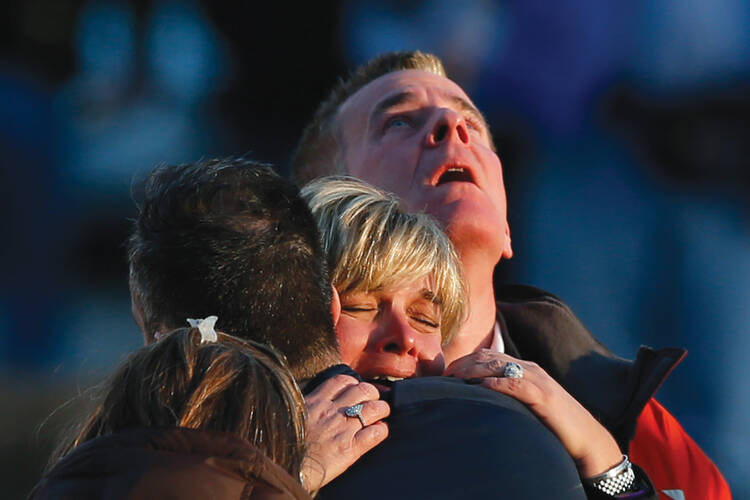 Little Olivia Engel was one of the victims of the horrific shooting at Sandy Hook Elementary School in Newtown, Conn., on Dec. 14. Msgr. Robert Weiss, pastor of St. Rose of Lima Church in Newtown, said the 6-year-old was to have been an angel in the church’s live Nativity pageant that night.

After the violence, the Nativity play was canceled and a special evening Mass celebrated instead. “Now she’s an angel up in heaven,” he said. The church remained open all night for prayer. On the weekend after the incident, which claimed 28 lives—20 children, six Sandy Hook teachers and administrators, the gunman’s mother and the shooter himself, Adam Lanza—residents were flocking to the church for the parish’s four Sunday Masses, seeking solace in the aftermath of the violence.

Cardinal Tarcisio Bertone, the Vatican’s secretary of state, sent a message on Dec. 14 to the Diocese of Bridgeport, which includes Newtown, saying Pope Benedict XVI had asked the cardinal “to convey his heartfelt grief” and his prayers to the victims, their families and “all affected by the shocking event.”

A front-page article on Dec. 15 in L’Osservatore Romano, the Vatican newspaper, said the people of the United States must look at ways to “stem the violence that strikes them from within, heinous violence that is increased by easy access to increasingly lethal weapons and this time struck children in an elementary school.

“The Newtown massacre is destined to reopen the debate about the free circulation of guns,” it said. While many individuals and groups called for more stringent gun-control measures in the immediate aftermath of the shooting, “the National Rifle Association…entrenched itself behind an embarrassing silence,” according to the Vatican newspaper.

The editorial continued, “In a pure coincidence, the massacre of the Connecticut children occurred on the eve of the anniversary of the Second Amendment to the U.S. Constitution…. It was ratified Dec. 15, 1791, and was made to measure for the United States as it was 221 years ago.”

Kathy Saile, director of the U.S. bishops’ Office of Domestic Social Development, said, “The church’s position on gun control remains the same.” The U.S. Conference of Catholic Bishops have in the past called for the control of the use and sale of firearms, supported efforts to protect the public from easy access to deadly weapons and called for sensible restrictions on the use of handguns. Citing documents issued by the bishops over decades that have urged tighter controls, Saile said, “Sadly these statements still make perfect sense today.” She added, “The church’s teaching and position on gun control are rooted firmly in a principle of Catholic moral teaching that calls us to protect and respect the inherent value and dignity of all human life.”

According to a survey by the Public Religion Research Institute released in August 2012, 62 percent of Catholics said they were in favor of stricter gun control laws in the United States. Internationally the church has long sought stronger controls on the small arms trade. In “Responsibility, Rehabilitation and Restoration: A Catholic Perspective on Crime and Criminal Justice,” released in November 2000, the U.S. bishops said, “We support measures that control the sale and use of firearms and make them safer—especially efforts that prevent their unsupervised use by children or anyone other than the owner—and we reiterate our call for sensible regulation of handguns.”