Facing the truth in San Bernardino 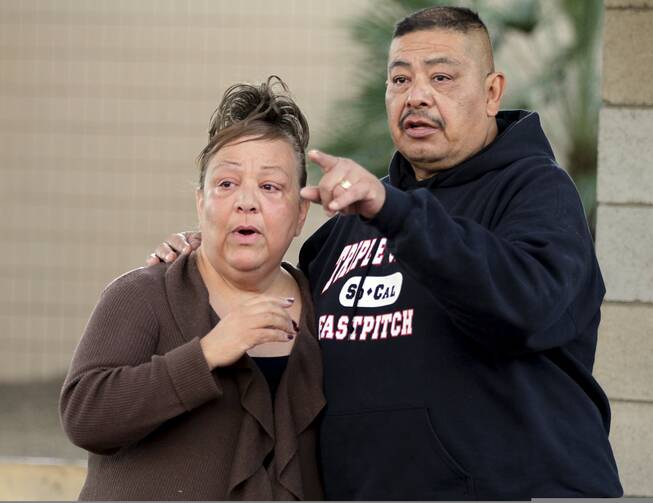 Yesterday an armed man and woman showed up at a social services center in San Bernardino that serves people with developmental disabilities. According to eyewitness reports they wore body armor and masks, and had both handguns and assault rifles.

In short order they had killed 14 people, and injured 17 more, some critically, in the deadliest shooting since the assault on Sandy Hook Elementary School in 2012.

Some have linked the crime to terrorism; others to the broader issues of crime, violence and poverty which plague San Bernardino. (According to the FBI’s violent crime statistics for 2014, San Bernardino ranks sixth in homicides among the 210 U.S. cities with populations between 100,000 and 249,999, with 20 murders per hundred thousand residents.)

Many have also pointed once again to the problem of guns in American society. According to data released by the FBI last week, more background checks for guns were run on Black Friday than ever previously recorded, a whopping 185,347. Since 1998, the FBI has processed 220 million background checks for firearms. That’s one gun for every two out of three Americans citizens.

According to Mass Shooting Tracker (as cited by The New York Times), 209 out of 336 days this year there has been a shooting somewhere in the United States in which at least four people were injured. In October the Guardian likewise noted (also using Mass Shooting Tracker) that there had been 994 mass shootings in the United States in the last 1,004 days. Just since January, almost every American state has had at least one such mass shooting, and many have had far more.

Truly, there are so many gun-related acts of violence in our country today that those who continue to insist that moves like background checks, bans on assault weapons or on high capacity magazines are unnecessary look more and more like climate change deniers. There is simply too much evidence to the contrary. An entire opera of canaries have flown into the coal mine. None have come back. Immediate change is needed.

In the meantime, as George Zornick at the Nation noted yesterday on Twitter, while some politicians call for action, the tendency among most in the face of these tragedies is to tweet offers of prayers. Notably, all of the “good” politicians, by his comparison, are Democrats and the “bad,” Republicans. Mr. Zornick may have a legitimate point (I suspect he does), but it sure didn’t seem like either party has made any difference whatsoever in getting change of any kind done.

The Atlantic, considering Mr. Zornick’s tweet, followed up with analysis of what it called “prayer shaming”—that is, people calling out other people for just tweeting prayers. And while I am not for any kind of shaming, I think there is something to be said for demanding far more from people, including politicians, than a sympathetic tweet.

Honestly, no one in San Bernardino right now gives a damn that Bernie Sanders thinks what happened is sickening, or who Ted Cruz’s prayers are with. California has some of the toughest gun laws of anywhere in the country, and still it faces days like these. Our level of regulation is simply inadequate. Background checks—the battle the N.R.A. wants people to concentrate on—are important, but to some degree peripheral to the larger issues of the sheer volume and penetration of firearms in American society today.

We should all pray for the victims, and also for our country, if only because it seems like God alone has the potential to make any kind of difference on this issue today. But prayer is not enough. Action is needed. We should demand it from those in our state and federal governments. And we should find ways of being a part of that action ourselves. As San Bernardino Bishop Gerald Barnes wrote yesterday, “Let us come together now in unity to bring light to the darkness of this day.”

Jim McDermott
@PopCulturPriest
Show Comments (
1
)
Comments are automatically closed two weeks after an article's initial publication. See our comments policy for more.
Tim O'Leary
6 years 1 month ago
How did a terrorist attack by Radical Islamic Jihadis in California turn into a discussion on gun control, from the President on down? I didn't see the same thing happen in Paris, France, where there was no clamor for more gun control. And I note no call for knife or bomb control, even though both weapons were part of the attacks. My only explanation is that the political narrative of terrorists getting through the immigration process and the obvious failure to contain ISIS is so politically inconvenient that someone wants to change the subject. It would be like blaming an obscure youtube video for a terrorist assault on the other side of the world. oh wait. That happened as well.