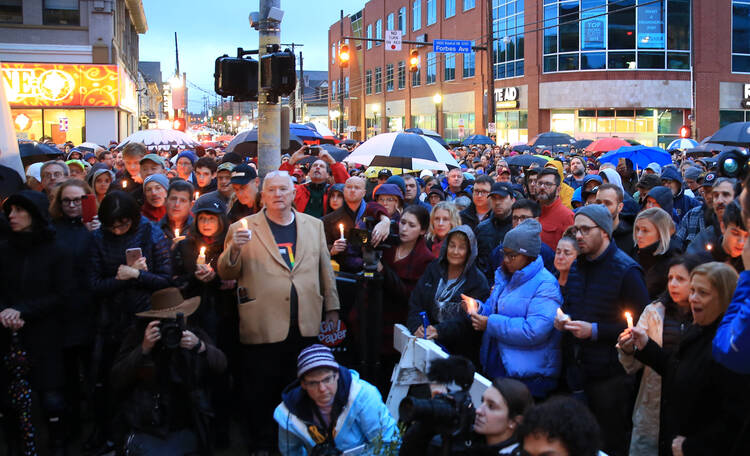 People mourn the loss of life as they hold a vigil for the victims of the Tree of Life Synagogue shooting in Pittsburgh on Oct. 27. Pope Francis at his Sunday Angelus prayed for those affected by the attack inside the synagogue. (CNS photo/John Altdorfer, Reuters)

Pope Francis denounced the “inhuman” and “terrible attack” on a synagogue in Pittsburgh yesterday, expressed his “closeness” to the Jewish community and the people of that city, and prayed for all the victims and their relatives.

“May the Most High receive the dead in his peace, comfort their families and sustain the wounded,” he prayed as he addressed thousands of pilgrims from many countries gathered in St. Peter’s Square on Sunday, Oct. 28.

“We are all, in reality, wounded by this inhuman act of violence,” he said. He was referring to the attack that took place on Saturday, Oct.27, when Robert D. Bowers, 46, armed with an assault rifle and handguns started shooting indiscriminately inside the Tree of Life Congregation synagogue. According to several news sources, Mr. Bowers was shouting “All Jews must die” and anti-Semitic slurs. The attack left at least 11 adults dead, and wounded several others including four police officers. The police have arrested Bowers.

It was one of the deadliest attacks against the Jewish community in this country, and took place amidst a climate of hate-speech and violence, as the nation moves towards crucial midterm elections.

May the Lord help us to quench these hotbeds of hate that are developing in our societies.

Pope Francis today alluded to that climate of hate and violence that is developing on both sides of the Atlantic when he prayed, “may the Lord help us to quench these hotbeds of hate that are developing in our societies, by reinforcing the sense of humanity, the respect for life, moral and civil values, and the holy fear of God, who is Love and the Father of all.”

Speaking at the launch of the book Sharing the Wisdom of Time in Rome last week, the pope recalled the rise of populism in Europe in the 1920s and its consequences, and went on to warn people against the emergence of hate in today’s world as a result of the emergence of new populisms. His words are particularly relevant in the light of the political climate in the United States and Europe today.

It's not being called a terrorist attack; it did not happen in Europe, and the he is not a Muslim. Had either been true the tv crawls would have all been screaming "terrorist attack against Jews"! Trump has condemned anti Semitism, against Jews, while he promotes it against that other Semitic group. The media does not denounce his virulent anti Semitism against the other Semitic group. They promote it too; as when he says the caravan must be stopped for among other reasons ,it includes those other Semites. The media, including the progressive liberal media and liberal pundits fault him for lying; correcting his lie but not calling out his bigotry.;a caravan must be stopped if it includes, along with good Hondurans , those[evil] Semites.Van Jones on CNN courageously called out not just Trump; easy pickens for the media, but the media itself for this blatant promotion of anti Semitic bigotry against that other Semitic group. God bless you van Jones.Tom Freeman promoted it while denouncing anti Semitism against Jews. Zakaria noted it but moved on. This American terrorist hated both ; the Jews and the Semitic refugees they were assisting, [till Trump with the approval of the Supreme Court stopped those Semites from finding safe refuge in the US].Thank you Pope Francis for always getting it and speaking out!

Incoherent. Who is this "other Semitic group" to which you refer?

The current worldwide understanding of the word "antisemitic" is that it describes an attitude of dislike up to murderous hatred of 'people who are Jews', 'people who practice Judaism' and 'such people who constitute the modern nation state called Israel'.

Maybe you are referring to Muslims.
Muslims are people of any ethnicity who identify or practice the religion of Islam.

Antisemitism is based solely on the idea that those persons are to be hated by reason of who they are and the newly invented propagandistic word islamophobia is a suspiciousness, wariness or fear of such people by reason of the danger they pose from what they have done in the far and recent pase, what they believe is their duty to do and what they might do according to their beliefs. A whole world of difference.
From where I sit, US so-called Democrats are the ones who believe in and practice identity politics. Very unchristian!

I'm not talking about the world wide understanding of the meaning of anti Semite. I am aware of its historical meaning.I am expanding the meaning because the situation demands it needs expanding to address it's latest permutation; distrust, wariness , fear, hatred, against another Semitic religion and its Semitic Middle Eastern adherents. It needs expanding because it has new targets., the ones Trump has said must be kept out along with other evil people like m13 , drug smuggler, terrorists, etc.. Anti Semites, like all bigots and racists always believe they are justified in their bigotry. Same psychological dynamics that exist today against Semitic Islam and Semitic middle easterners, exist for people who hate Judaism and and Jews;it's not my fault they are Jews, it's not my fault they are Muslims, if they would just stop being Jews, if they would just stop being Muslims, we would not be against them. Anti Semites always believe that their targets are existentially evil. Anti Semitism will always be with us, I guess. It changes form but is just as rabid and pernicious in the 21st century as it was in the past. You are an entrenched in it.

Jesus was a Semitic Jew , crucified by anti Semitic Romans; His solidarity is always with victims of antisemitism. Today that would include the people Trump[Rome?] has said are in the caravan along with the good Hondurans!.

There is a lot of anti Jewish/anti Israel sentiment across the US. It is not as virulent as in Europe. I'm not sure it has anything to do with populism. Whatever that is. Populism is just an election by the people. is usually contrasted with rule by the elites. I'm not sure the Pope should be going there.

Anti Semitism [against Jews] is not the same as opposition to Israeli policies today. One can even say that the creation of the state of Israel was not morally justified and resistance to her creation was, at the time justified. Though to be opposed to her very existence today WOULD be anti Semitic. Anti Semitism and opposition to Israeli policies, can overlap, but it is intellectually dishonest and propagandistic to claim they are inherently one and the same. It's an anti Semitic trope[ against Semitic Arab/Palestinians].

This anti Semitic trope against Palestinian / Arabs is, unfortunately, insidious in the US. Has been since the 67day war , I think. It is not so virulent in Europe. Hence your other trope, Cosgrave; that Europe ;unlike the US, having always had a vibrant pro Palestinian/Arab side in that political conflict with Israel, are therefore, when siding with the Palestinians, really just expressing historical hatred of Jews. But Thanks to the college campuses today filled with millennials, who are not accepting any narrative handed down to them, there is now push back against this propaganda.

Antisemitism (also spelled anti-Semitism or anti-semitism) is hostility to, prejudice, or discrimination against Jews

From Wikipedia. While technically there are other Semitic people besides Jews, the term anti-Semite refers to prejudice against Jews.

Antisemitism has increased significantly in Europe since 2000, with significant increases in verbal attacks against Jews and vandalism such as graffiti, fire bombings of Jewish schools, desecration of synagogues and cemeteries

One can even say that the creation of the state of Israel was not morally justified and resistance to her creation was, at the time justified.

A discussion of the current Israel/Palestinian situation would take several books. Once the Jewish state was agreed to and established, its existence was defensible by the Jews. How that played out over the last 70 years is not easily described. Are anti Israel attitudes just disguises for other underlying attitudes? You have your opinion obviously. I don't agree with them. I will leave it at that.

This massacre was a manifestation of anti Semitism against Jews, and against all Semites and Semitic Islam . The person choose this synagogue because he hated Jews AND because he knew this synagogue had or was affiliated with a Jewish NGO that had welcomed Semitic Middle Eastern, and African Muslim? war refugees, prior to the ban against them. The media and politicians should not erase this history and claim that his stated opposition to immigrants means he he was objecting to a caravan of Central Americans coming in while omitting from the narrative his anti Islam /Muslim bigotry. His ire against Jews; acted out horrifically against this congregation, escalated when he learned the agency opened their doors to assist Semitic Middle Eastern Muslims. He is a double anti Semite! One is unacceptable in todays USA while the other is quite promoted . By our laws, by a lot of our media and by many politicians. And by "good Christian folk" like on the Catholic blogs even!

In the Gospel on October 28, Bartimaeus pleads with Jesus to "have pity on me" and let him see ( Mark 16: 46-52). In his commentary on this Gospel, Bishop Robert Barron observes that Jesus not only heals people of their infirmities, but also heals us from sin and death. Let's hope that those blinded by bigotry and hatred against Jews as Robert Bowers is as well as all blinded by hatred of anyone will be healed by Jesus.