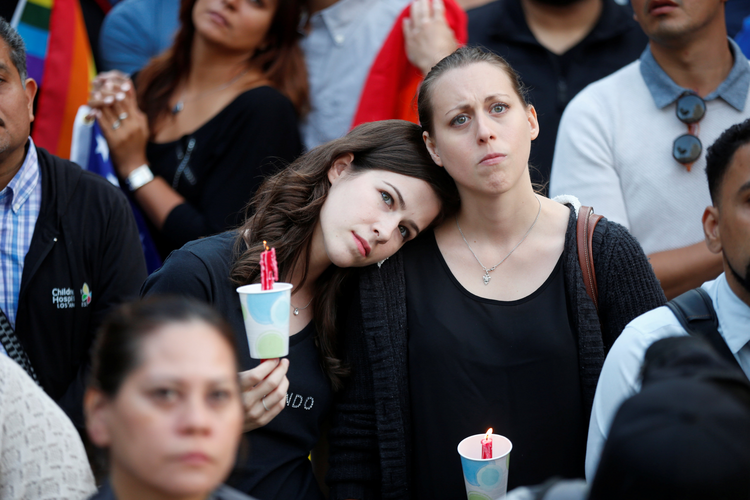 Bishops of dioceses which themselves fell victim to mass shootings in recent years were among the flood of Catholic leaders offering condolences and consolation to survivors and family members of the victims of the mass shooting on June 12 at a gay nightclub attack in Orlando, Florida.

The mass shooting left 50 people dead, including the gunman, and more than 50 others wounded.

Bishop Gerald R. Barnes of San Bernardino, a city that suffered a mass shooting itself last year, released a statement: "For those of us in San Bernardino, this is especially painful because we also experienced the trauma of an act of public violence in our community not so long ago, at the Inland Regional Center.

"In that sense, we offer our prayers and our tears in solidarity with the victims of this attack, their loved ones, the Diocese of Orlando and the city itself," said the statement. "Because of the circumstances of this attack, we also make clear our condemnation of discriminatory violence against those who are gay and lesbian, and we offer our prayers to that community."

Bishop Frank J. Caggiano of Bridgeport, Connecticut, which takes in Newtown, where four years ago 20 children and six adults were slain at Sandy Hook Elementary School before the gunman took his own life, said in a June 14 statement that all Catholic must raise their voices against hatred.

The attack in Orlando, he said, "has unmasked once again the evil face of hatred and bigotry in our society. It is an evil that must spur us to rededicate ourselves to fostering a true spirit of unity and reconciliation."

"How do we respond before such hate? At minimum, all Catholics must raise our voices against such hatred," Bishop Caggiano said. "There can be no place in our midst for hatred and bigotry against our brothers and sisters who experience same sex attraction or for anyone who is marginalized by the larger society. The Lord Jesus extended his arms on the cross to embrace all people who respond to His offer of salvation.

"Who are we to close our hearts to anyone for whom the Lord has offered an invitation to experience his saving life? As a society and a church, we must do whatever we can to fight all hatred, bigotry and intolerance in all its forms."

"Yet another lament about the prevalence of guns throughout our society seems a pale response to the horror of the crimes in Orlando," said Cardinal Sean P. O'Malley of Boston in a June 13 statement.

"With each repeated occurrence of mass shootings in schools, theaters, churches and social settings it appears increasingly clear that any hope for thwarting these tragedies must begin with more effective legislation and enforcement of who has access to guns and under what conditions. However, legislation alone will not be sufficient as there are wider and deeper forces at work in these attacks."

"Our gun laws are an invitation to kill. They would be ludicrous if the situation were not so tragic. 'By their fruits you know them,'" Bishop Farrell said, quoting the Gospel of Matthew, "and the fruits of our gun control laws are bitter indeed—no, they are fatal."

He added, "The Second Amendment rightly protects our right to bear arms for hunting, sport, self-defense and other legitimate purposes. There is no legitimate purpose for making this kind of weapon available to the general public.

"It shouldn't take 49 of our children being mercilessly shot to death for us to recognize our shared humanity, regardless of our lifestyle or paradigm of marriage and human sexuality," said a June 16 statement by Bishop Felipe J. Estevez of St. Augustine, Florida, north of Orlando.

"When the victims of the Pulse shooting were made public, the world learned that they were predominately young and Latino," he said. "This should sound familiar to the Catholic Church. We are young and Latino and we cannot fail to be attentive to people, whether they are found in our pews, our neighborhoods or gays and lesbians in our families."

"We stand in solidarity with all those affected by this atrocity, for regardless of race, religion or personal lifestyle, we are all beloved children of God, called to respond to the mystery of iniquity with love and compassion," said a June 13 statement by Archbishop Salvatore J. Cordileone of San Francisco.

In his June 16 column in The Evangelist, newspaper of the Diocese of Albany, New York, Bishop Edward B. Scharfenberger of Albany said that the objective of the gunman at the nightclub "seemed clear enough: to put a violent end to defenseless members of a class of human beings simply because they existed and he did not want them to live."

"We must state unequivocally that our respect for the dignity of all human beings includes those who themselves identify or are associated in the judgment of others as members of the LGBTQ community," he wrote.

"There have always been and will be powers in this world whose design is to divide us as a nation by actions provoking us to respond in kind with hatred and violence," the bishop wrote. "One thing that can unite us is our trust in God's patience with us sinners, along with our uncompromised conviction as Americans -- whatever our religious faith -- that every human being is a being of moral worth, from conception to natural death. And this is so without regard to any class or status assigned us by human custom or judgment, or by personal or institutional convenience. ... To devalue one human life is to devalue all human lives. United in the defense of human life we must stand."

The Sisters of St. Joseph based in the Philadelphia suburb of Chestnut Hill, Pennsylvania, posted a statement June 13 on Facebook which said, in part, "In a special way, our prayers are with the LGBT community, their families, and friends, as they mourn the loss of their loved ones. ... Together, with all people of goodwill, let us work to eliminate gun violence and to eradicate every form of discrimination, that they peace for which Jesus lived and died may be realized on this earth."

The mass shooting in Orlando and other such "tragic moments serve add to a culture of fear in our nation that makes us suspicious of anyone we define as 'other,'" said a June 17 statement from the provincials of the Franciscan Friars of the U.S.

"We, of course, join our voices to the chorus of those offering thoughts and prayers for the victims in Orlando. We stand shoulder-to-shoulder with our LGBT brothers and sisters as they grieve and try to make sense of this tragedy. To them we say clearly: We stand with you," the statement said.

The provincials also urged universal background checks and other common sense reforms to help reduce "the violence of a gun culture run amok in the U.S. It is time that we stand up as a people and say enough is enough."

Prayer services took place around the country in cities large and small to remember the Orlando victims.

A prayer service in the Skaggs Catholic Center grotto in Draper, Utah, drew more than 100 people June 13, less than 24 hours after the calamity. They prayed a decade of the rosary in memory of the victims of the Pulse shooting. They also prayed for the victims' families. The prayer service was organized by officials of Juan Diego Catholic High School, one of three schools in the Skaggs Catholic Center.

William Flanagan, a Juan Diego senior who was among those who led a decade of the rosary during the prayer vigil, said the shootings saddened him, and that he hoped the vigil "helps get all those innocent souls into heaven and with that said, I hope it helps the families, too."

"A good response to a tragedy like this is prayer," Galey Colosimo, Juan Diego Catholic High School's principal, told those gathered in the grotto. "Whether you're Catholic or not, it doesn't matter. I think we're all here in solidarity together tonight. Just pray for so many things: the victims and their families, certainly, and for our country, and for our world."

Contributing to this roundup was Marie Mischel in Draper.