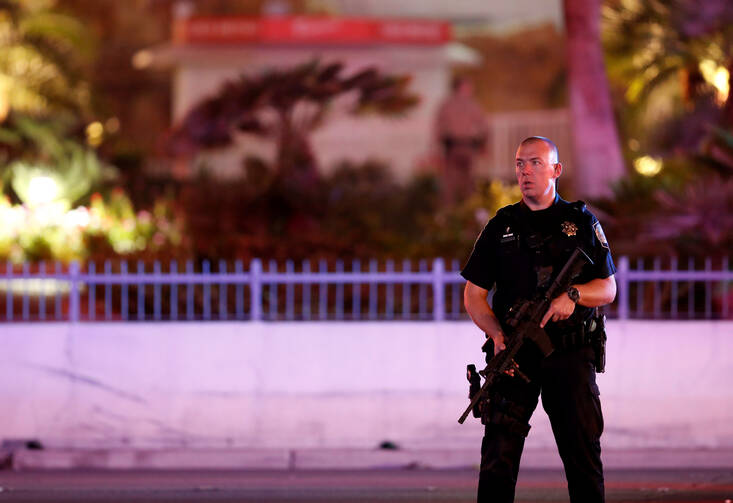 A police officer stands in front of the Tropicana hotel-casino in Las Vegas Oct. 2 after a mass shooting at a music festival. A gunman perched on the 32nd floor of a hotel unleashed a shower of bullets late Oct. 1 on an outdoor country music festival below, killing more than 50 people and wounding hundreds, making it the worst mass shooting in modern U.S. history (CNS photo/Steve Marcus, Las Vegas Suns).

Pope Francis was “saddened to learn of the shooting in Las Vegas” and “sends the assurance of his spiritual closeness to all those affected by this senseless tragedy.”

This was the message sent on the pope’s behalf by the Cardinal Secretary of State, Pietro Parolin, to the bishop of Las Vegas, Joseph Anthony Pepe, hours after the shooting at the Route 91 Harvest Festival earlier today in which at least 50 people were killed and some 200 injured by a lone gunman.

He said the pope “commends the efforts of the police and emergency service personnel” and “offers the promise of his prayers for the injured and for all who have died, entrusting them to the merciful love of Almighty God.”

The attack was the deadliest mass shooting in modern U.S. history. More than 400 victims were taken to the hospital, authorities said. SWAT officers using explosives stormed the gunman's hotel room and found he had killed himself, authorities said.

The gunman was identified as Stephen Craig Paddock, 64, of Mesquite, Nevada.

There was no immediate word on the motive for the attack. The U.S. Homeland Security Department said there was no "specific credible threat" involving other public venues in the U.S.

The country music star Jason Aldean was performing Sunday night at the end of the three-day Route 91 Harvest Festival in front of a crowd of 22,000 when the gunman opened fire from inside the Mandalay Bay Hotel and Casino.

As the bullets ran rampant, thousands in the crowd fled in every direction. Couples held hands running through the dirt lot. Faces were brushed with shock and confusion, tears and screams.

Police shut down the usually busy Las Vegas Boulevard and authorities across the state and federal ranks converged on the scene as dozens of ambulances ferried those struck by gunfire.

Nearby Interstate 15 and flights at McCarran International Airport were briefly closed. Hospital emergency rooms were jammed with victims delivered by ambulance. Others loaded the wounded into their cars and drove them to hospitals.

President Donald Trump tweeted: "My warmest condolences and sympathies to the victims and families of the terrible Las Vegas shooting. God bless you!"

Before Sunday, the deadliest mass shooting in modern U.S. history took place in June 2016, when a gunman opened fire at a gay nightclub in Orlando, Florida, killing 49 people

Sunday's shooting came more than four months after a suicide bombing at an Ariana Grande concert in Manchester, England, that killed 22 people.

This story includes updates from the Associated Press.

Until we immediately research in greater depth the root causes behind all mass acts of murder, and mindless murder in general, the situation will not change. We appear to believe that rage and mental illness can be eliminated by legislative actions; they cannot. What drove this individual to murder-suicide is as unclear as what drove the Germanwings co-pilot to such an act. Depression may lead to suicide, but murder?Leaders, please focus on the causes or it will happen again in a manner for which we are unprepared. Again, we all cry, WHY!!

I'm a gun owner but the bump kit this man used should be totally outlawed. It circumvents the 1986 law that prohibits machine guns by turning a semi automatic into effectively an automatic ...ie a machine gun. Without that kit, perhaps two dozen lives could have been saved....and hundreds of injuries. And this massacre has just taught ISIS that a high altitude shooter with a bump kit can kill many. Go to youtube and type in "bump kit for semiautomatic". You'll see how the carnage was multiplied by one man.

Here is a $99 bump stock in this video....go 2/3 rds into the video past his talking to see what this man in Las Vegas used legally. It needs to be banned.
https://youtu.be/3gWrthH2OK4

What changed? The top federal income tax rate fell to 50 percent and inequality grew on steroids. The number of U.S. billionaires quadrupled during the Reagan presidency. Four of the fifteen mass killings occur (1982 – 1986).

Mass killings perhaps align with the inequality impact found in other studies done by the Equality Trust.