Explainer: What the church has done to fight clergy sex abuse since 2018’s ‘summer of shame’ 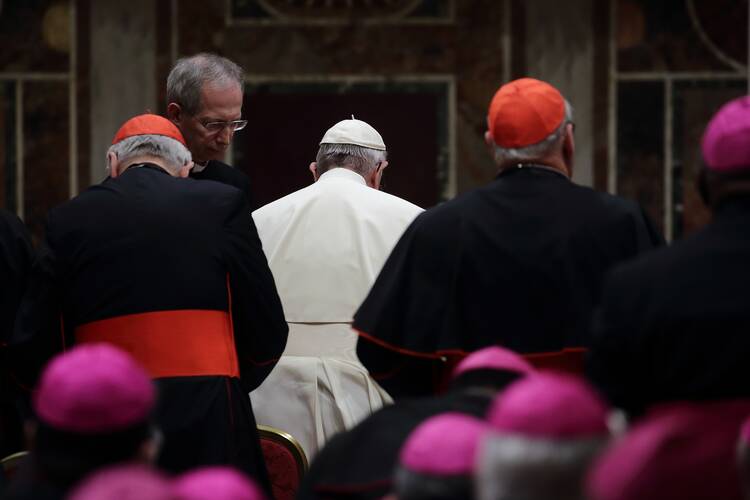 Pope Francis and prelates from around the world attend a penitential liturgy during a meeting on the protection of minors in the church at the Vatican in this Feb. 23, 2019, file photo. (CNS photo/Evandro Inetti, pool)

It has been two years since the Pennsylvania Grand Jury Report was published on Aug. 14, 2018, documenting in at times disturbing detail at least 1,000 cases of abuse by 300 predator priests spanning seven decades. Within two months, 13 more states and the District of Columbia had launched similar investigations, and Pope Francis had accepted the resignation of Cardinal Donald Wuerl, then-archbishop of Washington, who was named in the report as failing to deal adequately with abuse when he was bishop of Pittsburgh.

The Pennsylvania report came in the middle of what became known as the Catholic Church’s “summer of shame,” which began with the surfacing of accusations of abuse of minors by the now-laicized former Cardinal Theodore McCarrick and ended with the release of Archbishop Carlo Maria Vigano’s bombshell letter accusing church leaders, including Pope Francis, of knowing about Mr. McCarrick’s actions and failing to take action.

Two years later, the church has taken actions on local and global levels toward greater transparency regarding abuse accusations and investigations, closed loopholes that had allowed bishops who covered up abuse not to face consequences and created universal guidelines for abuse reporting systems to be established in every diocese in the world.

The Pennsylvania report came in the middle of what became known as the Catholic Church’s “summer of shame.”

According to a ProPublica database, 178 dioceses and religious orders in the United States have now released lists of clergy members who have been credibly accused of sexually abusing minors. The lists name 6,754 alleged abusers in total.

[Related: If a priest is ‘credibly accused’ of sexual abuse, what does that mean? Depends whom you ask.]

In September 2018, just after the so-called “summer of shame,” the Vatican announced it would host a historic summit of church leaders on the protection of minors. The next month, Pope Francis ordered ordered a Vatican investigation into former Cardinal McCarrick, who had become the first bishop to resign from the College of Cardinals over sexual abuse that July.

The McCarrick report is expected to address who in church leadership knew about Mr. McCarrick’s predatory actions and whether he was promoted or recommended for promotions by those who knew. Cardinal Pietro Parolin told Reuters last February that the report had been finished, but it still has not been published, prompting an editorial from the National Catholic Reporter this week that it is “past time” for the Vatican to release its findings.

The McCarrick report is expected to address who in church leadership knew about Mr. McCarrick’s predatory actions.

On the eve of the Vatican’s summit on sexual abuse last year, Pope Francis removed Mr. McCarrick from the priesthood.

At the Vatican summit, held over the course of four days, the heads of the world’s bishops’ conferences and religious orders listened to speeches from survivors and experts on sexual abuse and discussed what they heard in small groups. Pope Francis described the meeting as a “catechesis,” meant not to systematically solve problems but to get church leaders on the same page about the severity of the abuse crisis worldwide and highlight their role in responding to it.

Though few new policies were adopted during the summit, the Vatican has followed up with a number of actions that were first mentioned there. For example, one month after the summit, Pope Francis adopted a set of laws and norms that made all Vatican City officials and ambassadors mandated abuse reporters and set up a victim assistance operation in the Vatican’s health and wellness department.

In May 2019, Pope Francis issued the decree “Vos estis lux mundi,” or “You are the light of the world,” which required every diocese to set up reporting systems for sexual abuse, mandated that the Vatican be updated every month on an investigation and that investigations be completed within three months of a report, and set up a system for bishops who are regional leaders to investigate any bishop in their region who is accused of abuse or cover-up. To date, only two U.S. bishops have been investigated under the new system: Bishops Nicholas DiMarzio of Brooklyn and Michael Hoeppner of Crookston, Minn.

At the Vatican summit, the heads of the world’s bishops’ conferences and religious orders listened to speeches from survivors and experts on sexual abuse.

In December 2019, Pope Francis removed the “pontifical secret” designation from Vatican abuse trials. This meant that information about a trial or investigation would now be available to state authorities and to survivors, who had often been left in the dark about what was going on with their trial.

[Podcast: Now that the ‘pontifical secret’ is abolished for abuse cases, what info will be public?]

In July 2020, the Vatican released its long-awaited “vademecum” or handbook on on how bishops and superiors of religious orders should handle the sexual abuse of minors by clergy. The handbook is the first place where all of the Vatican’s guidelines for handling abuse, from reporting to investigating and taking juridical action, have been put together in one step-by-step format. While it is mostly a compilation of existing guidelines, it does state for the first time that bishops and religious superiors should report abuse to the civil authorities even in places where that is not required by law. Previously, church leaders were only required to report abuse when the state had mandatory reporting laws.

In the United States, in addition to many dioceses releasing lists of those credibly accused of abusing minors, some have also established victim compensation funds. State legislatures including New York, New Jersey and California have also opened “lookback windows,” allowing lawsuits to be filed for abuse that occurred outside the statute of limitations. Accordingly, the number of abuse reports doubled between the U.S. bishops’ 2017 report and 2018 and tripled between 2018 and last year. The vast majority of lawsuits filed were brought forward by men in their 40s, 50s and 60s alleging decades-old abuse, according to the Associated Press. Of the 4,434 cases in the 2019 report, only 37 were brought by minors.

The wave of new lawsuits and compensation fund payments has led some dioceses to file for or seek protection from bankruptcy. Since the release of the Pennsylvania Grand Jury report, six dioceses in the United States and Guam—including the archdioceses of Santa Fe, N.M., Agana, Guam, and New Orleans, La.—have filed for bankruptcy.

1
The only Trappist brewery in the U.S. is closing (and IPAs are to blame)
John W. Miller
2
An unlikely role model for a more human abortion debate
Matt Malone, S.J.
3
Archbishop Cordileone on barring Nancy Pelosi from Communion: ‘I cannot in my conscience allow the situation to continue.’
The Gloria Purvis Podcast
4
Interview: U.S.-Vatican Ambassador Joe Donnelly on Ukraine, China and his meeting with Pope Francis
Gerard O’Connell
5
Pope Francis: ‘I have never denied Communion to anyone.’
Gerard O’Connell