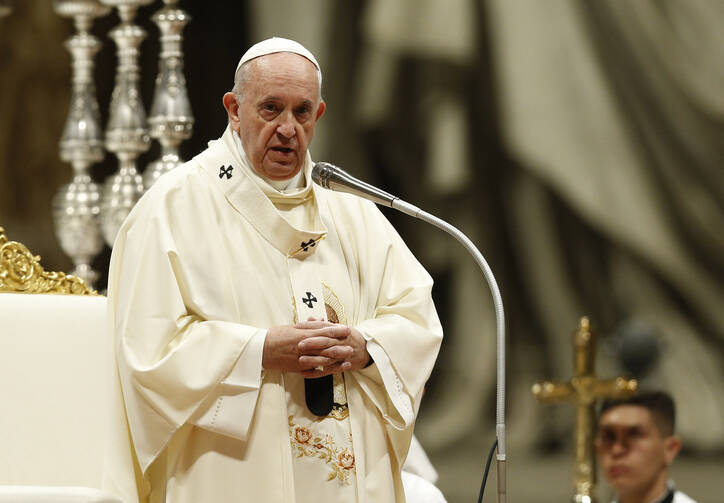 Pope Francis gives the homily marking the feast of Our Lady of Guadalupe in St. Peter's Basilica at the Vatican on Dec. 12. (CNS photo/Paul Haring)

In a decision of enormous importance, long called for by survivors of abuse and their advocates, Pope Francis has abolished the pontifical secret for sexual misconduct cases concerning clerics.

The “pontifical secret” is not related to the seal of the confessional, which remains absolute (and inviolable) in Catholic teaching and practice. Rather, the pontifical secret refers to confidentiality in the church’s judicial handling of clerical sex abuse and other grave crimes (as well as secrecy in other areas, such as some matters concerning the appointment of cardinals and bishops). The secrecy ensures that cases are dealt with in strict confidentiality. Vatican experts have said it was designed to protect the dignity of everyone involved, including the victim, the accused, their families and their communities.

Sources in Rome (who requested anonymity) told America that Pope Francis had to overcome strong internal opposition in the Vatican before issuing this important piece of legislation.

In September 2017, members of the Pontifical Commission for the Protection of Minors had asked Pope Francis to reconsider Vatican norms maintaining the imposition of the “pontifical secret” in the church’s judicial handling of such crimes. He has done so by promulgating a new law that Archbishop Charles Scicluna, adjunct-secretary of the Congregation for the Doctrine of the Faith, told America represents “a momentous shift towards transparency” in the Catholic Church’s ongoing response to the abuse scandal.

This was one of two new laws published by the Vatican on Dec. 17 at the instruction of Pope Francis, who celebrates his 83rd birthday on this day. The second law updates the definition of child pornography to cover victims up to age 18. Significantly, too, it allows for qualified laypeople to represent and defend persons in church tribunals in cases of sexual misconduct without having to ask permission. Previously only clerics could do so.

The Vatican referred to the two new laws as “rescriptum ex audientia,” the technical term in Latin which, Archbishop Scicluna explained, “is a decision that the Holy Father takes in an audience with one of his main collaborators, a decision that becomes a law.”

The new law regarding the pontifical secret bears the title “Instruction on the confidentiality of legal proceedings.” Sources in Rome (who requested anonymity) told America that Pope Francis had to overcome strong internal opposition in the Vatican before issuing this important piece of legislation.

Archbishop Scicluna said the new law is “one of the main fruits” of last February’s summit meeting of the presidents of episcopal conferences in the Vatican on “the protection of minors.” He recalled that the third day of that event “was dedicated to transparency, and a number of speakers called for the abolition of the pontifical secret for these crimes, for these delicts.”

Archbishop Scicluna said the new law is “one of the main fruits” of last February’s summit meeting of the presidents of episcopal conferences in the Vatican on “the protection of minors.”

He explained that because of the motu proprio “Vos Estis Lux Mundi” (VELM) issued by Pope Francis on May 7 (which established new procedural norms to combat sexual abuse and to ensure that bishops and religious superiors are held accountable for their actions), “you cannot simply put all the cases under the heading of ‘sexual abuse of minors cases,’ but rather under the generic term ‘sexual misconduct cases,’ because under VELM the cases include sexual misconduct against ‘the vulnerable,’ not just cases of minors that were and still are reserved to the CDF; they also include rape, not just of minors but also adults.” He explained that “cases of sexual abuse of minors by clergy remain under the jurisdiction of the CDF. All other misconduct cases referred to in VELM remain under the jurisdiction of the local Ordinaries, except when cases involve persons in leadership positions (bishops and superior generals).”

The Vatican said the new law comes into force immediately. It is articulated in five points, the first of which states that “the pontifical secret does not apply to accusations, trials and decisions involving the offences referred to” in two articles of two distinct but related Motu Proprio.

The first is Article 1 of the motu proprio “Vos Estis Lux Mundi”and refers to offenses committed by clerics or members of Institutes of Consecrated Life or Societies of Apostolic Life listed in VELM, regarding:

a) Delicts against the sixth commandment of the Decalogue consisting of: (i) forcing someone, by violence or threat or through abuse of authority, to perform or submit to sexual acts; (ii) performing sexual acts with a minor or a vulnerable person; (iii) the production, exhibition, possession or distribution, including by electronic means, of child pornography, as well as by the recruitment of or inducement of a minor or a vulnerable person to participate in pornographic exhibitions;

VELM specifies that in these norms the term “minor” means “any person under the age of eighteen, or who is considered by law to be the equivalent of a minor,” while the term “vulnerable person” means “any person in a state of infirmity, physical or mental deficiency, or deprivation of personal liberty which, in fact, even occasionally, limits their ability to understand or to want or otherwise resist the offence.” It also states that the term “child pornography” means “any representation of a minor, regardless of the means used, involved in explicit sexual activities, whether real or simulated, and any representation of sexual organs of minors for primarily sexual purposes.”

Referring to this article, the new law states that “the pontifical secret does not apply to accusations, trials and decisions involving the offenses” committed by clerics referred to in Article 6, namely the sexual abuse of minors by clerics as well as the acquisition, possession or dissemination of pornographic images of minors.

“It means that local dioceses and religious congregations have the right and the duty to share information with victims and with the civil authority.”

Archbishop Scicluna explained that according to this new law, “cases of misconduct that come under VELM and also the special laws applicable for the CDF are not subject to the pontifical secret.” This as “a very important decision,” he said; “it means that nobody can actually say I cannot share this information with you, and especially with people who have a right to information, because of the pontifical secret.” However, “it doesn’t mean that these cases now are public domain, but it means that local dioceses and religious congregations have the right and the duty to share information with victims and with the civil authority as the pontifical secret cannot be invoked to impede or hinder that.”

He underlined the fact that “the law itself states that even the confidentiality of these cases should not be an impediment to the exercise of the duty under state laws or domestic laws, especially the duties to report or disclose crime and even to answer and collaborate with the demands of judges dealing with individual cases.”

The Maltese archbishop, who was for many years Promoter of Justice at the CDF under Saint John Paul II and Benedict XVI, highlighted another aspect of the new law: it makes clear that “anybody who discloses misconduct or a crime and anybody who is impacted by the misconduct or the crime, and the witnesses, should never be subject to a vow or a promise of silence on the fact that they have reported.”

Consequently, he said, “the new legislation is not only about the pontifical secret, it’s also stating for the first time in church law that there is a moral duty, in line with VELM, to collaborate with the civil authorities. And, moreover, there is an obligation not to bind people who disclose misconduct or crimes by any promise or vow of silence.”

The second law published by the Vatican today was issued by Pope Francis on Dec. 3 and comes into force on Jan. 1, 2020. Archbishop Scicluna said it aligns the law of “Sacramentorum Sanctitatis Tuela,” with that of “Vos Estis Lux Mundi” (VELM).

He said the new legislation “is actually a momentous shift towards transparency and “both VELM and the new law state that “confidentiality is there to guarantee the safety, the integrity, and the privacy of people in line with the principles of canon law and the good name of people involved in any investigation, or any trial or process.”

In this new legislation, he said, “there is a strong signal that what the pope promulgated in VELM has to be integrated now in all aspects of our procedures.” Describing this as “a very important development,” he explained that Pope Francis “has ironed out all these previous laws that were in conflict with VELM.” Consequently, “there is no doubt now that VELM is not only the more recent law, but it also presents and represents the policy of Francis on these cases.”

Archbishop Scicluna confirmed that because this new legislation has been published, the CDF can now complete the new Vademecum (or handbook) to help bishops and priests in combatting sexual abuse in their local dioceses and parishes. He expects it to be published early in the new year.