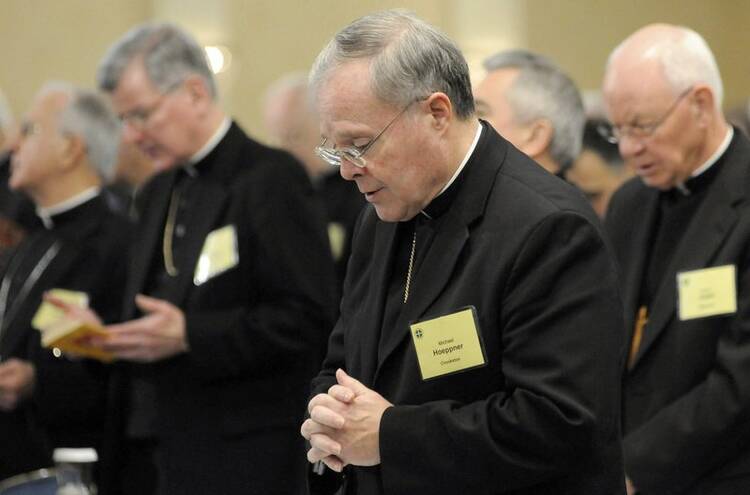 In this Nov. 10, 2008, Bishop Michael Hoeppner, center, of Crookston, Minn., prays during a semi-annual meeting of the United States Conference of Catholic Bishops in Baltimore. (AP Photo/ Steve Ruark,File)

MINNEAPOLIS (AP) — The Roman Catholic archbishop of St. Paul and Minneapolis said Wednesday that he has opened an investigation — the first known of its kind under a new Vatican protocol — into allegations that a bishop in northwestern Minnesota interfered with investigations into clerical sexual misconduct.

Archbishop Bernard Hebda said in a statement posted on the archdiocese's website that the investigation targets Bishop Michael Hoeppner of the Crookston diocese. Hebda said the allegations are that Hoeppner "carried out acts or omissions intended to interfere with or avoid civil or canonical investigations of clerical sexual misconduct in the Diocese of Crookston," but he gave no further details. He said law enforcement has been informed.

Advocates for clergy abuse victims say it's the first known investigation by one bishop into another under a groundbreaking church law issued by Pope Francis in May aimed at holding the Catholic hierarchy accountable for failing to protect their flocks. Among other things, it outlines procedures for conducting preliminary investigations of bishops accused of sexual misconduct or cover-ups.

Jeff Anderson, a St. Paul attorney who has represented hundreds of survivors of clerical sexual abuse, told The Associated Press that the allegations against Hoeppner likely stem from lawsuits against the Crookston diocese that have been settled, including one by Ron Vasek, who was aspiring to be a deacon when, he alleged, Hoeppner blackmailed him into signing a letter in 2015 that essentially retracted his allegation that a popular priest had abused him when he was 16.

That lawsuit was settled for an undisclosed sum in 2017. In July, the diocese reached a $5 million settlemen t with 15 people, including Vasek, who were children when they were sexually abused by priests. As part of the new settlement, the diocese agreed to release the names and files of clergy accused of abuse. Anderson said that information, along with depositions he took from Hoeppner and other Crookston diocese officials, will be released "in the days and weeks ahead."

Anderson said it appears Hebda will be taking a broader look at Hoeppner's handling of abuse allegations against priests, not just Vasek's case.

Janelle Gergen, a spokeswoman for the Crookston diocese, said neither the diocese nor Hoeppner would comment until the investigation is complete.

Information from the Minnesota investigation will be "promptly forwarded" to the pope's representative in the U.S. and to the Congregation of Bishops at the Vatican for a determination on whether further steps are needed, Hebda said. Leading the investigation will be the archdiocese's point person for sexual abuse allegations, Tim O'Malley, a former head of the state's Bureau of Criminal Apprehension.

The Vatican's new protocol for having one bishop investigate another is "not the full answer" but it represents progress, Anderson said.

"I'm encouraged that they're doing an investigation and I encourage them to do as much cleanup as they can," he said.

But Tim Lennon, president of the Survivors Network of those Abused by Priests, said the process isn't transparent. He said it's good that the allegations were reported to law enforcement. But having bishops investigate each another keeps everything inside the church, he said, and that leads to cover-ups.

While the Minnesota investigation is the first publicly announced under the new procedures, another might be coming.

The Catholic Herald reported Monday that Cardinal Timothy Dolan, of New York, was considering his responsibilities under the new law regarding allegations against the embattled bishop of Buffalo, Richard Malone, who has come under growing pressure to resign over his handling of reports of clergy misconduct. Dolan's spokesman, Joseph Zwilling, told the Herald, "I would anticipate that we will hear something within the near future regarding this matter." Zwilling was out of the office Wednesday morning and did not immediately respond to a phone message from the AP.