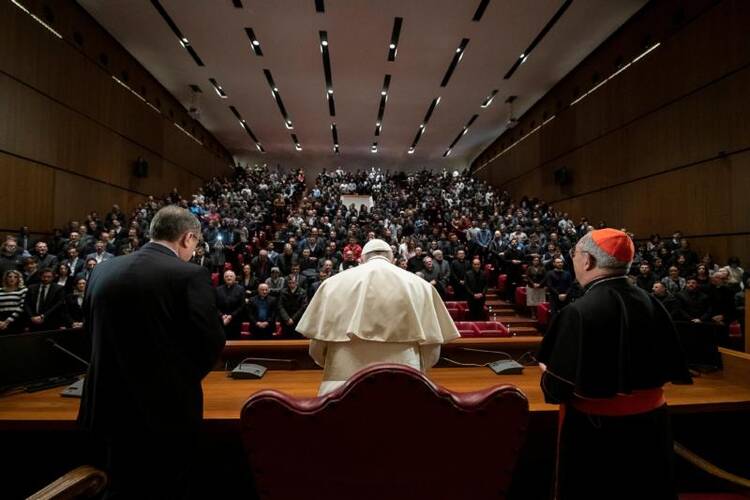 Pope Francis has issued a decree (“motu proprio”) for the protection of minors and vulnerable persons in the Vatican City State (VCS) and has also personally approved and signed the relevant new legislation and guidelines with the aim of preventing such abuses in that territory.

The Vatican published all three texts—the motu proprio, the new legislation for the penal code of the VCS and the guidelines—today, March 29, together with an explanatory note by Andrea Tornielli (editorial director of the Vatican’s Dicastery for Communication) on the significance and importance of the texts. Their publication can be seen as the first concrete follow-up to the summit meeting of the presidents of bishops’ conferences from around the world held in the Vatican in February.

All three texts apply only to the Vatican City State and those who are bound by its norms and legislation. While a great number of priests and women and men religious work in this small state, there are only a small number of children.

These texts take into account the most advanced international norms on the question of the protection of minors. These include the Convention on the Rights of the Child, which the Holy See ratified in 1990, and the Optional Protocol on the Rights of the Child regarding the sale of children, child prostitution and child pornography, which the Holy See ratified as a party to this international document in 2001.

Pope Francis: "We all have the duty to welcome with generosity minors and vulnerable persons and to create for them a secure atmosphere that has their interests as a priority."

In the motu proprio, Pope Francis states that “the protection of minors and vulnerable persons is an integral part of the evangelical message that the church and all its members are called to spread in the world.” He also says, “we all have the duty to welcome with generosity minors and vulnerable persons and to create for them a secure atmosphere that has their interests as a priority,” and he emphasizes that this requires a “continuous and profound conversion.”

He underlines the importance “of the duty to denounce the abuses to the competent authorities and to cooperate with them” and insists that “every abuse or maltreatment against a minor or vulnerable person” is to be prosecuted according to the law. Further, everyone who alleges “to have been victims of exploitation, of sexual abuse or maltreatment,” as well as their family members, “has the right to be received, listened to and accompanied.”

He emphasizes too the importance of “a fair and impartial” trial and “the presumption of innocence” for the person accused. He also states that the accused “be removed from his positions [of responsibility]” but also be given adequate support for psychological and spiritual rehabilitation. Francis also says that everything possible should be done to restore the good name of anyone who has been unjustly accused.

Significantly, the new legislation puts “vulnerable adults” on the same legal status as a child in the case of abuses in the Vatican City State.

Significantly, the new legislation puts “vulnerable adults” on the same legal status as a child. It defines a vulnerable adult as any person who “is in a state of infirmity, of physical and psychic deficiency, or de facto deprived of personal freedom, even occasionally,” or who cannot resist or understand the nature of the abuse.

The new legislation also decrees that all offenses or crimes against minors—not only those of a sexual nature but also any kind of maltreatment—are to be prosecuted. The statute of limitations on prosecuting past offenses is 20 years, though in the case of a minor that 20 year window begins after the victim’s 18th birthday. It also imposes the obligation on every public official to denounce without delay any abuse (of minors or vulnerable adults) in the Vatican City State. All those working in the VCS (and by extension in the Roman Curia and among the personnel working in the Holy See’s diplomatic missions around the world) fall under this new legislation.

The legislation details the procedures for initial hearings, investigation and judicial process, establishes structures for the accompaniment of minor victims within the VCS, and calls for the creation of programs of formation designed to prevent abuse. It also decrees that there be a proper screening of all persons employed in the VCS.

In addition to the motu proprio and the legislation, the pope has approved pastoral guidelines for the protection of minors in all the institutions of the VCS, similar to those now in force in many bishops’ conferences.

has Pope Francis been communicating with PM Theresa May in England--she has a talent for meaningless gestures so maybe he is learning something from her.

And just exactly what are the remedies for the wrongly, negligently, and maliciously accused? How do they restore their reputations when Holy Mother, the Church, refuses to stand by her children until they are proven guilty, plead guilty, or plea bargain? Even in Canon Law we are innocent until proven guilty. Credible is nonsense - either prove it or go after the accuser. The Pope needs to resign along with alot of the episcopacy - too many pedophiles have been protected by His Holiness and his colleagues. Far too many innocent people have been harmed, even thrown out of ministry and employment, with no way to redeem themselves. All the while we continue to hear pious platitudes about the innocent being restored; yet, no action.

It sounds good for Vatican city. Now can we have the rest of the world?