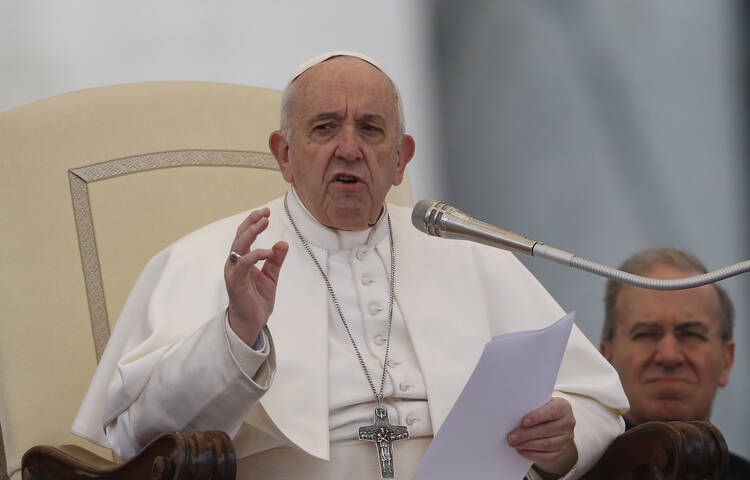 It obliges bishops in every diocese to establish, by June 2020, a system that is accessible to the public for the reporting of any of the following: the sexual abuse of minors or vulnerable adults; the use of violence or intimidation (whether with minors or adults) to engage in sexual acts; the possession or distribution of child pornography; and the cover-up of such conduct by bishops or religious superiors.

It leaves it up to the individual dioceses to decide what kind of system that diocese deems best for the task, but it requires the diocese to inform the papal representative of the system it has established. The pope’s motu proprio is a follow-up to the February meeting of the presidents of the bishops' conference on the protection of minors and draws on the norms approved by the pope for the Vatican City State on March 29.

The motu proprio imposes a universal and legally binding obligation on all clerics and religious to immediately report all accusations of abuse or the cover-up of abuse.

Cardinal Marc Ouellet, the prefect of the Congregation for Bishops, in a Vatican news interview said that the reference in the motu proprio to the harassment or violence or intimidation by abuse of authority “includes the cases of abuse of women religious by clerics, or the abuse of seminarians or novices by their superiors.”

The motu proprio imposes a universal and legally binding obligation on all clerics and religious (both men and women) to immediately report all accusations of abuse or the cover-up of abuse. Hitherto, it was left up to the conscience of individuals to do so.

It makes clear that this obligation does not dispense with any obligation that may exist under state or civil law to report the abuse to the authorities in whatever country the abuse occurs in.

The motu proprio introduces clear procedures for holding those in leadership positions in the church accountable, including bishops or religious superiors, for abuse or cover up and describes in some detail how this is done, and it explains the role of the metropolitan in this process and that of the relevant Vatican congregations, starting with the Congregation for the Doctrine of the Faith. If the accused is a bishop, the metropolitan receives a mandate from the Holy See to investigate. A metropolitan see, headed by a “metropolitan” archbishop, is the chief episcopal see of an ecclesiastical province, comprising neighboring dioceses.

The motu proprio “makes clear that there is no longer impunity in the church….No one in the leadership is above the law."

The motu proprio “makes clear that there is no longer impunity in the church….No one in the leadership is above the law,” Archbishop Charles Scicluna told a press briefing in the Vatican after the publication of the text.

The motu proprio insists that the Vatican offices must give timely responses to the metropolitan or other person responsible for a case. It envisages the possibility for the involvement of qualified lay persons in this work. The metropolitan must provide a report every 30 days to the Vatican.

The motu proprio decrees the protection of victims and all those who report abuse from “prejudice, retaliation or discrimination.” In Article Four, it states that “an obligation to keep silent may not be imposed on any person with regard to the contents of his or her report.”

According to Article Five, church authorities must ensure that “that those who state they have been harmed, together with their families, are to be treated with dignity and respect,” welcomed and listened to and provided with spiritual, medical and other assistance that they may require.

It insists on the presumption of innocence for the accused until the case against him or her is proven.

It also decrees the duty of the bishop or religious superior, or others with responsibility, to ensure the protection of all documentation relating to reports of abuse. It sets time limits for the opening and completing of an investigation, 30 and 90 days, respectively, and outlines the process leaders should follow once an investigation is complete. The motu proprio says the victim is to be informed regarding the development of his or her case.

It insists on the presumption of innocence for the accused until the case against him or her is proven and emphasizes the importance of “confidentiality” in the conduction of the investigation.

The motu proprio, known by its Latin title “Vos estis lux mundi” (“You are the light to the world”), contains 19 articles. A significant portion of the motu proprio deals with the problem of cover-up of abuse. Article One states that these norms also concern the behavior of those with specific responsibility in the church, like cardinals, bishops or religious superiors, who have acted in a way that “intended to interfere with or avoid civil investigations or canonical investigations, whether administrative or penal, against a cleric or a religious.”

It emphasizes the importance of protecting minors—anyone under the age of 18—and “vulnerable persons,” which it defines as “any person in a state of infirmity, physical or mental deficiency, or deprivation of personal liberty which, in fact, even occasionally, limits their ability to understand or to want or otherwise resist the offence.”

The motu proprio, which is universally binding and relates to both the Latin and Eastern Rite Churches, is a truly significant response to what is a global problem for the church and marks an important milestone in the pope’s effort to eradicate abuse and provide justice and healing for the victims.

No more secrets... Imagine if this Motu Proprio had been in place fifty years ago. It occurs to me that most, if not all, of our discussions about clergy abuse revolve around the ideas of prevention. Very little concerning the well-being of the shattered survivors and our families. We need Healing Centers for the walking wounded among us. Please. Remember us.

Sheila- I agree that something concrete must be put in place that provides healing for victims and their families, and also reaches out to those who have not been able to come forth. Some prefer not to ever go public, but need assistance nonetheless. I believe Pope Francis will make this part of his reform, I truly do. My heart goes out to you and your family, you are not forgotten!

Yes Sheila, one of my relatives being one of them., who suffers in silence, although the priest has recently been convicted. I have so much hope with Pope Francis. I genuinely believe he feels the pain and cares deeply for all victims. I'm just not nearly as confident in our bishops.

I am afraid to say that your trust is misplaced. When archbishop of Buenos Aires, there was a case where the law caught a pedophile priest and condemned him. The future pope tried to have this overturned on appeal. When a France 2 TV reporter tried to see him about this, she couldn't. So she questioned him to comment in St. Peter's Square. He was filmed just turning his back on her. Francis just wants to protect the church as he can, whihc is understandable, but he is on the wrong trail. Like the cardinal-archbishop of Lyon who said ''Thanks be to God, most of this cases are time barred''.

I am afraid to say that your trust is misplaced. When archbishop of Buenos Aires, there was a case where the law caught a pedophile priest and condemned him. The future pope tried to have this overturned on appeal. When a France 2 TV reporter tried to see him about this, she couldn't. So she questioned him to comment in St. Peter's Square. He was filmed just turning his back on her. Francis just wants to protect the church as he can, whihc is understandable, but he is on the wrong trail. Like the cardinal-archbishop of Lyon who said ''Thanks be to God, most of this cases are time barred''.

This action so clearly lays out the supervisory nature of the Vatican that we need to revisit its financial liability for local abuse. While it takes the pressure off of the need to abandon our Medieval structures, it does not end the real need to do so. Bishops are still too much like the Gentiles who give themselves honors.

Geez, a new rule that you should tell on guys who abuse minors or cover it up. Like no one was able before this to figure out that raping children and covering it up was a bad thing that should be reported? Is this really supposed to make some big difference?

PS - and there's no requirement to report the abuse or cover-up to civil authorities.

Yes, the Church judging it's own is dangerous. It has to be done by an independent source. And civil law, though not perfect, is the best option we have.

This is nothing more than another "dog and pony show". In the past, I had spoken to a member of clergy concerning a coworker and the ongoing theft of church money (even fron the poor box!!) to which I had evidence. This same evidence was ignored, "I refuse to accept this..." was Father's response. A complaint to the Office of the Bishop was met with, "We don't get involved in parish affairs." (!!??!! Really?) The lesson learned is that a report may be made but don't at all believe it will be followed up on or acted upon....clericalism at its finest. The only answer is to report any and all abuse to civil authority with a courtesy report to church authority. And why is there a response from on high? The money isn't coming in at nearly the same level, of course. This DID get their attention. A hit to itheir wallets does appear to get results just like in any big business. Yes, the scribes and pharisees are the hypocrites aren't they?... And Jesus weeps.

The interesting part of this is that the reporting of child abuse and neglect has been the law in the US since at least 1966. How'd that work out?

Report suspected cases to the civil authorities ? No. Defrock or excommunic

I was cut off in the middle of my message. Will now repeat in full.

Report suspected cases to the civil authorities? No. Defrock or excommunicate those proved guilty ? No mention. Business as usual.

Metropolitans investigating .... Teddy Bear McCarrick was a metropolitan. And if the Metropolitan doesn't want to investigate or won't see what's in front of his ideas, what is the accountability mechanism? Canon law still treats the bishop as liege lord of his fiefdom, er, diocese. For all the rhetoric about "clericalism" from the Cupichs of the world, their preferred outcome in this motu proprio is clerical to the hilt.