An invitation to God’s party: On the meaning of Christmas 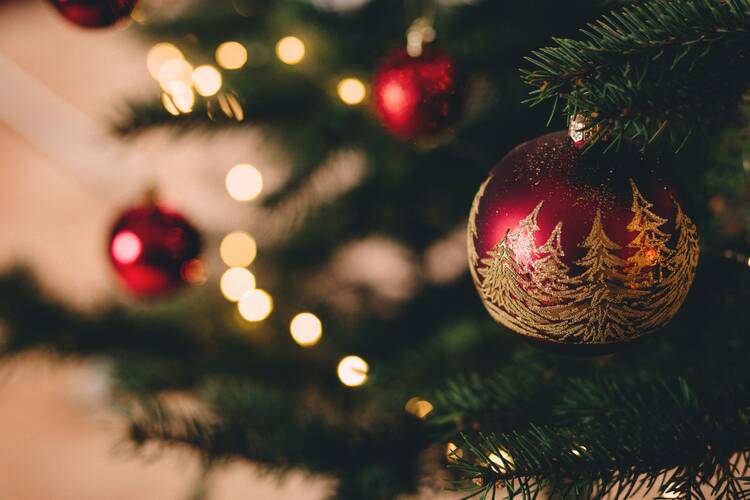 Merry Christmas! We know that greeting comes a bit early, but you’ll have to forgive us for putting the baby Jesus in the crèche preemptively this year, as this column will be on hiatus next week in honor of the Nativity. And Boxing Day, of course.

Longtime readers may remember that last year our Christmas column focused on one of the nation’s great writers and his entertaining essay on Santa Claus: “John Updike: Suspicious of Santa but fond of Christ.” In 1997, America honored John Updike with the magazine’s Edmund Campion Award for his contributions to religion and letters; Updike’s speech (reprinted in America) on the occasion is a beautiful reflection on faith and fiction. One of John Updike’s close friends through his life and also his onetime biographer was George W. Hunt, S.J., editor in chief of America from 1984 to 1998 and author of (among much else) John Updike and the Three Great Secret Things: Sex, Religion and Art.

George Hunt: "If it is true, as Aquinas said, that God created the world at play, then a fortiori God was definitely at play—partying—when he re-created that world in the image of his Son."

I was graced to know Father Hunt during his final years, when he was living at Fordham University, where for many years he headed the Archbishop Hughes Institute on Religion and Culture after his retirement from America. He always made me think of an Oxford don, erudite in ways beyond my ken and yet also possessing a lively and mischievous sense of humor.

When Father Hunt died in 2011, former Major League Baseball Commissioner Fay Vincent wrote: “My friend George Hunt is dead and my heart is heavy—not for him because I know he is with the God he served so faithfully all his life—but, of course, for myself.” He was regularly awed by Hunt, Vincent noted, “not so much by what he had read but by what he had remembered of what he had read. He was blessed with a simply superb mind and I think he enjoyed the use of it. He read just about all the time. I am not being hyperbolic when I claim he read at least three full books a week.”

George Hunt: "What kind of an earth shall we pass on to our children? Shall it be one in which the Word would wish to be enfleshed?"

Each editor in chief of America puts his own particular stamp on the journal, and the magazine took a more literary tone than usual during Hunt’s tenure. (It also featured a great deal more about baseball than it does these days, notes this author with a harrumph.) This was due in no small part to his own finely wrought contributions to the magazine, including a number of brief essays on Christmas. In each of them one can feel the love Father Hunt had for the craft of writing itself, as well as his deep and nuanced take on religion. (In addition to his literary pursuits, he earned a doctorate in theology at Yale.)

Here is Father Hunt at Christmas in 1987:

Christmas surely is the warmest of seasons, the privileged time of memories, gratitude and gift-giving. But since it celebrates the Incarnation, the union of the Timeless with Time, surely it must also be the season for contemplation on time itself, on our flesh’s fragility, on the earth in which the Word chose to dwell. For we have merely inherited and for a time borrowed the earth and its seasons from our parents and their parents before them. All the memories we have and share are inevitably linked with this earth—its odors, its sensations of cold and warmth, its textures, its colors, its sounds. Are we grateful for this creative Word? What kind of an earth shall we pass on to our children? Shall it be one in which the Word would wish to be enfleshed? If we are not serious about these earthly subjects, who will believe us when we speak about heavenly things?

And here in 1991, with cultural references both high and low (Disney’s “Beauty and the Beast” had come out that year):

Too often during the Christmas season we are distracted—shopping, cards, colds, travel—so that, as T. S. Eliot put it, “We had the experience but missed the meaning.” The first letter of John (4:10) distills the meaning into one sentence: “In this is love, not that we loved God but that He loved us.” The sign that we recognize the meaning is that we love each other. But this love is not philanthropy or liberal sentimentality or a warm benevolent glow: It is a love that must be history-shaking (our own private histories), disruptive of our dearly-held conventional values, generative of a newborn, non-beastly personality. A Christmas love.

And again, in 1994; this time, Father Hunt offered an unusual take on the meaning of grace, once perhaps worth remembering during holiday festivities.

At Christmas time we appreciate more what theologians term, in perhaps an overly abstract way, the mystery of “grace.” “Grace” simply means a “party,” replete with the positive connotations of the word that our language admits. For “parties” are at once convivial occasions, festive get-togethers and also companionable unions between the like-minded. If it is true, as Thomas Aquinas said, that God created the world at play, then a fortiori God was definitely at play—partying—when he re-created that world in the image of his Son.

Divine grace described as God partying? Not exactly Karl Rahner here, you’re thinking. And yet Rahner is exactly the reference point from which Father Hunt began—he had been reading a collection of Rahner’s homilies when he wrote those words. Regarding God’s party, he had this to say:

But an R.S.V.P. is attached to the invitation. As Karl Rahner reminds us, the Word in the announcement means: I love you. Our answer must be an echo of that word: Yes, I heard, I will be there at your party.

Merry Christmas! And as George Hunt and Karl Rahner were wont to say, party on.

George Hunt: "As Karl Rahner reminds us, the Word in the announcement means: I love you. Our answer must be an echo of that word: Yes, I heard, I will be there at your party."

Our poetry selection for this week is “The Christmas Spectacular,” by America poetry editor Joseph Hoover, S.J. Readers can view all of America’s published poems here.