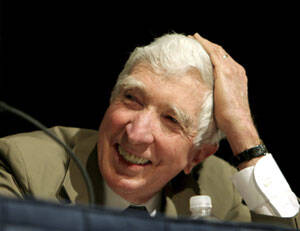 It is a thought-provoking, even disconcerting thing to be given an award as a "distinguished Christian person of letters," especially an award named for St. Edmund Campion. This brilliant Jesuit, a convert to Catholicism, was, history records, placed on the rack three times in an effort to make him recant his faith. But, though tortured in body, he continued to debate brilliantly with Protestant theologians and won converts among them. He eloquently refuted the prosecutions trumped-up charges of sedition, but was nevertheless hanged, drawn and quartered at the age of 41 in 1581.

How much of such persecution and agony, a recipient of the Campion Award cannot but wonder, would he endure for the sake of his religious convictions? It is all too easy a thing to be a Christian in America, where God's name is on our coinage, pious pronouncements are routinely expected from elected officials, and churchgoing, though far from unanimous, enjoys a popularity astounding to Europeans. As good Americans we are taught to tolerate our neighbors' convictions, however bizarre they secretly strike us, and we extend, it may be, something of this easy toleration to ourselves and our own views.

The modern Christian inherits an intellectual tradition of faulty cosmology and shrewd psychology.

In my own case, I came of intellectual age at a time, the 1950s, when a mild religious revival accompanied our reviving prosperity, and the powerful rational arguments against the Christian tenets were counterbalanced by an intellectual fashion that, a generation after Chesterton and Belloc, saw the Middle Ages still in favor, as a kind of golden era of cultural unity and alleviated anxiety. Among revered literary figures, a considerable number were professing Christians—T. S. Eliot and W. H. Auden, Flannery O'Connor and Marianne Moore, Evelyn Waugh and Graham Greene, Rose Macaulay and Muriel Spark.

The first recipient of the Campion Award, Jacques Maritain in 1955, was the leading but far from the only figure in a movement to give Thomism a vital modern face; at another pole, philosophical existentialism looked to the Danish Lutheran Soren Kierkegaard as a founder, and the stark but expressive crisis-theology of the Calvinist Karl Barth boldly sounded its trumpet against the defensive attenuations of liberal theology. Which is simply to say that when I showed a personal predilection not to let go entirely of the Lutheran faith in which I had been raised, there was no lack of companionship and support in the literary and philosophical currents of the time.

Had I been a young man in an atheist Communist state, or a literary man in the days when Menckenesque mockery was the dominant fashion, I am not sure I would be as eligible as I am to receive this award. But in fact yes, I have been a churchgoer in three Protestant denominations—Lutheran, Congregational, Episcopal—and the Christian faith has given me comfort in my life and, I would like to think, courage in my work. For it tells us that truth is holy and truth-telling, a noble and useful profession, that the reality around us is created and worth celebrating, that men and women are radically imperfect and radically valuable.

Though, as St. Paul as well as Luther and Kierkegaard knew, some intellectual inconvenience and strain attends the maintenance of our faith, at the same time we are freed from certain secular illusions and monochromatic tyrannies of hopeful thought. The bad news can be told full out, for it is not the only news. Indeed it is striking how dark, even offhandedly and farcically dark, the human condition appears as pictured in the fiction of Waugh and Spark and Graham Greene and Flannery O'Connor.

Is not Christian fiction a description of the bewilderment and panic, the sense of hollowness and futility, which afflicts those whose search for God is not successful?

While one can be a Christian and a writer, the phrase "Christian writer" feels somewhat reductive, and most writers so called have resisted it. The late Japanese novelist Endo Shusaku, a Roman Catholic and the Campion medalist in 1990, observed of his Western peers: "Mr. Greene does not like to be called a Catholic writer. Neither did Francois Mauriac. Being a Christian is the opposite of being a writer, Mr. Mauriac said. According to him, coming in contact with sin is natural when you probe the depths of the human heart. Describing sin, a writer himself gets dirty. This contradicts his Christian duty." Endo went on to say that he could consider himself a Christian writer only insofar as he believed that "there is something in the human unconscious that searches for God."

And, indeed, in describing the human condition, can we, as Christians, assert more than that? Is not Christian fiction, insofar as it exists, a description of the bewilderment and panic, the sense of hollowness and futility, which afflicts those whose search for God is not successful? And are we not all, within the churches and temples or not, more searcher than finder in this regard?

I ask, while gratefully accepting this award, to be absolved from any duty to provide orthodox morals and consolations in my fiction. Fiction holds the mirror up to this world and cannot show more than this world contains. But I do admit that there are different angles at which to hold the mirror, and that the reading I did in my 20s and 30s, to prop up my faith, also gave me ideas and a slant that shaped my stories and, especially, my novels.

The first, The Poorhouse Fair, carries an epigraph from the Gospel of St. Luke; the next, Rabbit, Run, from Pascal; the third, The Centaur, from Karl Barth; and the fifth, Couples, from Paul Tillich. I thought of my novels as illustrations for texts from Kierkegaard and Barth; the hero of Rabbit, Run was meant to be a representative Kierkegaardian man, as his name, Angstrom, hints. Man in a state of fear and trembling, separated from God, haunted by dread, twisted by the conflicting demands of his animal biology and his human intelligence, of the social contract and the inner imperatives, condemned as if by otherworldly origins to perpetual restlessness--such was, and to some extent remains, my conception.

THE MODERN CHRISTIAN inherits an intellectual tradition of faulty cosmology and shrewd psychology. St. Augustine was not the first Christian writer nor the last to give us the human soul with its shadows, its Rembrandtesque blacks and whites, its chiaroscuro; this sense of ourselves, as creatures caught in the light, whose decisions and recognitions have a majestic significance, remains to haunt non-Christians as well, and to form, as far as I can see, the raison d'etre of fiction.

John Updike is the author of many novels including Rabbit, Run, The Poorhouse Fair and Couples. He was awarded the Campion Medal by the editors of America in 1997.