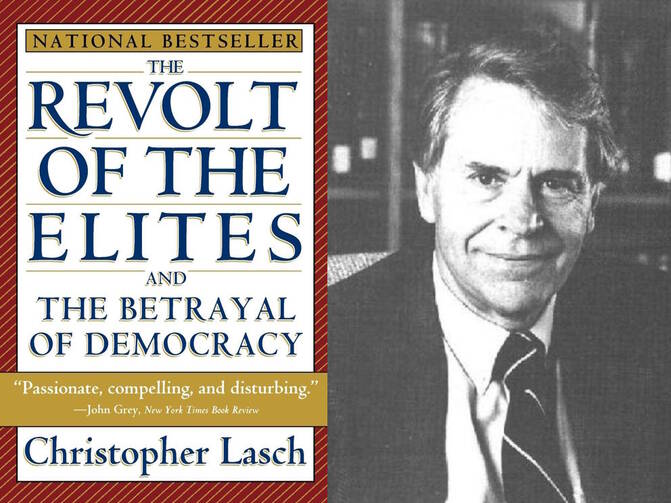 What does one make of a secular Marxist who is beloved by traditionalist Catholics? Of an author who was a favorite both of Jimmy Carter and of Steve Bannon? Of a thinker heavily influenced by Freud who made himself persona non grata among many mental health professionals for his jeremiads against contemporary psychology? You don’t hear about him as much anymore—he died in 1994—but there was a time when Christopher “Kit” Lasch was all but a household name.

You don’t hear about him as much anymore, but there was a time when Christopher “Kit” Lasch was all but a household name.

Lasch became famous with his 1979 book The Culture of Narcissism: American Life in an Age of Diminishing Expectations, though he was probably at his polemical and incisive best in the posthumous 1995 collection of essays, The Revolt of the Elites and the Betrayal of Democracy. There’s something in both for everyone to hate, and yet take a look at the footnotes in some of your favorite books: Lasch appears in the works of everyone from Robert Coles to the philosopher Charles Taylor to the political scientist Patrick Deneen to the late Jesuit environmentalist and theologian David Toolan, S.J.

Lasch never wrote for America—he wrote regularly for Commonweal later in life and was a contributing editor to The New Oxford Review, two journals that could not possibly be further apart on the Catholic spectrum—but his name came up often enough in America. When San Francisco Archbishop John R. Quinn wrote a critique for the magazine in 1991 of a proposal to distribute condoms to schoolchildren, he approvingly cited Lasch’s commentary in The Culture of Narcissism on government attempts “to erode and appropriate the authority and the role of parents in regard to their children.”

Eleven years later, Philadelphia Archbishop Charles J. Chaput, O.F.M.Cap., a prelate not often associated with Archbishop Quinn’s ecclesial views, also cited Lasch in America, for his description of modern Americans as “locked in a permanent present, permanently restless, permanently eager for change,” often at the expense of tradition and stability, in churches just as much as anywhere else.

In 2015, I had occasion to return to Lasch myself in a review of Elizabeth Lunbeck’s The Americanization of Narcissism in America. No fan of Lasch, Lunbeck described her book as a “mission to rescue the concept of narcissism” and to return it to the realm of psychoanalysis rather than cultural critique. She argued that much of what Lasch saw as narcissistic behavior in American life was actually a welcome increase in levels of self-esteem and assertiveness, and that some degree of narcissism is helpful in the development of ambition, creativity and empathy. (In her defense, the book was published before the election of Donald Trump.)

Lasch on Updike: “He is more industrious than I, but I think his stuff lacks perception and doesn’t go very deep. He is primarily a humorist. As he himself admits, he is probably a hack.”

Lasch was born in Omaha, Neb., in 1932, the son of a philosophy professor mother and a Rhodes Scholar father who later won the Pulitzer Prize for editorials criticizing the Vietnam War. Lasch himself attended Harvard University, where his roommate was—no joke—John Updike. “He writes poetry, stories and draws cartoons and sends all of these to various magazines. He has even had a few things accepted,” Lasch told his parents about Updike. “He is more industrious than I, but I think his stuff lacks perception and doesn’t go very deep. He is primarily a humorist. As he himself admits, he is probably a hack.” Updike later wrote a story about their time together, “The Christian Roommates,” that was made into a TV movie in 1984.

After receiving his doctorate in history from Columbia University, Lasch taught for a time at the University of Iowa and Northwestern University before moving to the University of Rochester, where he taught from 1970 to 1994. Between 1962 and 1977 he published five books that inveighed against American-style capitalism but also offered pointed critiques of progressive politics, including 1969’s The Agony of the American Left, a political position that earned him labels ranging from cultural conservative to neo-Marxist gadfly.

When The Culture of Narcissism was published in 1979, its condemnation of the therapeutic mindset he saw overtaking American community life firmly established Lasch as an important cultural critic and public intellectual. Soon after The Culture of Narcissism made the best-seller lists, then-President Jimmy Carter invited Lasch to the White House, and some of the book’s themes found their way into Carter’s infamous “malaise” speech in 1979. One can imagine this line from Carter’s nationally televised address coming straight from Lasch’s pen:

In a nation that was proud of hard work, strong families, close-knit communities, and our faith in God, too many of us now tend to worship self-indulgence and consumption. Human identity is no longer defined by what one does, but by what one owns.

Because Lasch was critical of divorce and legal abortion and was a strong proponent of the nuclear family, he was often associated in the 1980s with Reaganite politics, though he despised and often wrote against the libertarian thread running through 1980s American conservatism and was no fan of Reagan (he thought even less of William F. Buckley). His later writings had a strong focus on the negative effects of the American obsession with progress, including The True and Only Heaven: Progress and Its Critics (1991).

Soon after The Culture of Narcissism made the best-seller lists, then-President Jimmy Carter invited Lasch to the White House.

I first encountered Lasch as a college student in a course on political philosophy where we read several of the essays that would later appear in The Revolt of the Elites. In those essays, Lasch excoriated globalization and the increasing economic gap between the top 20 percent of American earners and the rest, arguing that the cosmopolitan cadres that increasingly dominated political and cultural life had little interest in accepting the obligations of citizenship or the duty to support their fellow citizens. Such “world citizens,” he wrote, had no reason to support traditional family structures, working-class citizens or the increasing number of Americans afflicted with crime, poverty, addiction or mental illness.

The Revolt of the Elites made Lasch something of a populist icon, which explains some of his appeal to the likes of Steve Bannon despite Lasch’s lifelong criticism of capitalism and the free market. But it also included some of his most religious thought, including “The Soul of Man Under Secularism,” an essay that trenchantly observed that our belief in “the right to be happy”—that uniquely American addition to Locke’s universal rights—was itself psychologically immature. The truly effective counter in American life was religious belief and practice, Lasch noted: a recognition of the transcendence of God and the acceptance of limitations on our ambitions and appetites as a result. As he often did, Lasch comes across as quite the grump on the subject—but as usual, he had a point.

Lasch trenchantly observed that our belief in “the right to be happy”—that uniquely American addition to Locke’s universal rights—was itself psychologically immature.

Our poetry selection for this week is “Fellowship,” by Christian Wiman. Readers can view all of America’s published poems here.