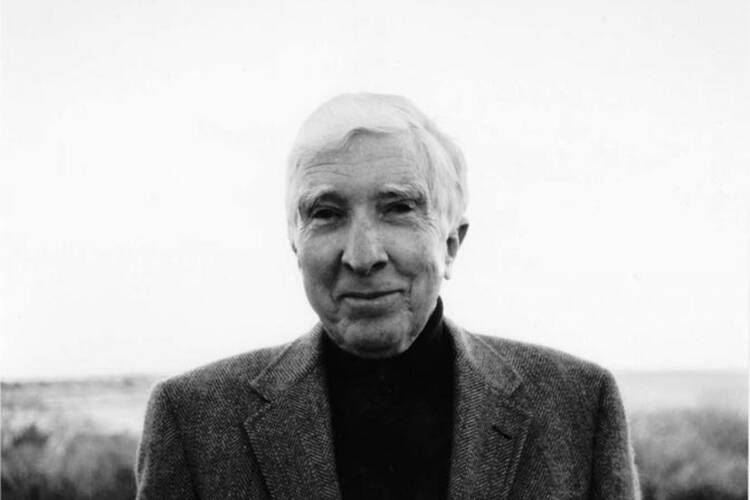 “A man of no plausible address, with no apparent source for his considerable wealth, comes down the chimney after midnight while decent, law-abiding citizens are snug in their beds—is this not, at the least, cause for alarm?”

This is the week to ask: What exactly is Santa Claus up to? John Updike wrote the above about the suspicious fat man who breaks into our homes for his brilliant comic piece, “The Twelve Terrors of Christmas,” first published in The New Yorker at Christmastime in 1992 and later released as a little book illustrated by Edward Gorey. The tone of it is classic Updike—dryly reported detail that provokes a laugh and an insight into the weirder aspects of accepted cultural tenets.

This is the week to ask: What exactly is Santa Claus up to?

One of only four writers to win the the Pulitzer Prize for fiction more than once (for Rabbit is Rich in 1982 and Rabbit at Rest in 1991; he also won the National Book Award in 1964 for The Centaur), John Updike published more than 50 books, among them more than 25 novels, a number of short story collections, prose collections of his essays and literary reviews, books for children and personal memoirs. His cultural criticism also appeared regularly in the nation’s most prestigious journals and newspapers.

When he died in 2009, America’s obituary for the great writer was written by former editor in chief George W. Hunt, S.J., who had written on Updike himself and also been a longtime friend. (George got away with a title that probably would not have made it past the censors in previous ecclesiastical ages: John Updike and the Three Great Secret Things: Sex, Religion and Art.)

Father Hunt commented in his obituary that when America had honored Updike in 1998 with its Campion Award, given to a distinguished person of letters, “I noted in these pages that he was the most stunning of many omissions from the ranks of English-language authors who had won the Nobel Prize, because he was not only the finest writer in this nation but also the foremost English-speaking ‘Man of Letters.’”

Upon receiving the prize, Updike gave a talk at America on faith and fiction that later appeared in the magazine under the title “A Disconcerting Thing.” It is a beautiful piece of prose writing, up there with Updike’s most well-known non-fiction works. Unlike Edmund Campion, S.J., who had given his life for his Catholic faith, Updike noted, most Americans didn’t have to face such stark realities. “It is all too easy a thing to be a Christian in America, where God’s name is on our coinage, pious pronouncements are routinely expected from elected officials, and churchgoing, though far from unanimous, enjoys a popularity astounding to Europeans,” he commented. “As good Americans we are taught to tolerate our neighbors’ convictions, however bizarre they secretly strike us, and we extend, it may be, something of this easy toleration to ourselves and our own views.”

George Hunt, S.J., on John Updike: "He was not only the finest writer in this nation but also the foremost English-speaking ‘Man of Letters.’”

At the same time, he said that his Christian faith “has given me comfort in my life and, I would like to think, courage in my work. For it tells us that truth is holy and truth-telling, a noble and useful profession, that the reality around us is created and worth celebrating, that men and women are radically imperfect and radically valuable.”

“The modern Christian inherits an intellectual tradition of faulty cosmology and shrewd psychology,” he wrote. “St. Augustine was not the first Christian writer nor the last to give us the human soul with its shadows, its Rembrandtesque blacks and whites, its chiaroscuro; this sense of ourselves, as creatures caught in the light, whose decisions and recognitions have a majestic significance, remains to haunt non-Christians as well, and to form, as far as I can see, the raison d’être of fiction.”

Father Hunt quoted the above in his obituary, noting that “Updike’s attempt to express that chiaroscuro at the heart of the human endeavor was a central motif not only in his art but in his life.”

Fans of John Updike might also enjoy this 2009 America column by James Martin, S.J., who was present at the aforementioned Campion Award reception and was seated next to John Updike’s wife Martha. Discussing with her how wonderful it was to live in New York City, he thought to mention a famous quote from a clever writer: “The true New Yorker secretly believes that people living anywhere else have to be, in some sense, kidding.”

He caught himself just in time; the originator of that line, of course, was her husband, John Updike.

John Updike: “The true New Yorker secretly believes that people living anywhere else have to be, in some sense, kidding.”