A Catholic guide to Halloween reading 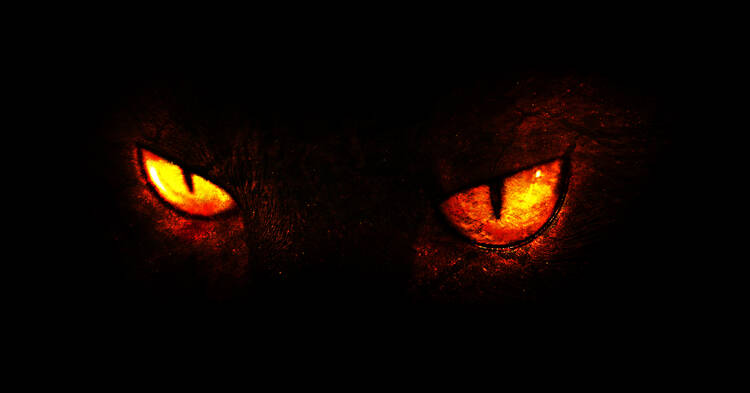 Halloween is less than a week away! These days it’s mostly about pumpkins and candy and navigating the steep and narrow path between “great costume, Bill!” and “could I see you in my office, Bill?” But the holiday has deep roots in the Catholic tradition and many pre-Christian cultures. Two important Catholic feasts—All Saints and All Souls—as well as numerous agricultural festivals around the world have links to what can seem like a very secular holiday.

In the worlds of literature and media, Halloween is also associated with horror. A few years ago on Halloween, we asked America editors and contributors to recommend their favorite tales of terror. The results included some literary classics as well as some unexpected gems.

Richard Doerflinger on Dean Koontz: “For decades a religious vision has suffused Koontz’s work, making him the most popular explicitly Catholic novelist in the world."

Without question, my own extended experience with literary terror was Stephen King’s IT, since made into a (great) television miniseries and two (mediocre) movies. And two of King’s other novels made the America list. But IT is big and baggy, clocking in at over 1,100 pages, and for long stretches is not a horror novel at all, but an extended coming-of-age tale. You’re not reading it over one terrified night, even though you’re also not going near a sink in the dark for many moons. For the true “fright night” experience, I had to go with Dean Koontz’s Midnight.

Part of the terror of Koontz’s fast-paced visit to the town of Moonlight Cove is that every character who becomes a monster seems perfectly benign: a parish priest eating his breakfast, two loving parents, a by-the-books sheriff. But there was also something about how Koontz described the gait of the half-human ghouls of Midnight that made me afraid of the beach at night for years: “splashing through the edge of the foam-laced sea, loping on all fours, the size of a man but certainly not a man, for no man could be so fleet and graceful in the posture of a dog.”

I wasn’t the only contributor to pick Dean Koontz: Richard M. Doerflinger picked What The Night Knows, warning it is “not for the faint of heart.” Doerflinger knows his way around Koontz’s oeuvre, having written a fascinating profile of the author for America in 2018. He noted that Koontz, who was raised Catholic and returned to the church as an adult after years away, is as much a religious writer as anything else. “For decades a religious vision has suffused Koontz’s work, making him the most popular explicitly Catholic novelist in the world,” he wrote. That’s an understatement: Koontz has sold almost 500,000,000 novels.

Robert Sullivan on Flannery O'Connor: “Piety, certainty and an unexamined life often propel a protagonist toward a kind of damnation on earth. That scares me more than zombies do.”

But why would any religious author “promote the truth about the world through tales of horror and violence”? Doerflinger noted that one of Koontz’s favorite authors is Flannery O’Connor, who “sought to ‘make belief believable’ in an increasingly secular world by placing characters in situations that disrupt their lives (and shock the reader) to the core.”

O’Connor was the choice of another America contributor for scariest tale: Senior editor Robert David Sullivan chose her short story “A Good Man is Hard to Find.” “Extreme gore makes me want to put a book down, but it also dissipates from my mind pretty quickly,” Sullivan writes, whereas O’Connor’s fiction relies less on blood than on dread: “Piety, certainty and an unexamined life often propel a protagonist toward a kind of damnation on earth. That scares me more than zombies do.”

Two America editors picked Edgar Allen Poe; both are Jesuits, a religious order for whom Poe had a certain affinity; according to legend, Poe—who lived near Fordham University’s Bronx campus and was friends with Edward Doucet, S.J., who later became Fordham’s president—enjoyed the company of Jesuits because they were “highly cultivated gentlemen and scholars, they smoked and they drank and they played cards, and they never said a word about religion.” Probably apocryphal (I’ve never seen a source), but as the Italians say, se non è vero, è ben trovato—“Even if it’s not true, it should be.”

America’s poetry editor, Joe Hoover, S.J., picked Poe’s short story “The Cask of Amontillado,” less a tale of suspense than of sheer malice, and one imitated countless times on movie and television screens. America editor in chief Matt Malone, S.J., picked Poe’s “The Tell-Tale Heart.” The macabre account of a disembodied heart that won’t stop beating (or is it the author’s own heart pounding in his chest?) caused a young Malone some terrors at the age of 12: “I think of Poe whenever I’m lying in bed and aware of my heartbeat. Second, since then, I’ve never been able to sleep comfortably in a room with an unlocked door.”

Edgar Allan Poe had other interests besides the occult and the terrifying, as Franklin Freeman detailed in Americain his 2021 review of John Tresch’s The Reason for the Darkness of the Night. Poe, by Tresch’s account, was more a scientific writer than a teller of dark tales. He paid close attention to scientific developments throughout his life, and regularly reviewed scientific books and periodicals. He even wrote a school textbook, The Conchologist’s First Book, that became a best-seller.

Many scientists also credit Poe with coming up with an early version of the “Big Bang Theory” on the creation of the universe. “After his wife Virginia died, Poe, in the autumn of 1847, wrote his last major work: Eureka: A Prose Poem, also called An Essay on the Material and Spiritual Universe,” Freeman writes. “Here, Poe proposed his version of the Big Bang and the pantheistic idea that spirit and matter are one.” It was Poe’s most cherished piece of writing: He told a relative that “I have no desire to live since I have done ‘Eureka.’ I could accomplish nothing more.”

Did that extended immersion into the world of science over the course of his life paradoxically make Poe so brilliant at telling tales of the supernatural and the terrifying? Tresch concluded that Poe had “sharpened the piercing light of reason and deepened the darkness in its wake.”

Matt Malone: “I think of Poe whenever I’m lying in bed and aware of my heartbeat. Second, since then, I’ve never been able to sleep comfortably in a room with an unlocked door.”

Our poetry selection for this week is “The Naming,” by Christine Higgins. Readers can view all of America’s published poems here.

1
Exclusive: Pope Francis denounces polarization, talks women’s ordination, the U.S. bishops and more
The Editors
2
The story of ‘Carol of the Bells,’ a Christmas classic born in Ukraine
Jim McDermott
3
Jesuit Karl Rahner was one of the most influential theologians of the 20th century. But he was first and foremost a priest.
Kevin O'Brien
4
Interview: Bishop Stowe wants the USCCB to take Pope Francis’ priorities seriously
Kevin Clarke
5
Advent asks us: Have we lost our way?
Terrance Klein