Explainer: Where did Halloween come from—and should Catholics celebrate it? 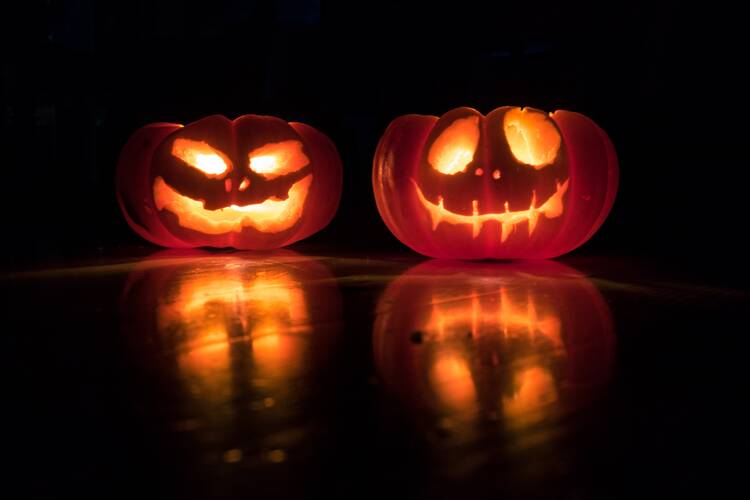 Photo by David Menidrey on Unsplash

While Halloween has been seen as a largely secular holiday for many years in the United States, it has deep roots in the Catholic tradition—and many pre-Christian European cultures. Because of this mixed legacy, families in many faith traditions—Christian, Jewish and Muslim among them—routinely face questions about whether or not the holiday aligns with the principles of their faith. Catholics, though, are not monolithic when it comes to their opinions on the topic; plenty embrace the day as a harmless secular tradition, while others abstain from haunted houses and spooky costumes. Some objections to the celebration are historical, but others relate to the contemporary customs that can detract from its intended meaning.

Most sources trace the pre-Christian roots of Halloween to the Celtic harvest festival known as Samhain.

The Origins of Halloween

Most sources trace the pre-Christian roots of Halloween to the Celtic harvest festival known as Samhain, traditionally celebrated on the last day of October into the first of November. Samhain was believed to be the time of year when supernatural spirits could be visible to and in touch with people on earth. Certain contemporary Halloween traditions, such as pumpkin carving and trick-or-treating, can trace their roots back to Celtic practices. Jack-o-lanterns were originally carved from turnips or potatoes in Ireland and Scotland and were believed to prevent evil or mischievous spirits from entering the home. (For a folksier version about “Stingy Jack,” the scheming Irishman whom God wouldn’t let into heaven and Satan wouldn’t let into hell, click here.) The tradition of trick-or-treating is believed by some scholars to have evolved from a Celtic ritual where people dressed as ghosts and demons and danced around a bonfire, receiving treats to appease evil spirits.

But Halloween also finds a long heritage in the Christian observance of All Saints Day. While the feast day was originally held in March, Pope Gregory III transferred its observance to Nov. 1 in 844. Sources disagree about whether that change of date had any connection to the Celts’ celebration of Samhain, with some saying they are completely independent and others suggesting that the Catholic Church wanted to bring non-Catholics into the church by adopting some of their previously held traditions for Christian purposes. The latter theory makes some sense for Ireland, which is rich with religious shrines that have druidic and pre-Christian origins, including holy wells, holy mountains and the “thin places” where the supernatural and the mundane meet. (There is no clear evidence, however, that the pope knew about Samhain).

The name “Halloween” comes from the day’s role in Christian tradition as All Hallows Eve, or a vigil before All Saints Day.

Either way, the name "Halloween" comes from the day’s role in Christian tradition as All Hallows Eve, or a vigil before All Saints Day. Remembering those who have died and gone to their heavenly reward, the purpose of All Saints Day is itself the inspiration for much of the ghostly feel around Oct. 31. The broader focus of the liturgical calendar this time of year on the end times and death adds to the thoughts of mortality and the supernatural that define the holiday. The church’s culture of festivals for feast days was once more vibrant than it is in most parts of the world today, so in some ways a celebration on the eve of a feast day, like Halloween, can actually be seen as quite traditional.

After the Protestant Reformation in Europe, waves of anti-Catholic sentiment often led to the suppression of holidays that lacked purely scriptural roots or that were associated with pre-Christian rituals. In post-Reformation England, the celebration of both Halloween and Christmas was suppressed (even Christmas carols were banned), and related customs were outlawed. Centuries passed before some traditions were resurrected.

Looking for a spooky read? Here are Catholic horror books to keep you up at night.
America Staff

Of course, the secularization and commercialization of Halloween can sometimes come with problems for Catholics. In the face of so many things to purchase for the day that have nothing to do with its religious origins, those origins can fade into the background. In response, some parishes and other faith communities have children dress up as saints for All Saints Day, combining the fun costume traditions of Halloween with a clear remembrance of the feast day.

This year, the Covid-19 pandemic is forcing families to reconsider how they will celebrate Halloween amid public health and safety concerns. The pause in the normal frenzy of candy consumption and costume preparation may have a positive side, however. Rather than focusing on the occult or demonic forces that have become widespread symbols of Halloween in many celebrations, Halloween can instead be a chance for celebration and feasting within families that reminds us of the saints, our ancestors and the many stories we have of both. Even fright and disguise can provide an opportunity for conversations, in families and elsewhere, about the supernatural in ways that enforce the tenets of the faith and remind us of the true meaning of a feast.