Looking for a spooky read? Here are Catholic horror books to keep you up at night. 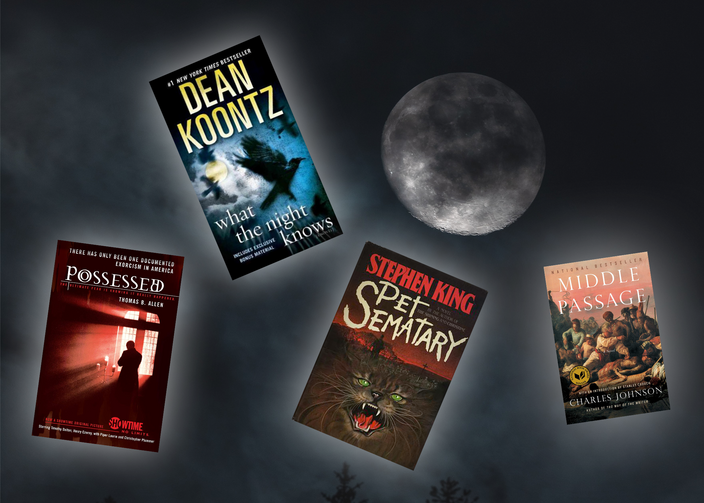 Not everyone chooses to subject themselves to reading books of horror, but there is catharsis awaiting the brave souls who opt for a literary trip through the heebie-jeebies in dim lamplight. Here, in the spirit of Halloween, we offer a selection of frightening books with Catholic themes—some written by Catholic authors, some not—that will haunt you into at least tomorrow, and maybe forever.

I read Dean Koontz's Midnight as a teenager, and it scared me half to death. Koontz is Catholic, and his novels tend to be rich with sacramental imagination (in terrifying ways). Midnight is the tale of a small town that is suddenly beset by half-human monsters. We eventually find out that they are the creation of a mad scientist seeking superhuman strength and immortality. They stalk their human prey with “long, loping strides” (for months after we read it, my sister imitated that terrifying gait on the regular), and appear by day to be normal people. One is even the parish priest!

It’s not a full length book, but a short story. When I was a boy in the sixth grade, about 12 years old, a teacher assigned it. I think it was the first scary thing I’d ever read. It had two lasting effects and later prompted an insight. First, I think of Poe whenever I’m lying in bed and aware of my heartbeat. Second, since then, I’ve never been able to sleep comfortably in a room with an unlocked door.

The insight came much later: How the beating Sacred Heart of Jesus can similarly haunt me, but that it has the opposite effects—consolation and freedom, rather than paralyzing terror. His grace relieves anxiety and opens doors. By way of contradistinction, then, the macabre can sometimes reveal the ways of the Holy Spirit.

Is it Catholic? Yes. How is it Catholic? I read it and I’m Catholic, the school where I read it was Catholic and Edgar Allen Poe used to drink with Jesuits at Fordham University. Fortunato insults the narrator, never named. The narrator takes Fortunato down into the catacombs, cold, damp, the walls crusted with nitre. Subsequently, the name Fortunato becomes a cruel irony.

The Exorcist, by William Peter Blatty, is the most frightening novel I have ever read about the Catholic Church. But surely the most frightening nonfiction book was the real-life story upon which Blatty’s bestselling novel was based. The true tale told in Possessed, writtenby Thomas B. Allen, centered on a boy in St. Louis in 1949. It rather calmly shares the viewpoints of William S. Bowdern, S.J., and Walter Halloran, S.J., then members of the Jesuit community at St. Louis University. There were occurrences too horrifying and too incredible to include in the documentary that followed. As I recall, the final expulsion of evil happened as the young boy was being wheeled past a statue of St. Michael the Archangel. A voice was heard saying, “Leave him!”

“A Good Man Is Hard to Find”

Extreme gore makes me want to put a book down, but it also dissipates from my mind pretty quickly. It’s the potential for tragedy in ordinary life that scares me, especially when it outraces our abilities to apply reason. So the Catholic writer Flannery O’Connor has always left me in need of a calming drink (or a cheery sitcom episode). “A Good Man Is Hard to Find” is her most famous bit of horror, all the more shocking for its no-way-out brevity, but several of her other short stories end in violence that, for its central characters, is a long time coming. Piety, certainty and an unexamined life often propel a protagonist toward a kind of damnation on earth. That scares me more than zombies do.

This book made me even more scrupulous than usual—for months. Lewis conjures up demons in Hell who are dead set (no pun intended, I suppose) on securing the damnation of a man they are charged with guiding toward evil. Lewis’s astute observations about human nature's shortcomings are creepy because the pitfalls are so true and normal in everyday life and therefore easy to miss. Plus, the idea of a little devil whose job is to make sure you fail in life and never even notice until you end up in Hell? What’s scarier than that?

If you’re going to read some scary Catholicy horror for Halloween, you really can’t go wrong picking up the granddaddy of them all. Though born of hearty Church of Ireland stock, Stoker could not escape the visceral appeal of the incense-burning, knee-bending, rosary-counting Irish Catholicism that surrounded him in Dublin. Fleeing all that Roman blood and gore, Stoker throws together a sturdy league of British and American Protestant gentlemen in pursuit of that most bloodthirsty villain, the presumably former Catholic Count Dracula himself.

You want to be horrified? Try contemplating decent 19th-century Protestant lads forced to wield rosaries and crucifixes and, worst of all, consecrated hosts in a climactic defense of dear Mina’s faltering virtue. Come for the heart-stopping race across the Carpathians; stay for the barely suppressed psychosexual longing!

This is a slender, ferocious book: an adventure tale of mutiny on a slave ship, and a deeply theological meditation on the nature of division and communion. Johnson, a black American Buddhist, sends his freedman hero to Africa to escape a forced marriage, only to discover that his ship’s intended cargo is human beings. What follows includes a stolen god, a universal language, cannibalism and gore, fog and apocalypse, classical allusions and pungent nautical slang. If H. P. Lovecraft were antiracist not pro-, and if he had hope instead of only disgust, he might write like this.

Twenty years ago, 14-year-old John Calvino managed to kill a serial killer who was attacking him after murdering John’s family. Now, somehow, the killer has returned and wants to exact vengeance by killing John's wife and children. But how do you defeat a ruthless spirit who can enter and control the next person you meet—perhaps even yourself?

The endangered family is Catholic, and this figures in the plot. More important, evil can be defeated only by self-sacrificing love—and by something called “the power that makes a highway through a sea.” Not for the faint of heart.

The scariest book I've ever read. What makes it Catholic? The vampires. Vampires are repelled by things that are holy. The book also prominently features an Irish priest, and what is more America magazine than Irish priests? The biggest takeaway for me was learning how not to invite vampires into your house. They can't enter unless you invite them in—which can get tricky when the vampire knocking on your window is your grandpa. Great book. Couldn't sleep for days.

Stephen King tells the story here of parents who lose their young son in a roadside accident and the horror that follows when the boy's father tries to bring him back. It’s a meditation on the shattering revelation that our lives are not the happy fiction we imagine—us in control, everything going to be fine. In loss we face our existential frailty, and so often that’s when the demons within us come out.

While King is not usually considered a “Catholic writer,” his work is imbued with belief in a benevolent God trying to help us, and an awareness of how pain and pride can overcome us. If Richard Rohr wrote a horror novel, I think it might read like Pet Sematary.

The book’s world is an alternate universe, one where the past flows backwards into the present and where people’s shadows defy the laws of physics. What is this New York City that so closely resembles our own? And yet, not quite. Didn’t he die in that war? Why hasn’t she aged? And why is no one affected by the sweltering heat of this room? (Look at the thermostat; we should all be broiling!) Perhaps everyone here is already dead.

There is nothing comforting about this book. It's raw and real and totally engaging. Journeying in the midst of utter devastation, a father and son bond along the way. It’s not ghosts and witches scary; it’s on-the-verge-of-losing-your-humanity scary...which is much scarier.