Yes, J. F. Powers wrote about priests. But his real subject was America. 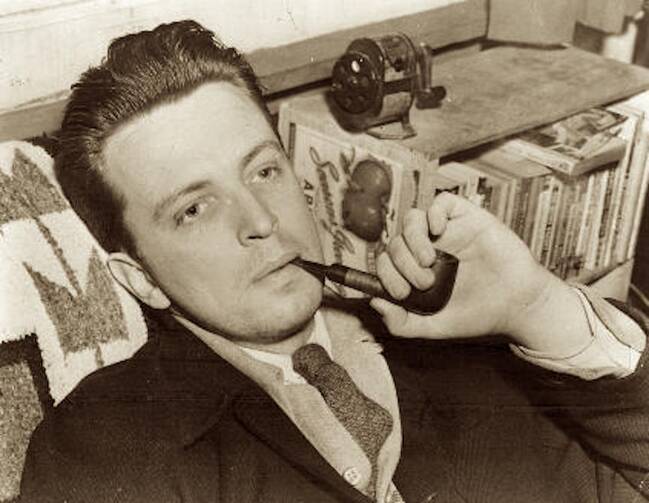 What is worse, a sin of commission or one of omission? In the case of the obituary writers of The New York Times over the decades, the latter failings call out more loudly for repentance. Any survey of the accounts of lives of religious novelists is all the evidence you need. With what words would you bury Evelyn Waugh? The Times chose “Evelyn Waugh, Satirical Novelist, Is Dead at 62.” His greatest triumph, Brideshead Revisited, is described as (not kidding) “a tragic recounting of the decline of a great English family.”

J. F. Powers didn’t fare much better. This finalist for the National Book Award in Fiction for 1957, the winner of that award in 1963, a writer hailed as a literary lion by everyone from Flannery O’Connor to Philip Roth to Mary Gordon to Frank O’Connor, was dispatched upon his death in 1999 with “J. F. Powers, 81, Dies; Wrote About Priests.”

I suppose it’s not entirely wrong: Both of his novels (Morte D’Urban in 1962, Wheat That Springeth Green in 1988) and many of his short stories had priests as protagonists, and surely no American writer has ever captured the quotidian existence of parish priests better than Powers. But you wouldn’t bury a writer with “Hemingway: Wrote About Drunks,” nor “Melville: Wrote About a Whale.” There’s a sneer behind the headline, the passing regret that J. F. Powers didn’t write about something more compelling.

Note how James Wood began his The New Yorker essay on Powers in 2000 after the author’s works were republished (they had all gone out of print) by The New York Review of Books: “Does anyone, really, like priests?” Wood noted that “it seems sadly likely that the combination of Powers’s refined style, ironic pessimism, and chosen subject—priests and more priests—will eventually deal his work a second death.”

What Wood and more than a few other critics over the years missed is that Powers’s chosen subjects—in cassocks or nay—are inevitably all-American, and both his novels as well as many of the short stories are careful (and yes, ironically pessimistic) studies of American mid-century life and ambition. Father Urban and Father Joe (the protagonists of Powers’s novels) are not saints or mystics; neither is even a pious man. Yes, they are holy in their own way, and Powers gives them worthy dénouements that befit a Gospel parable, but at heart they are Midwestern American men who want a promotion in the corporation. A bigger church, their own parish, a more important position in their religious order; maybe, after a few beers, they have a fanciful thought or two of one day becoming a bishop.

Powers’s chosen subjects—in cassocks or nay—are inevitably all-American, and his stories are careful studies of American mid-century life and ambition.

Powers is in on the joke. The ambitions of both men—as well as of other priests in his short stories, as in the absolutely brilliant “Prince of Darkness”—are as pedestrian and banal as those of the life insurance salesman who tries to sell them a plan or the real estate agent with a pile of old brochures. Powers’s priests, otherworldly or foreign as they might be in the popular imagination, are concerned with what “the Arch downtown” thinks of them as much as any working stiff thinks of his or her boss.

In a 2014 essay for America, Kevin Spinale, S.J., noted that “there are no unspeakable sins” in Powers’s stories of priests, “just sloth, cruelty, ambition and pride.” His characters “convey authenticity without paroxysm. They inhabit a world embraced by a merciful God and made holy by the Incarnation. Powers offers humor with hope.” One gets the sense that while Powers (a daily Massgoer) loved the church immensely, he also saw the artistic value of it—in all its brokenness as well as its beauty—as a background for fiction that traced the vanities and frailties of humankind. In 1964, he said of the institutional church, “there’s nothing bigger, cruder, more vulgar in the world.”

In many stories, he uses the sometimes-narrow confines of priestly life to show the power of a humbling (humiliating?) moment or two to bring a would-be Icarus back down to earth. Along the way, he always tells a rollicking good tale, full of sly humor and apt observations of the human condition. As a young seminarian in Wheat That Springeth Green, Joe Hackett asks in all sincerity, “How can we make holiness as appealing as sex?” As a world-weary pastor later, he drives past the first liquor store on the road because the proprietors are Catholic; it would be unseemly for a priest to be returning so many empties. Then he passes by the second because the proprietors are Protestant, and that would be worse. Well, duh.

Powers uses the sometimes-narrow confines of priestly life to show the power of a humbling moment or two to bring a would-be Icarus back down to earth.

Born in 1917 in Jacksonville, Ill., Powers studied at Northwestern University in Chicago but never earned a degree. He was a conscientious objector in the United States to the Second World War (one of over 40,000; Gordon Zahn was another);  when the concept was not recognized by the U.S. Army. After being briefly imprisoned, Powers was allowed to work as a medical orderly for the war effort. He found his first literary success in 1947 (after and amid various careers as an editor, bookshop proprietor, insurance salesman and more) with Prince of Darkness and Other Stories, a beautiful and somewhat timeless collection.

Two other collections and Morte D’Urban followed, and he finished his second and final novel, Wheat That Springeth Green, 25 long years after his first. He and his wife Betty (also a writer) had five children and moved back and forth from Ireland several times, eventually settling down in Collegeville, Minn., where he taught writing.

When Powers died in 1999, the great novelist Jon Hassler eulogized him in America, noting that “since the death eleven years ago of his wife, Betty, he seemed like a man adrift, a solitary soul who cared nothing for convention and seemed to care even less for public opinion.” Powers himself was always much more otherworldly than the priests of whom he wrote—with some dire consequences, including times of destitution for him and his family. His inability to finish his second novel also weighed on him; his daughter later wrote that he kept every note of inquiry from his publisher on a spindle on his desk, the stack growing higher year by year.

His letters showed that he always had in mind a novel “about a family man—an artist with ambitions who is driven down in what she calls ‘a hopeless contest with human needs and material necessity.’”

Like his priests of his fiction, J. F. Powers found his ambitions frustrated by the mundane details of life. And yet like those same priests, his work transcended those worldly ambitions.

J. F. Powers found his ambitions frustrated by the mundane details of life. And yet like the priests of his fiction, his work transcended those worldly ambitions.

[Editor's note: The number of conscientious objectors to the Second World War in the United States was more than 40,000. The article has been updated.]

Our poetry selection for this week is “A Nun Leaves the Veil,” by Julia Alvarez. Readers can view all of America’s published poems here.

[Editor's note: The number of conscientious objectors to the Second World War in the United States was more than 40,000. The article has been updated.]