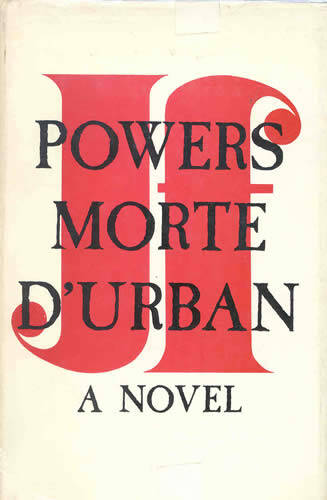 What makes a priest or consecrated religious worldly? Is it care for finances or fundraising? Is it a taste for fine clothing, food and drink? Is it love of opera or devotion to televised sports? Does a worldly priest or religious simply mean an individual whose spiritual life collapses into a prayerful reading of The New York Times? Actually, can a priest or religious, as hard as they might try, ever be worldly?

In the Dec. 11, 2000, issue of The New Yorker, James Wood offered a review of J. F. Powers’ oeuvre, which had just been republished by The New York Review of Books. He begins his review with a question akin—I think—to the series of questions offered above. Wood writes, “Does anyone really like priests?” Wood’s question is excellent. It seems that if J. F. Powers—the author of the Catholic Book Club’s April selection—did not like priests, he certainly knew priests and religious well. He wrote constantly about them. However, Powers seems to advert to different questions about priests. His writing seems to ask: What makes a priest “normal,” “successful” or “holy” in the eyes of those with whom he interacts? Even if a priest is deemed normal, successful or holy, is he truly likeable? Is he human? Or, is he, in fact, consigned to an unnatural, almost crushing solitude?

As J. Greg Phelan cites in his review of a collection of Powers’ letters published by FSG last fall, the Timesmarked J. F. Powers’ obituary with the headline: “J. F. Powers, 81, Dies; Wrote about Priests.” (The epistolary collection is called Suitable Accommodations—there is a wonderful interview of the book’s editor, Katherine Powers, a former contributor to the Boston Globe, here. Indeed, throughout his writing, J. F. Powers thoughtfully considered the complexities of the priesthood and consecrated life. His works are not pious. His writing is precise and beautiful, never saccharine or pompous, and Powers’ stories insightfully depict an abnormal life—a liminal, priestly life lived at the crossroads of sin and the sacred, culture and the Gospel. Ultimately, Powers intuits that few priests are truly liked; few priests are resolutely holy; many are sincere; but none are worldly—though many may appear urbane.

When James Farl Powers died on June 12, 1999, his novels and short story collections were out of print. Yet, his novel, Morte D’Urban, won the national book award in 1963. The Book Club has selected Morte D’Urban in order to reconsider a classic that has been admired by many (Joseph Bottum; Philip Roth; Donna Tartt; and Elizabeth Hardwick). Morte D’Urban is unique in its wit and its knowledge of the inside baseball of rectories and religious institutes. Its protagonist, Fr. Urban Roche, belongs to a wholly mediocre religious order named the Clementines: “The Clementines were unique in that they were noted for nothing at all. They were in bad shape all over the world” (15).

Fr. Urban—who has traveled out of Chicago for some time giving parish retreats and fundraising—is one of the order’s best men. He is clearly urbane, charming and intelligent. Those who interact with him are drawn to him. At the start of the novel, Fr. Urban is sent to a bleak retreat house somewhere in rural Minnesota. His superior there is intolerably overbearing and bumbling, but Fr. Urban accepts his exile. He knows his own talents, and he is painfully aware of the deficit of intelligence and ability in his fellow Clementines and among the diocesan priests that shepherd the local church in Minnesota. When he is given a chance to succeed, Fr. Urban does; however, as he inevitably succeeds, he is inevitably undermined by the ignorance or the ambition of another who is supposedly working for the same goal: the growth of the church. Benefactors and acquaintances also shed him when he demonstrates some basic principles. Urban is hit twice in the head with inanimate objects, and he twice is baptized—adult baptisms—in cold Minnesota lakes during the course of a twelve hour period. He emerges from the two immersions more alert to his own fragility and more tolerant of the overwhelming mediocrity of the men that surround him.

Morte D’Urban is subtle and comic. There is no lascivious behavior. There are no unspeakable sins—just sloth, cruelty, ambition and pride. Indeed, the novel is quaint, but there is depth to Powers’ presentation of Urban’s struggles and transformation. As urbane as Fr. Urban understands himself to be, he comes to realize that the world and the people that populate it are far more complicated than the sliver of complexity that Fr. Urban prides himself on being attuned to. There is a fantastic exchange toward the end of the novel. The daughter of a wealthy benefactor challenges Urban:

[The benefactor’s daughter, Sally]: “Has it occurred to you that people might be disappointed by you and your reasons, and even more by you?”
“I am not sure what you mean,” said Fr. Urban.
“I mean you’re an operator—a trained operator like Mrs. Leeson, and an operator in your heart—and I don’t think you have a friend in the world.”
Fr. Urban smiled. “Now you have gone too far.”
“Name one.”
Fr. Urban was silent, thinking was there no one he could call his friend? Father Louis? Jack? Monsignor Renton? They were the best he could do, and he could not call one of them his friend – not as Sally was using the word. They all had their shortcomings, though perhaps, as Sally said, the trouble was really in him. He held them off. However, in view of the warnings in Scripture against allowing terrestrial relationships to interfere with one’s apostolic work, he wondered if he might not be justified – in not having a friend in the world? “You may be right,” he said. “The truth is I’ve traveled too much and been too busy, to maintain the kind of friendship you’re talking about” (301).

As many Catholic writers and essayists have discussed in these pages and elsewhere, there is widespread lament about the dearth of contemporary Catholic novelists and artists. There is much debate as to why that is. I have chosen J. F. Powers’ novel for the April selection 51 years after it was published because I see in his writing a remedy to our current predicament. Though J. F. Powers was Catholic and wrote thoughtfully about priests, he is usually left off the list of American Catholic literary heavyweights. Thomas Merton is much more well-known than Powers, though Merton produced spiritual writing, poetry and memoir. J. F. Powers’ writing is pristine. His critique of the church he loved is subtle and comic. He does not flay open the interior lives of his characters so as to plunge his readers into their great murky depths, but he offers portraits of authenticity—accessible, meaningful and vivid. As James Wood writes,

For despite Powers’ Christian faith, and despite the severity of his disappointment with the Catholic Church [perhaps overstated here by Wood], his writing, in its human irony, tends toward an unwitting inversion of Christianity, whereby his characters are not punished but already forgiven for sins they do not repent of, and the dry ground of their souls is moistened by the author’s gentle laughter.

One should let Wood know that this is indeed Christianity—not its inversion. Powers’ characters convey authenticity without paroxysm. They inhabit a world embraced by a merciful God and made holy by the Incarnation. Powers offers humor with hope.

Lastly, I offer a brief exchange that Donna Tartt records at the end of her review of Power’s work. Tartt shares that a woman religious interviewed Powers for the American Benedictine Review (Powers spent many years teaching at St. John’s Collegeville). Tartt writes:

Powers was asked if he had any ideas about the special vocation of the Catholic fiction writer. He replied: “No, I’m afraid I don’t, Sister, except that obviously he should not write junk.”

Powers generated beautiful prose about the American church he loved. I urge those familiar with the Catholic Book Club to give Morte D’Urban a read. Your heart will be warmed.

Please contribute to discussion once you have spent some time with the book. I would like to know what you think. To initiate discussion, I offer some questions; address them as you see fit.

1. What do you think of the claustrophobic priestly politics depicted by Powers? Is it stifling or comical or something else?

3. How has Fr. Urban been transformed at the end of the novel?

I invite you to post your comments and questions below. I will respond later this month.

I was not at all familiar with J. F. Powers but reading Mort d’Urban left me wanting to get to know him better. Thanks, Father Spinale.
I think this is a more complex story than the easy read suggests at first. Way too much for me to digest even over the next several months. But here’s what I’m starting with:
Father Urban is an immensely gifted individual. You might even say he’s sinfully gifted because he’s also a supreme snob and “operator” confusing sophistication with excellence. He’s determined to attract a “better type” to his undistinguished order. It seemed all but inevitable to me that over-confidence in his ability to play the mixed motives of “lesser” souls would be his undoing.
Still, I was hoping to see him emerge from his physical and spiritual dark night a wiser and more humble man. I was hoping to see him ready to put his gifts to work again--this time to fire up imagination and creative energy among his stuffy brothers. Father Placidus had done this for him long ago and his fellow Clementines must have thought he could do it for them. They elected him Father Provincial.
I was disappointed that Powers leaves little room for this hope at the end. His final chapter is called Dirge! Urban’s physical healing seems unlikely. Wracked with pain, he hasn’t been left in peace to figure out that humble isn’t the same thing as mediocre any more than urbane is the same as excellence. And what incentive is there, anyway, when the good work of dedicated and creative religious may be expropriated, undermined or censored by cavalier (not to say spiteful) hierarchy?
I wonder what other readers’ thoughts are about why, when all was said and done, Father Urban came to think of the Hill as home. And why did he send Father Louis there for a second stint?