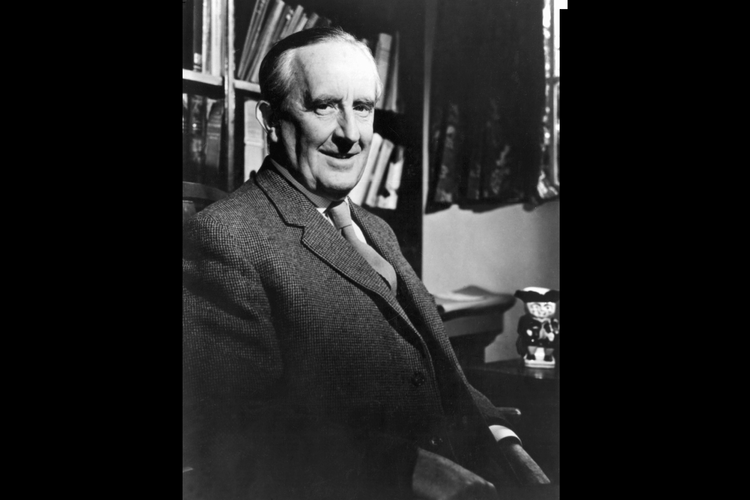 Last Friday, Sept. 2, was the 49th anniversary of the death of J.R.R. Tolkien at the age of 81. By coincidence, this past weekend also marked the release of the first two episodes of a Tolkien-inspired TV series, “The Rings of Power” (the episodes are reviewed here by America’s Jim McDermott, S.J.). Though not adapted from Tolkien’s writings in any strict sense, the series takes place in the fantasy world of Middle-earth in which his famous novels The Hobbit and the three Lord of the Rings books were set, and is imagined as a prequel to those storylines.

Father McDermott found much to like, but not everyone was pleased by the new series, either because it lacked the memorable characters and storylines of Tolkien’s other works or because the creators dared to depict hobbits as something other than lily-white (I’m not making this up) or because it was not slavishly faithful to the fantasy world Tolkien created. And if Elon Musk is to be believed, J.R.R. Tolkien “is turning in his grave” because of the way male characters are portrayed in “The Rings of Power.” Why so much Sturm und Drang over a TV show?

Because if you like J.R.R. Tolkien’s writings, you love J.R.R. Tolkien’s writings. And you have opinions. His fans exemplify the etymology of the word: fanaticus (usually more in the “zealous, affected by enthusiasm” than “insane, enthusiastic, inspired by a god,” but not always). These are the folks who learn Elvish, who name their kids Bilbo or Gandalf or Galadriel. A professor in graduate school once caught me scrolling online in class; after a moment’s wrath, he admitted that when he was in school, he occupied himself during many a boring lecture by writing out the genealogies of the kings of Middle-earth. That’s a fan.

Tolkien himself was as fascinating as the tales he wrought, a linguistic genius who spoke or read upwards of 30 languages (and invented several more), who fought in the trenches in World War I but also translated the Book of Jonah for the New Jerusalem Bible. A university professor for decades, he was a key member of “The Inklings,” an informal literary club that included C.S. Lewis and Charles Williams and met weekly from roughly 1933 through 1949 to discuss each other’s work. C.S. Lewis gave Tolkien credit for leading him to Christianity.

“They were not especially well-traveled or urbane. They came from ordinary middle-class families. Except perhaps for Williams, none was particularly known for personal charisma,” wrote Rachel Lu of the Inklings recently in America. “On some level, the Inklings were just a clique of fusty old English intellectuals, possessed of none of the savvy instincts that we associate today with ‘influencers.’” But “somehow these men transcended their own times and circumstances, translating Christian ideas into a language that everyone wanted to hear.”

"The Inklings, it seemed, even in death could still excite strong feelings, producing angry critics as well as devoted admirers."

Writing in America in 1981, Albert F. Reddy, S.J., noted that there was always a stratum of British literary society that disdained the Inklings. Humphrey Carpenter had published a study of the group, The Inklings, in 1978, and at the time Father Reddy “was surprised by the critics chosen by The Sunday Times and The Observer to review it. Neither John Carey nor Philip Toynbee made the least effort to conceal his dislike for the group…The Inklings, it seemed, even in death could still excite strong feelings, producing angry critics as well as devoted admirers.”

Both Lu and Reddy delve into a central element of Tolkien’s life that may have contributed to a certain suspicion of him among the literati: his Catholic faith. In his collected letters (published in 1981), Tolkien wrote repeatedly of his devotion to the Blessed Sacrament, the importance of prayer (including prayers of lament) and the connection between his faith and his fiction. In a letter to a Jesuit friend, Tolkien noted that “The Lord of the Rings is of course a fundamentally religious and Catholic work; unconsciously so at first, but consciously in the revision. That is why I have not put in, or have cut out, practically all references to anything like ‘religion,’ to cults or practices, in the imaginary world. For the religious element is absorbed into the story and the symbolism.”

Tolkien always had a largely pessimistic view of the world—perhaps both because of his experiences in the trenches and because he lost both parents in childhood—but he saw that tendency as of a piece with his faith, rather than contrary to it. In his review of The Inklings in America, Father Reddy noted “Tolkien’s passion for perfection, which prevented him from publishing more than he did, along with his good-naturedness, his sense of fun, his love of nature and his dedication to his family.” However, he noted, the book “also presents a man whose view of life was deeply pessimistic (as a boy he lost both his parents) and who suffered recurring periods of depression.”

Tolkien himself admitted as much. In a 2020 article for America, Jessica Hooten Wilson noted that “Tolkien himself did not see history as a series of worldly victories.” She quotes one of his letters to this effect:

Actually I am a Christian and indeed a Roman Catholic, so that I do not expect ‘history’ to be anything but a ‘long defeat’—though it contains…some samples or glimpses of final victory.

Readers of The Lord of the Rings will certainly recognize all those themes: the miraculous Lembas bread that keeps Frodo and Samwise alive on their journey; the sense of the world inevitably devolving into a slaughter of innocents; the frailty of Frodo in the crucial moments before the final victory over evil. Tolkien’s fantasy world was in many ways a direct reflection of his understanding of reality.

Amazon executives might not care about all that, but they had plenty of other reasons to greenlight “The Rings of Power.” Between them, The Hobbit, The Lord of the Rings books and The Silmarillion have sold more than 600 million copies; in theaters, “The Hobbit” and “The Lord of the Rings” movies have together grossed more than $2 billion. There’s a lot of fans out there—including Pope Francis.

A final coda: Devotees of the Traditional Latin Mass might enjoy a tidbit from a 2003 article by Tolkien’s grandson Simon. It seems that Tolkien, like Evelyn Waugh and Graham Greene, wasn’t a big fan of the liturgical reforms that followed the Second Vatican Council:

He was a devout Roman Catholic and it was soon after the Church had changed the liturgy from Latin to English. My Grandfather obviously didn’t agree with this and made all the responses very loudly in Latin while the rest of the congregation answered in English. I found the whole experience quite excruciating, but My Grandfather was oblivious.

J.R.R. Tolkien: "I do not expect ‘history’ to be anything but a ‘long defeat’—though it contains…some samples or glimpses of final victory."

Our poetry selection for this week is “Four Freedoms” by Carolyn Oliver. Readers can view all of America’s published poems here.