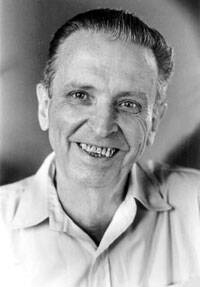 Many of us, entering the St. John’s Abbey church for the funeral Mass of J. F. Powers, who died on June 12, were surprised to find him absent. He had been buried earlier at a graveside service in the St. John’s cemetery. But why were we surprised? Jim Powers, whose peerless first novel, Morte d’Urban, won the National Book Award in 1963, was the most elusive man we knew. Since the death eleven years ago of his wife, Betty, he seemed like a man adrift, a solitary soul who cared nothing for convention and seemed to care even less for public opinion.

Had he cared for public opinion, would he have dawdled over his writing as he did? Would he have let 25 years go by between novels? And wouldn’t he have put on a friendlier face? Striding across campus to the post office each day, he was a tall, imperious figure, with his eyes invariably on the ground, an expression of defiance drawn tightly on his face. Once you broke through the stern facade, however, you found behind it a warm and spirited conversationalist. Some said the facade was there to protect his privacy, for he was composing fiction in his head. I think it was simpler than that. I think he was shy.

Jim Powers, whose peerless first novel, Morte d’Urban, won the National Book Award in 1963, was the most elusive man we knew.

J. F. Powers was perhaps the best known "Catholic" writer at midcentury, having made his reputation with two story collections, The Prince of Darkness in the late 1940’s and The Presence of Grace in the mid-1950’s. A third story collection, Look How the Fish Live, was published in 1970. His favorite subject from the beginning to the end of his career was the Catholic priesthood.

His brother-in-law, the Rev. Thomas Wahl, a monk of the abbey, said the memorial Mass, as he had done for his sister Betty eleven years earlier. On that earlier occasion he had read from, and commented on, the let­ters she had sent him over the years. This time he lost, somewhere between the sacristy and the altar, the homily he’d prepared. He apologized, gathered his thoughts, and delivered an eloquent eulogy, describing, for one thing, Jim’s frustrations as a novelist. ­

Which prompted me to recall several of Jim’s remarks about the chore of writing. On revising: "I know a page is satisfactory when it doesn’t make me throw up any more." Asked what time of day he did his best work, he replied, "Never." He considered himself a short story writer at heart, and claimed that his publishers, after two story collections, more or less forced him into the novel. Someone who had heard him read the first chapter of­ his second novel, Wheat That Springeth Green, asked him whether a certain element at the beginning would appear again later in the book. "No, I’m really not a novelist." he said. "I don’t chew over things I’ve already chewed."

After Wheat was published in 1988, I saw him in the library day after day searching for reviews. There were many, and all were favorable, for critics were treating him like a long-forgotten artifact. Some admitted they thought he was dead. Twenty years earlier he had been deeply wounded by Roger Sale’s review of Look How the Fish Live, his third story collection. The review began, "The heart of J. F. Powers, never large, seems to have shrunk," prompting Powers to remark, "Once you get knocked out of the ring it takes courage to climb back in." All of which proves that if public opinion meant little to him as a man, it meant a great deal to him as a writer.

J. F. Powers on revising his own writing: "I know a page is satisfactory when it doesn’t make me throw up any more."

Fr. Thomas went on to describe Jim’s reactionary opinions about the present-day church. He pointed to the place at the center of the vast (and acoustically troubled) balcony where we were used to seeing Jim sitting during Sunday Mass. "When I asked him why he preferred that spot," said Fr. Thomas, "he told me, ’It’s the one place in the whole church where I can’t hear anything."

I recalled a conversation about the church’s teaching on children some years earlier. "Betty and I weren’t meant to have children," I was told by Jim, father of five. "Our mistake was getting mixed up in that Catholic business called Family Life years ago. That was for farmers, not for us, but we didn’t know any better."

Betty chuckled, listening to this. I asked her, "Do you agree with him?" She merely chuckled some more.

Jim said, "She knows it’s true but she won’t admit it. She tells herself it was good for us to have children, but it really wasn’t her calling. It’s like trying to run the hurdles all your life and discovering too late your talent was for the breaststroke."

Jim’s will specified that there be no music at this Mass except the lovely hymn "Wheat That Springeth Green," which we sang after the homily.

We weren’t a great crowd of mourners, something less than 150 in number: relatives, teaching colleagues, former students, a few monks, several sisters from the nearby Monastery of St. Benedict and a couple of celebrities—Garrison Keillor and Eugene McCarthy. Filing outside after Mass, we stood around in the June sunshine shaking hands, which, out of respect for Jim’s disdain for the practice, we’d been asked to refrain from doing before Communion. It occurred to me that with the death of J. F. Powers, St. John’s, the center of liturgical renewal, may have lost its last holdout against change. Certainly it lost its most interesting character and best writer.

Leaving campus, I drove past the cemetery where, without waiting for our blessing, Jim had at last joined Betty, whose grave he had visited almost daily for the past eleven years.

Jon Hassler was the author of The Dean's List, North of Hope, and several other novels. He died earlier this year.