Review: What would the great silent film clown Buster Keaton make of the smartphone era? 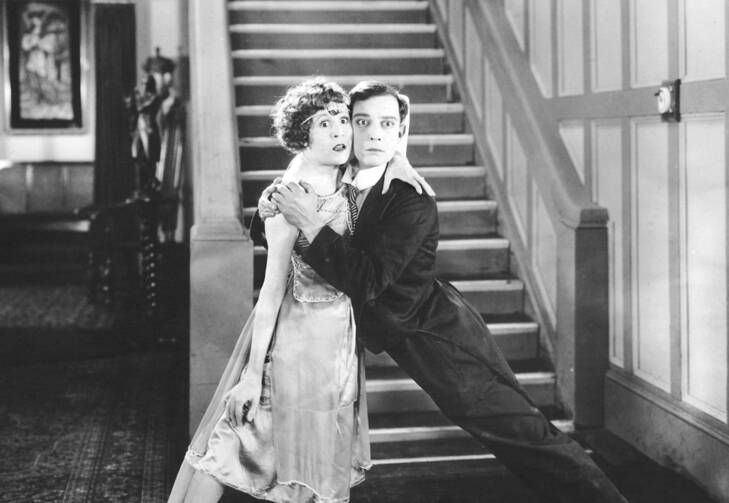 Virginia Fox and Buster Keaton prop each other up in "The Electric House" (1922). (Wikimedia Commons)

When I attended film school some decades ago, our first class required us young would-be Spielbergs to make five silent short films before we could graduate to longer subjects and dialogue. This wasn’t simply intended as an exercise in self-imposed constraints or as a replay of film history, in which silent films ruled for nearly two decades before being overthrown by talkies. It was instead a crucial lesson in the essence of movies, known in their earliest days as “moving pictures.” Image and motion were the medium’s superpowers, and learning to harness those forces—to tell a story entirely with action—was properly the first step in the curriculum.

In her elegant new book, Camera Man: Buster Keaton, the Dawn of Cinema, and the Invention of the Twentieth Century, the critic Dana Stevens uses the biography of the great silent film clown as a lens to explore the early days of movies, the cultural forces that gave them birth and the social upheavals they in turn engendered. The book is all the more remarkable a feat for reading all this through the most taciturn and unforthcoming of movie stars, whose golden period, 1920 to 1928, was a mere fraction of an otherwise checkered showbiz career and whose persona—indelibly labeled “the Great Stone Face” by the critic James Agee—was an unshakably blank expression while the chaotic world whirled around him.

To render a life of speechless action in words, let alone to interpret its larger significance, demands a full arsenal of critical and historical tools.

It is precisely this latter quality that makes Keaton an ideal figure through which to consider a medium whose native strengths are visual and kinetic. But to render a life of speechless action in words, let alone to interpret its larger significance, demands a full arsenal of critical and historical tools. Luckily, Stevens has these in abundance and is able to move deftly from reportage to analysis and from seeming digressions to larger insights. She ably toggles between giving us a sense of life a century ago, using primary sources to paint eye-opening pictures of vanished worlds and customs, and weighing these with the hindsight of contemporary criticism.

For instance, vivid early chapters on Keaton’s extraordinary childhood as a traveling vaudeville performer place the book in the context not only of a vanished entertainment world but also of the era’s progressive child welfare movement—a mixed blessing, in Stevens’s telling, in that while it curbed labor abuses in many fields, it also fueled an all-too-familiar moral panic around a whole sector of “disreputable” entertainment work.

Child safety advocates had some cause for concern in Keaton’s case. His specialty, as part of an act with his parents, was to be throttled and thrown all over the stage by his father. The laughs reportedly emerged in response to the little fellow’s unflappable response to these torments, though one might imagine it was often the laughter of relief. This introduces one of the book’s main threads: that Keaton’s work drew its true power from danger as much as from comedy. As Stevens writes, “The Keatons were not just funny, they were thrilling, with real-time risk an essential element of the program.”

Where do you locate the physical comedy in a population hunched over smartphones?

This would become the enduring throughline of Keaton’s work and, to my eyes, his chief film legacy. For all his inarguable greatness as a comedian, to watch many of his silent classics now—from the house-assembly how-not-to “One Week” to the breathtaking hurricane that concludes “Steamboat Bill, Jr.”—is to see a genius stuntman and architect of mayhem. Having learned his craft onstage with little more than a table and a few props, he used the new medium of film as the pretext to build large-scale playgrounds for increasingly elaborate capers.

Every time I watch “The General,” the 1926 masterpiece in which Keaton single-handedly commandeers a Civil War-era train, I can’t help but think of “Speed,” the 1994 action film whose preposterous premise—the bus can’t stop or it will explode—is something a latter-day Keaton might have dreamt up. Keaton’s true heirs, it seems to me, are action film directors and stars like Jackie Chan or Dwayne Johnson more than comics like Jim Carrey or Bill Irwin.

‘The Birth of a Nation’ sparked decades of racial violence. This Jesuit understood its unholy power.
Stephen Werner

Director Mike Nichols told beloved stories onscreen. His own life was a story of resilience and transcendence.
Rob Weinert-Kendt

Of course, the chasing of dangerous thrills and the primacy of images over words are not unalloyed cultural goods. The logical conclusion of these tendencies, uncritically indulged, are YouTube pranksters and first-person-shooter video games. Stevens makes a familiar point about how the often hostile, challenging world depicted in Keaton’s best films bespeaks a worldview skeptical about meaning. “The universe his films posit, however playful and imaginative, is also frighteningly unstable,” she writes.

But at least Keaton’s imagined settings referred to a recognizable world of real physical things. A century later, we have gone through the looking-glass into a world mediated by memes and avatars. Where do you locate the physical comedy in a population hunched over smartphones?

Even as I write this, I can picture what Keaton might have made of it. Imagine a subway car, say, full of folks with eyes locked on their phones, lurching in lockstep with every bump on the track, their placid expressions unchanged. Perhaps a single stone face stares plaintively back at us, in the deadpan mockumentary style of “The Office,” as if to say, “Can you believe this?!”

Perhaps the visual language Keaton helped to create isn’t so worn out after all.

This article also appeared in print, under the headline “Film’s Architect of Mayhem,” in the Spring Literary Review 2022, issue.