Review: Sally Rooney writes for millennials in a post-Catholic world 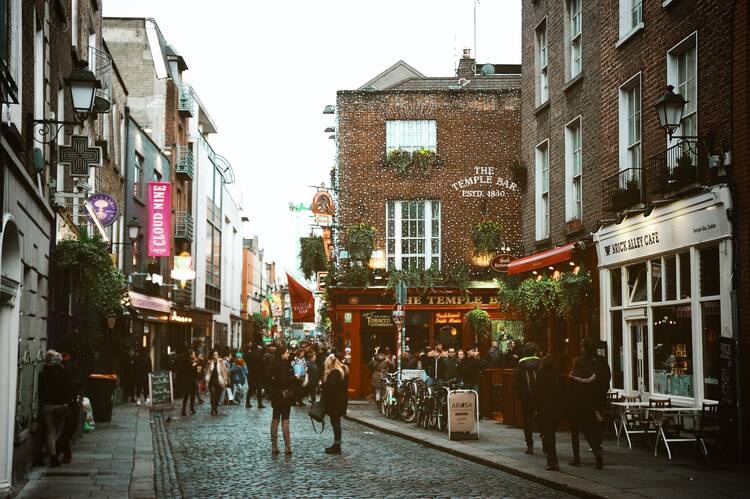 ​Sally Rooney has a particular style of writing. If you have read one of her books, her others will feel familiar—almost to a fault. Like herself, Rooney’s characters are young Irish intellectuals, usually writers. In Dublin, they write slam poetry, short stories, literary reviews and popular novels. They are smart and self-aware, cynical and searching. In her pages, they type and think and talk about capitalism, climate change, beauty, sex, God and general systems collapse, all without quotation marks. Her primary narrative concern is how her characters navigate their relationships in a time of historical crisis.

“How’s the book?” a dear friend texted me, knowing I had an advance reader’s copy of Rooney’s new novel Beautiful World, Where Are You. “I’m only 40 pages in. It’s similar to her other ones,” I responded, “good in a familiar way.”

There comes a point in each of her novels, usually about 100 pages in, where I find myself falling in love. This time,I can pinpoint that moment to Page 117 exactly—the point when I put my book down to text my friend. Two of the characters find themselves attending the 9:00 a.m. Mass at the “Church of Mary Immaculate, Refuge of Sinners” after spending the night together. These alienated, anxious characters find a moment of peace together in the pews. For at least a bit, their restless relationship is filled with grace.

Beautiful World, Where Are You revolves around four characters: Alice, Felix, Simon and Eileen. It is hard to resist visualizing their names emblazoned in white Helvetica stacked vertically on a plain black T-shirt. Around 30 years old, these four are slightly older than Frances and Bobbi from Rooney’s Conversations With Friends or Connell and Marianne from her Normal People. In chapters with alternating formats, we watch in splendid detail from a third-person perspective before Rooney switches to giving us Alice and Eileen’s emails in epistolary form. These exchanges are filled with the sharp social commentary to which we have grown accustomed in Rooney’s writing.

Alice, a best-selling novelist contending with early-onset celebrity, retreats to a coastal town in the west of Ireland after a nervous breakdown. There she matches with Felix, a local warehouse worker, on Tinder. She invites him to join her on a press trip to Rome. Back in Dublin, Alice’s best (and, well, really only) friend from college, Eileen, adds periods to the name “WH Auden,” standardizing its appearance in the little-read literary magazine she edits. Eileen lies in bed at night thinking about Simon, the boy with seizures who grew up next door, five years her senior. Simon, a practicing Catholic, now works as a policy advisor for a left-wing parliamentary group.

Catholicism, while present in her first two novels, moves from the fringes to the center of this text. Felix, after learning of Simon’s faith and religiosity, asks Alice, “He’s weird in the head or something is he?” Lola, Eileen’s difficult older sister, insists he must be a freak.

Rooney is writing within the context of a post-Catholic Ireland. She and her characters grew up in a world where the church’s firm grasp on every aspect of life rapidly weakened after revelations of physical and sexual abuse. “We got rid of the Catholic Church and replaced it with predatory capitalism,” Rooney told The Irish Times in 2017. “In some ways that was a good trade off, and in other ways, really bad.” She writes for an audience that lacks faith in an institutional church, yet yearns for something to believe in. She writes for me and my friends.

Sally Rooney writes for an audience that lacks faith in an institutional church, yet yearns for something to believe in. She writes for me and my friends.

As Alice—and I—understand Catholic doctrine, “beauty, truth and goodness are properties of being which are one with God.” Throughout the novel, Alice and Eileen are gradually opened to the idea that there might be something special about a first-century Judean preacher in their search for a beautiful world. In an email to Alice, Eileen describes Mass as “strangely romantic.”

If I had gone straight home this morning instead of going with him to the church, I’m not sure I would feel the same way now—but at the same time, if we had just gone to Mass this morning and we hadn’t slept together last night, I don’t think I’d feel like this now either.

She wonders if she grew to admire the sincerity of Simon’s faith while watching him receive Communion among the little old ladies.

If the goal of art from the Catholic perspective is to reveal beauty, truth and light—to point in the direction of God—then Sally Rooney is my generation’s great Catholic writer.

As usual, Rooney is at her best when she leans into the corporeality of her imagination. Her writing in this novel is most compelling when describing capitalism’s effect on the body. In a moment of vulnerability, Felix explains to Alice how he struggles to understand that the hands he uses at work can be the same hands he uses in bed:

It’s hard to believe I have to use the same body for both things, I’ll say it like that. And it doesn’t feel like the same. These hands touching you now, I use them to pack boxes? I don’t know. At work my hands are f—ing freezing all the time. And like, basically numb. Even if you wear gloves they go numb eventually, everyone says that. Sometimes I’ll get a little cut or scrape or something and I won’t notice until I see it’s bleeding. And these are the same hands touching you?

Working in the warehouse, Felix disassociates his body from his personhood. The effects of late-stage capitalism on the individual are isolation and despair. Felix feels this through his body.

What does Rooney present as the alternative? Love. It is an idea her characters may have picked up on while in Rome. Beautiful World, Where Are You reads like a sexy, millennial novelization of Pope Francis’ “Fratelli Tutti.” Francis writes what could be a thesis statement for this novel in that encyclical: “Authentic and mature love and true friendship can only take root in hearts open to growth through relationships with others.”

If the goal of art from the Catholic perspective is to reveal beauty, truth and light—to point in the direction of God—then Sally Rooney is my generation’s great Catholic writer.

Ciaran Freeman is an art teacher at Gonzaga College High School in Washington, D.C., and a former O’Hare Fellow at America Media.