The grace of a good priest: Neil Connolly and the South Bronx’s resurrection story 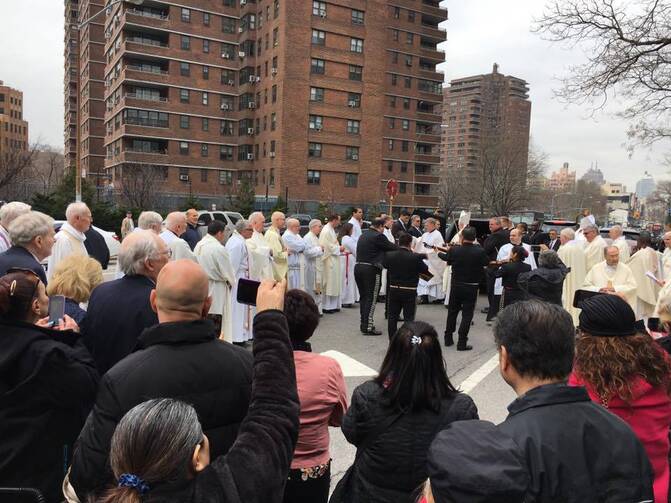 In The Kingdom Began in Puerto Rico: Neil Connolly’s Priesthood in the South Bronx, Angel Garcia tells the story of a man growing into his vocation as he explores what role there is for a priest in the church, among believers and in the world. Based on a series of long interviews the author conducted with the Rev. Neil Connolly before the priest’s 2017 death, the book is bolstered by contextual reporting. Like the Bronx, like the church, this story is at times heartwarming, at times tragic.

The Kingdom Began follows Connolly in the South Bronx during the years those neighborhoods were being destroyed by racist public policy: the effects of redlining, urban renewal and the austerity politics of New York’s fiscal crisis. Forty percent of buildings in the South Bronx were burned or abandoned in the 1970s. Two hundred thousand people fled the borough in that decade as the place became a code word for blight and ruin. The church stayed.

Garcia reveals Connolly as a man with an unusual capacity to share, not hoard, power and with a deep faith in his parishioners, who carried their faith from the mountains of Puerto Rico to the streets of the Bronx, making a new church. In those dark years, Bronxites built community organizations that stemmed the tide of neighborhood destruction and laid the groundwork for the borough’s recovery. The Kingdom Began is one history of that period, told through the life of an Irish American priest who staked his loyalty across racial and ethnic lines.

Outsiders tend to get the CliffsNotes version of the South Bronx: the 1977 World Series, “Fort Apache: The Bronx,” sad pictures of broken buildings; and then 30 years later, New York Times articles about luxury high-rises. The real story played out in parish halls and crowded lobbies as people saw Christ beside them in their unheated apartments and found power in what they could do together. Mirroring methods then ascendant in Latin America, Connolly established base Christian communities, put lay and religious women in positions of authority and launched a pastoral training center that brought people from around the archdiocese to the south Bronx to learn how faith could be harnessed to action.

The die was cast early for Connolly. In the late 1950s, he spent summers in Puerto Rico at the Institute for Intercultural Communication, a project of the radical education theorist Ivan Illich and the pioneering sociologist Joseph Fitzpatrick, S.J., that was designed to immerse seminarians in rural Puerto Rican communities so they would learn Spanish and understand the parishioners they would serve back in New York. It worked. By the 1970s, graduates of the Institute formed the backbone of the community organizations responding to the crisis in the Bronx. Connolly helped establish one of these: South Bronx People for Change.

In 1979, the group ran the South Bronx Via Cruz, a daylong march that named as Christ’s tortures the neighborhood crises of absent landlords, recalcitrant city officials, addiction and crime. By the last station, more than 1,000 people had joined the procession. It was just one of a decade of actions. In the years when “the Bronx was burning,” the people who lived there ran study sessions, sat in at city offices and testified at city hall to demand housing code enforcement and fire inspectors, youth programs and eventually a massive investment in publicly financed affordable housing that, in time, rebuilt shattered neighborhoods.

In the end, the survival and recovery of the Bronx is a resurrection story—a tale of the people rising. But that is rarely the story that gets told. Instead, everybody has a story of a Bronx mugging. While true enough, those stories serve a lie. They are sleights of hand to distract from the real crime: the destruction of a community, decade after decade, through conscious public policy decisions predicated on racism.

The federal government determined in 1938 that the South Bronx would fail when it drew redlining maps around the neighborhoods, marking them unsafe for investment due to infiltration by Puerto Ricans and African Americans. “Infiltration” is the word on the government documents. Linked federal policies built the highways and subsidized the growth of the suburbs to which white Bronxites would later flee as, starved of investment, their Bronx neighborhoods declined. Because of racist banking practices, their Puerto Rican and Black neighbors could not get mortgages in those suburbs.

As conditions in the South Bronx worsened and poor people displaced from other parts of the city and from their native Puerto Rico crowded into aging buildings, New York City closed firehouses. Wall Street demanded smaller city budgets, and the government complied. A dismaying but predictable wave of fire and trauma followed. By the late 1970s, the department of city planning spoke openly of “planned shrinkage,” a policy of pulling back city services from “blighted” neighborhoods. Garcia deftly leads readers through these issues as Connolly and his community grapple with them.

Garcia does great work sketching out the history of America’s oldest colony, explaining the economic forces that pushed Puerto Ricans to the United States and recounting the communal, heavily lay Catholicism they brought with them. The reader moves with Connolly as he “goes Spanish,” in the words of Garcia. The term referred to the ethnic turnover of parishes as Irish, Italian and other whites fled the borough and were replaced by Spanish-speaking parishioners, but Connolly also uses the term for himself as he stakes his loyalty with his parishioners. A deeper exploration by the Puerto Rican author of the meaning of an Irish American identified so thoroughly with the people he served would have been valuable.

Connolly’s efforts were directed both inside and outside the church. He worked with other priests to establish a priests’ council, akin to a union for parish priests, and argued that the archbishop be elected, not appointed. In 1984, when he learned that repairs to the archbishop’s residence on Fifth Avenue would cost more than $1,000,000, Connolly wrote to the incoming archbishop, John O’Connor, then bishop of Scranton, and suggested he instead live in a rectory in the South Bronx, the poorest part of the diocese. O’Connor didn’t reply.

Garcia’s lovingly told story reveals how much energy and hope was alive even—or maybe especially—in the depths of crisis. In contrast, O’Connor comes in like a cold wind. A military man who hears that the South Bronx vicariate is out of control, he is skeptical of Connolly, his panoply of initiatives and his insistence on lay empowerment. Within a year of O’Connor’s arrival, Connolly is reassigned out of the borough.

Student of the Laity: The priestly ministry of Neil Connolly
Matthew P. Moll

It is telling, and depressing, that the affordable housing system that South Bronx People for Change and a panoply of other groups pushed for eventually rebuilt the South Bronx—but the consultative systems between the hierarchy and priests and laity that Connolly advocated are dead. You can fight city hall. You can even fight the banks. But maybe you can’t fight the cathedral.

Connolly comes across as a deeply secure, self-knowledgeable and capable person, trying with resolve and creativity to fulfill his vocation. In our disgust with clericalism, the cover-ups of sex abuse and other crimes and failures of the hierarchy, in our frustration over the withholding of the sacrament of holy orders based on sex, in our debates over married clergy, we can forget what a tremendous grace a good priest is. Neil Connolly was a good priest. Presenté, Neil Connolly.

This article also appeared in print, under the headline “A People’s Priest,” in the Fall Literary Review 2021, issue.

Eileen Markey teaches journalism at Lehman College and is the editor of an anthology of the work of investigative reporter Wayne Barrett, 'Without Compromise: The Brave Journalism That First Exposed Donald Trump, Rudy Giuliani and the American Epidemic of Corruption.' (Bold Type Books/Hachette)