What has the Catholic Book Club been reading? 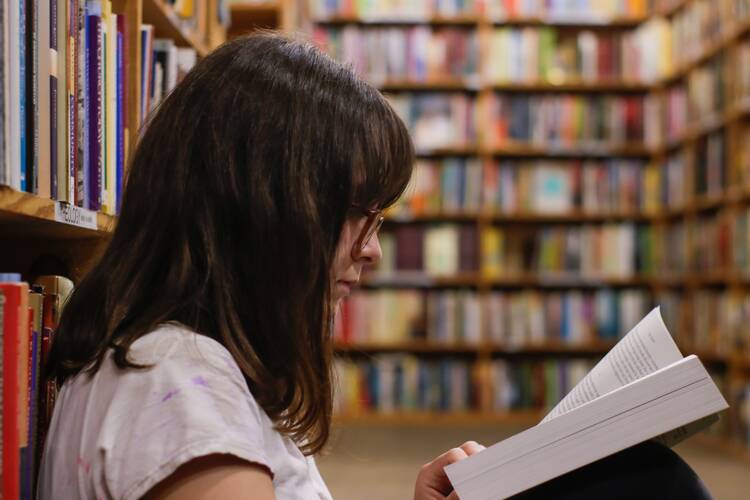 One of the advantages of belonging to a virtual book club rather than a real-life version is that it survives in a pandemic. In fact, in some ways our Catholic Book Club has thrived in the past year: Many of us found books to be valuable sources of nourishment during the time of Covid-19, and many of us also sought out community and companionship in virtual settings when in-person encounters became rare. Our online community on Facebook now has over 7,000 members, while our weekly newsletter reaches over 14,000 subscribers.

This Is Happinessby Niall Williams

We discussed two books over the past six months, each from a different genre and offering unique perspectives. (We try to rotate our selections among biography, fiction, nonfiction and poetry.) First we explored a brand-new literary/historical analysis by Peter Manseau, The Jefferson Bible; more recently we have been discussing a 2019 novel by Irish writer Niall Williams, This Is Happiness. Our Catholic Book Club moderator, Kevin Spinale, S.J., offered interpretive essays on both books and included questions for discussion. Our Facebook page continues to be the gathering place where our Catholic Book Club members discuss each book.

In the Catholic Book Club, we try to rotate our selections among biography, fiction, nonfiction and poetry.

In the King James Bible, the Gospel of John concludes with an observation that if everything Jesus did were recorded, “I suppose that even the world itself could not contain the books that should be written.” But even what was written down has produced its own cornucopia of books, as there are as many versions of the Bible under the sun as one could possibly imagine, for every genre and affinity group in all of Christianity, each with its own particular idiosyncrasies and emphases. One of the most unusual of these was the result of a quixotic project by the third president of the United States, Thomas Jefferson. Taking scalpel and glue to the text of numerous Bibles in his possession (in various languages), Jefferson cut-and-pasted his way to The Life and Morals of Jesus of Nazareth. “This one-off, hand-crafted book now has a book-length biography explaining its conception and construction, its discovery, its duplication and its reception history,” wrote Father Spinale. That book is The Jefferson Bible: A Biography, by Peter Manseau.

Jefferson’s final product, according to Manseau, was “made of twelve types of paper, ten varieties of ink (six in the printed matter and four in the handwritten notes), two adhesives, threading of both linen and silk, and goatskin leather.” Jefferson used his creation for his own personal devotional reading during the last six years of his life.

Among Jefferson’s particular bugaboos were Jesus’ miracles, which he thought distracted from the reality of Jesus as a great ethical teacher rather than a worker of wonders, so he cut them from the text. Unfortunately, as both Peter Manseau and Father Spinale note, the resulting figure is hardly a dynamic messiah (much less divine!). “Time and again, Jesus indicates that he might be able to perform a miracle of some kind, and then does nothing. While this no doubt made him more acceptable in Enlightenment circles, one imagines it would have made Jesus far less popular in Galilee,” Manseau writes. “[Jefferson] may have imagined his Life and Morals as scripture shorn of all its unreasonable elements, but Jefferson’s is a hard gospel. The blind do not see; the lame do not walk; the multitudes will remain hungry if loaves and fishes must be multiplied to feed them.”

Thomas Jefferson thought Jesus’ miracles distracted from the reality of Jesus as a great ethical teacher rather than a worker of wonders— so he cut them from the text.

Many of our members agreed. “The whole concept of cutting and pasting Scripture is hard to get my head around,” wrote Liz Latorre. “I definitely can think of some portions [of the Bible] I would like to cut, but I keep having this niggling thought in the back of my head that the parts I would want to cut probably have something in them that I actually need to hear—I just haven’t discerned what the message is.”

Another reader, Michael Shak, wondered if Jefferson was too stubbornly wedded to rationalist ideals to embrace a Jesus of miracles. “Jefferson’s deist prism, from which he looked out on the world, hamstrung him to reason but never opened him up to the God of Abraham—a God of faith,” he wrote. “Faith, while reasonable, opens a believer to the life of paradox, which Enlightenment thinkers like Jefferson revolted against because it didn’t fit into their system. Faith is iconoclastic.”

At the same time, some readers were surprised to find Jefferson himself a far more complex figure in Manseau’s telling than they had thought. In some ways, this book is as much a biography of Jefferson as a story of his take on Scripture. Manseau shows him to be a scholarly figure of great talents and also enormous flaws—and one with a rather unique take on Jesus of Nazareth.

"Jefferson’s deist prism, from which he looked out on the world, hamstrung him to reason but never opened him up to the God of Abraham."

In February we began discussion of our latest book, This Is Happiness, by Niall Williams. The novel is set in the west of Ireland just as the residents begin to catch up to the modern world; electricity and alarm clocks start to replace candles and church bells as the measures of time. A wild cast of characters occupies the small town of Faha, which at first seems like it should be a sleepy backwater but turns out to be rich with exuberant life. Williams presents the town’s colorful residents in intricate detail, and does the same for their physical and spiritual surroundings as well.

“Gleefulness. I want to assure you that Niall Williams’s This Is Happiness bestows on its readers a feeling of gleefulness,” wrote Father Spinale in his introductory essay. “‘Glee’ is a word I hardly use, but it is what I felt in reading nearly every paragraph in the novel.”

In This Is Happiness, a wild cast of characters occupies the small town of Faha, which at first seems like it should be a sleepy backwater but turns out to be rich with exuberant life.

Readers loved Williams’s prose, even when it occasionally crossed the line from lyrical into something more affected (and required dedication and concentration from all of us to hold on to the plot threads). “I found the meandering language very inviting. It took a while to figure out how to read the book: not hastily, but sitting down and entering into the landscape of character and place,” wrote Dorie Wessell Bliss. “It reminded me of reading a Wendell Berry novel: a different time, slowed down, rich with life.”

The Catholic Book Club: From ‘Catholic Modern’ to ‘Say Nothing’
Kevin Spinale

“I am reminded of the joy I experienced when reading Doig’s This House of Sky, or Frazier’s Cold Mountain, or McCourt’s Angela’s Ashes,” wrote David W. Madsen. “In fact, if reading this book were any more pleasurable, I’d have to give it up for Lent.”

“I cannot recommend this novel highly enough,” wrote Father Spinale. “The salt of the earth who are depicted in this novel are all light and glee for the soul.”

To offer the broadest possible range of quality books on topics of interest to our readers, we are always interested in suggestions for what to choose next. Are you interested in reading and discussing with us? Join the Catholic Book Club at americamagazine.org/catholic-book-club or on Facebook at facebook.com/groups/americacbc. Happy reading!

This article also appeared in print, under the headline “Rare Finds: The Treasures Found in Books,” in the Spring Literary Review 2021, issue.