Books beyond imagining: an introduction to America’s 2020 Fall literary issue 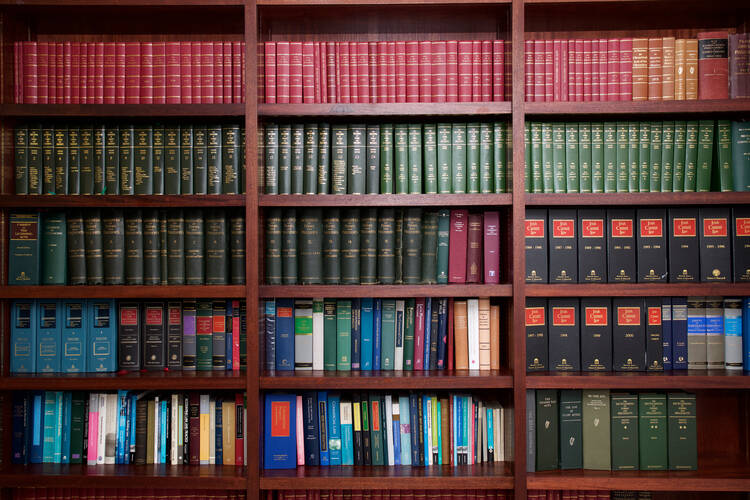 I spent much of my free time in the month of September preparing to move out of one New York City apartment into another. This inevitably meant getting out the tape measure and becoming more creative about storage options (the average one-bedroom apartment in my neighborhood is less than 500 square feet), but it also became an exercise in purging some prized possessions. Like many of us, I found my greatest enemy to be my closest friend: the books, the endless rows and stacks and unruly piles of books.

Have they been migrating south into my apartment for the winter? Are they breeding? Have they mastered parthenogenesis? Surely I did not buy all of these tomes, and surely I did not bring them all home from the office. But here they all are, and unless I can gin up some courage and ruthlessness, soon some movers will surely be giving me surly side-eye as they hump impossibly heavy boxes up and down the stairs.

Like many of us, I found my greatest enemy to be my closest friend: the books, the endless rows and stacks and unruly piles of books.

This Fall Books literary issue is not helping matters, because right from the get-go I realized it was imperative that I own the two books mentioned in our features: Luster, the dazzling debut novel by Raven Leilani, who is profiled here by a former Joseph A. O’Hare, S.J., fellow, Brandon Sanchez (he calls the novel “as clear as a pane of glass and as elaborate as a stained-glass window”), and John Berryman and Robert Giroux: A Publishing Friendship, by Patrick Samway, S.J., who recounts the fruitful collaboration between the famous poet and his erudite editor. But Berryman was not Giroux’s only noted author: As Samway notes, “Giroux became a consummate editor with a host of notable writers—including Djuna Barnes, E. M. Forster, William Gaddis, Herman Hesse, R. W. B. Lewis, Walker Percy, Carl Sandburg, William Saroyan, Mary Lee Settle, Isaac Bashevis Singer, Susan Sontag, Derek Walcott, Robert Penn Warren and Eudora Welty, to name but a few—all of whom he granted his full attention.”

The two most recent selections of the Catholic Book Club profiled within have likely long been on many of our shelves: John Kennedy Toole’s comic novel, A Confederacy of Dunces, and John Howard Griffin’s tale of artificially darkening his skin to try to understand what it was like to be a Black man in the American South in the 1950s, Black Like Me. As always, interpretive essays and challenging questions by C.B.C. moderator Kevin Spinale, S.J., helped drive our online discussion of both texts.

Several essays allow us to revisit past literary masters: Robert Rubsam on the literary corpus of Jean Giono, Eve Tushnet on the famous Parisian courtesan (and spiritual writer, of a sort) Liane de Pougy, and Mary Roche on Year of Wonders, a 2002 novel by Geraldine Brooks on a topic now familiar to all of us: a community’s response to a deadly pandemic.

There is much more: Franklin Freeman takes us into the life and fiction of Robert Stone in his review of Child of Light, a biography of Stone by Madison Smartt Bell; and Maureen H. O’Connell reviews Christopher Pramuk’s The Artist Alive: Explorations in Music, Art & Theology, in which Pramuk “translates stories germane to the human experience that illuminate paths to the transcendent when communicated through the arts.” Elizabeth Matthew explores some of the hidden cultural assumptions found in a new novel about Hillary Rodham Clinton (albeit a fictional character, who never marries Bill and runs against him for president), Rodham.

The two most recent selections of the Catholic Book Club profiled within have likely long been on many of our shelves: John Kennedy Toole’s A Confederacy of Dunces, and John Howard Griffin’s Black Like Me.

We also have a contribution from Jon Sweeney, who tackles a hefty new tome on Richard Wagner and his massive influence on Western culture by Alex Ross, Wagnerism.

In addition, we have two new poems selected by our poetry editor, Joseph Hoover, S.J.: “In Closing,” by Kevin Pitts, and “Fall Moon,” by Andrew Frisardi.

We hope you enjoy it all. We do these literary issues twice a year, and they always present us with fresh chances to introduce new authors—or revisit old ones.

We have also taken this issue to show our gratitude to our benefactors by mention of their many names in a special insert.

On second thought, I don’t need to get rid of these books in my apartment.