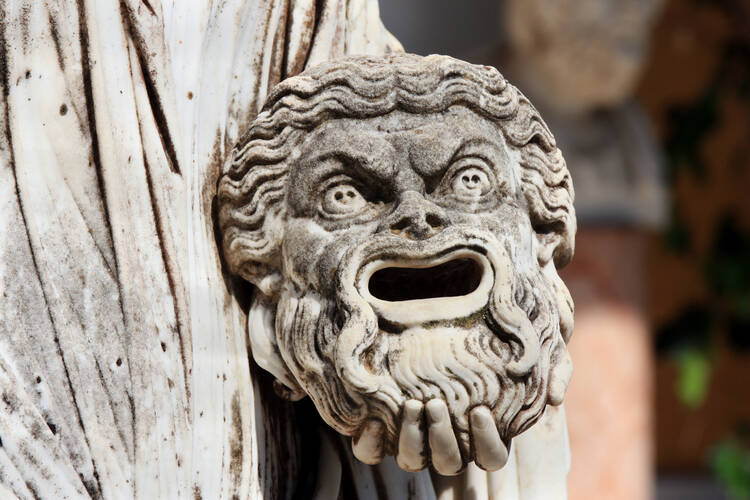 A tragic mask in the hand of a statue of Melpomene, the Muse of Tragedy, on the island of Corfu in Greece. (iStock)

Midway through the first chapter of Terry Eagleton’s new book, Tragedy, one gets the sinking feeling that this is one of those unlucky books that was completed and typeset into galleys just prior to a shift in the zeitgeist so immense that the published book is forced to step blinking into a world for which it is now awkwardly ill-suited.

No writer could have foreseen what was in store for us all in a year best summed up by a tweet from George Martin, the creator of “Game of Thrones,” “2020 was directed by me.” But Terry Eagleton offers a dense book of lit-crit hairsplitting to a chaotic time badly in need of a cultural thinker of his caliber.

The book begins, promisingly enough, with Eagleton identifying the stuff of tragedy to be “affairs of state, revolts against authority, thrusting ambition, court intrigues, violations of justice, struggles for sovereignty.” But Eagleton stays so focused on the minutiae of critical criteria that some of what he says comes off as a wince-worthy trivialization of the human dimension of the tragic. Even with his authorial tic of riffing on the quotations of other theorists in a way that blurs his own stance, plenty of tone-deaf howlers leap out.

Terry Eagleton offers a dense book of lit-crit hairsplitting to a chaotic time badly in need of a cultural thinker of his caliber.

I kept imagining a darkly comic Monty Python sketch with Terry Jones—a dead ringer for Eagleton—reading aloud from this book to a just-evicted family: “Tragedy cannot tolerate a utilitarian ethics or an egalitarian politics. As an aristocrat among art-forms, it serves among other things as a memory trace of a more spiritually exalted social order at the heart of a distastefully prosaic epoch.” Or shouting through a bullhorn, over tear gas, at a rally, “Whatever leaves us dejected rather than exalted—an air crash, or famine, the death of a child—fails to qualify for tragic status.”

This is the very thing Eagleton himself pounced on in a previous book about tragedy called Sweet Violence, taking a scholar to task for saying that “in tragedy, there is implicit, not only the possibility of redemption, but the spiritual assertion that man is splendid in his ashes, and can transcend his nature.” To which Eagleton replied: “It is hard to see that the victims of Bosnia or Cambodia are particularly splendid in their ashes.”

But that was Terry Eagleton a few iterations of self ago. He has been a shape-shifter since making a name for himself as Oxford’s rebel-in-residence on the then-hot subject of Marxist aesthetics. When that field cooled in the ’80s, he remade himself into a more gentlemanly don and gatekeeper of the burgeoning craze that provided the title of his best-selling book, Literary Theory.

But in a rare lapse of timing, he has missed a moment here. At this time in our riven polis, with raging hostility on all sides that can turn a family’s holiday dinner table into “Thanksgiving at the House of Atreus,” Eagleton shows up for Tragedy tweed-side out. In fact, for a book of that title, with no clarifying subtitle, he stays aloof from the emotional drama of the genre.

At this time in our riven polis, with raging hostility on all sides that can turn a family’s holiday dinner table into “Thanksgiving at the House of Atreus,” Eagleton shows up for Tragedy tweed-side out.

His only in-depth look at an actual play comes in the skimpy second chapter on “Oedipus Tyrannus,” which is a quarter of the length of the other four chapters in the book. Bearing the unfortunate title “Incest and Arithmetic,” it is an oddly wonkish reading of incest as a largely numerical phenomenon. “In the peculiar arithmetic of incest, each individual is also several-in-one,” Eagleton posits, trying to stretch into universality the King of Thebes’s rather unique provenance: “As more than one, Oedipus is no more than anyone, since all individuals, if only by virtue of being subject and object, are necessarily non-self-identical.”

The reason for this perfunctory treatment of the play comes clear in the next two hefty chapters (“Tragic Transitions” and “Fruitful Falsehoods”). Here we see what Eagleton really seems to want to do in this book, which is parsing critical theory and sparring philosophically with a list of his favorite theorists, from Lacan to Kant to George Steiner to Hegel. Eagleton is without question a deft parser of critical nuance and a complex philosophical thinker. At its best, the interplay bursts forth in a passage like this one—as thrilling a description of the milieu of tragedy as one could ever find:

In this realm of pampered, perverse desires, history is mere temporal decay, flesh, honour and allegiance are commodities to be bought and sold, and a deep desire for oblivion runs beneath the steady dissolution of meaning into savage farce. Human identities are as fractured as the broken-backed form of the plays themselves.

At its worst, you feel like you’re eavesdropping on a pedant amusing himself with overwrought asides like: “Althusser’s theory of ideology mixes a dash of Spinoza with a touch of Schopenhauer, Nietzsche and Freud.”

There is some value to a book that lets us watch a talent like Eagleton dissect other theorists. This is, after all, what he did so beautifully in Literary Theory. But there was a clarity and “spirit of teaching” in that book that is all but absent here. Tragedy is a difficult read, with no clarifying chapter subheadings and too few paragraph breaks to guide us through the labyrinth of Eagleton’s highly subjective perceptions. And the structure, if there is one, relies simply on how long he feels like lingering over a point before hopping on to some new notion. Rarely do the (albeit sometimes brilliant) smaller units cohere into solid takeaways for a reader, let alone build up to something approaching revelation. All of which calls into question the editorial latitude Eagleton has been given here.

‘The Trojan Women’ speaks to the brutalities of war, in countries that know them all too well
Deniz Demirer

In the last decade, Yale University Press has published book after book of his. But with them coming sometimes annually, it is hard to believe each project is an individually wrought work of carefully ripened ideas burning to be shared with their moment in time. This may explain why Tragedy feels like a mishmash of new glosses on old preoccupations and one big rush to get some as-yet-unpublished gems into print. By the time we reach Tragedy’s final, aptly named chapter “The Inconsolable,” you can almost hear him shifting through yellowed pages of the previously-killed darlings he is repurposing.

The real shame here is that an opportunity has been missed. There is, to be sure, a timely book to be written about this subject, but not one that gentrifies tragedy into a set of aesthetic imperatives in the service of a superstar scholar’s intellectual whims. What is needed is a book that will, instead, use this powerful genre to serve our collective understanding of human suffering.

This article also appeared in print, under the headline “A tragic protagonist,” in the October 2020, issue. 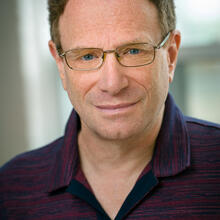 Ron Marasco is professor emeritus of theater arts at Loyola Marymount University, Los Angeles, and the author of numerous books.