‘The Trojan Women’ speaks to the brutalities of war, in countries that know them all too well 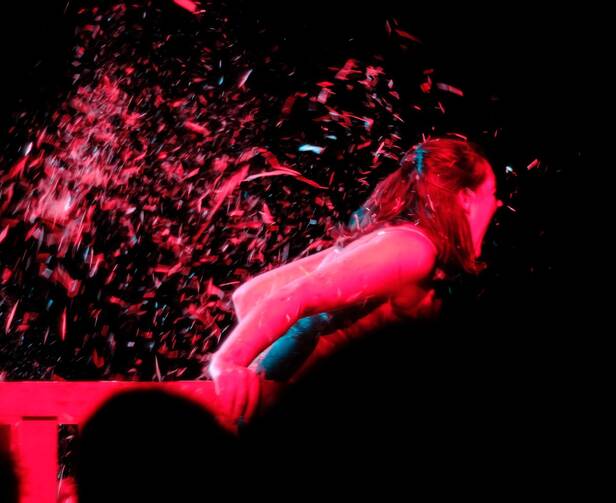 “The Trojan Women,” Euripides’ 2,500-year-old tragedy, was inspired by the conquest of Melos by the Athenians in 416 B.C. during the Peloponnesian War. The subjugation of the Melesians by the Athenians that followed was devastating. Euripides took these historic events and transformed them into a play about the conquest of Troy by the Greeks. The women of the city play a central role, and it is through their perspective that we witness the tragedies of war: the brutal murder of their soldiers and husbands, the rape and enslavement of the women, the separation of children from their mothers and consequent exile.

Since 1975, a touring production of “The Trojan Women” staged by New York’s La MaMa Experimental Theater Club has played in more than 30 countries.

In the play, the conquered Trojan queen Hecuba laments the desecration of the holy Athenian temples and the exoneration of the rapist who defiled her virgin daughter. The play is timeless, as humanity continues to be assailed by seemingly endless injustices and conflicts, and it is often women who are the most affected by violent instability.

Since 1975, a touring production of “The Trojan Women” staged by New York’s La MaMa Experimental Theater Club has played in more than 30 countries. Beginning in 2013 in Guatemala, La MaMa transitioned from merely performing the show to collaborating with arts groups across the globe. Now called “The Trojan Women Project,” the show was transmitted orally to new generations of artists, with La MaMa member George Drance, S.J., serving as director of training. The staging, words, music and movement were given to artists in countries where the wounds of war had scarred communities and often remain unresolved.

La MaMa transitioned from merely performing the show to collaborating with arts groups across the globe.

What makes La MaMa’s production of “The Trojan Women”particularly special is not only its unique form as a “composed, epic opera” using a completely invented language, but also its deep sensitivity to the role women play in the aftermath of war. It magnifies the ability of theater to give bone-chilling immediacy to the notion that none of us are above passively witnessing crimes against body and soul while doing nothing to stop them.

The play was first developed at The Great Jones Rep in New York by Elizabeth Swados, Andrei Serban and Ellen Stewart—La MaMa herself—in the early 1970s. The most recent New York iteration of “The Trojan Women”at La MaMa in early December brought together a cast of about 50 performers in total. Some came from the same war-torn regions of the world where prior collaborations had taken place including Cambodia, Guatemala, Kosovo (Serbs, Albanians, Roma), as well as actors from New York and members from the original cast from La MaMa in 1974.

None of us are above passively witnessing crimes against body and soul while doing nothing to stop them.

I spoke with the Kosovan actor Ilire Vinca during the show’s rehearsals a week before opening night. At that time the lean, sharp-featured actress wasn’t sure what character she was going to play. “In my home country I played Andromache,” the wife of Hector, prince of Troy. “Here they said I should learn Hecuba, so [the director] Andrei [Serban] will decide for each of us, but I need to know all the material.”

She didn’t find this aspect of the process off-putting because much of the approach inherent to the production was to level the playing field among the performers. Some of the actors were new to theater in general and many integrated native tradition and ritual into their performance based on their own ancient customs. The combination of these factors made traditional casting less effective.

Ms. Vinca found it beautiful that she didn’t yet know which character she was going to play this close to opening night. “It could be Hecuba, it could be Andromache, it could be any of those or none of those because it’s a big cast. It could also change each night.”

Some of the actors were new to theater in general and many integrated native tradition and ritual into their performance.

Learning dozens of pages of an invented text based on intonations inspired by ancient languages including Navajo, Náhuatl and Swahili, is no easy feat. But the rhythmic nature of the invented words and the distinctive musical accompaniments help the actors embody the unique idiom of the characters. Swados, a Tony Award-winning composer who originally wrote the musical language of the play, wanted it to be understood by anyone, anytime, anywhere. This was in line with La MaMa founder Ellen Stewart’s edict that the plays produced there should be understood by visitors who could not speak English.

“When I see four other Andromaches played by my colleagues [in one night of rehearsals], I see how everyone is different, everyone,”Ms. Vinca reflects. Based on what they have experienced, each actor brings something of themselves to the character. “We don’t take anything for granted. There are Andromache everywhere,” she says. In Euripedes’ play, Andromache’s son (by Hector) was thrown to his death from the city walls after the Greeks took Troy. The same tyrant who murdered her son then made Andromache his personal sex-slave.

Elizabeth Swados wanted the musical language of the play to be understood by anyone, anytime, anywhere.

Suffering of a severe and often unacknowledged kind persists today; the living flesh-and-blood Andromaches of the world are everywhere. After I ask her how her experiences with the warin Kosovo connect to her role(s) in the play, Ms. Vinca becomes thoughtful: “During the rehearsals and our work on ‘Trojan Women,’ it feels like I am not playing—my own life just continues.” She goes on to explain that there is little distinction between her own life and the life she portrays on stage because of her experiences in the war that go back to her childhood. Kosovo’s ethinic conflict between Serbs and Albanians stretches back over 100 years, finally erupting into its bloodiest clash in 1998 when many thousands were killed and well over a million displaced.

The audience witnessed the indecencies perpetrated against the innocent women of Troy. We could do nothing but watch.

The night I saw “The Trojan Women,” Ilire Vinca played Hecuba. The play began with the audience being herded from the theater’s second floor foyer into a huge hall where the story would unfold. High ramparts stretched along the periphery of the great dark room and there we witnessed the indecencies of the aftermath of war perpetrated against the innocent women of Troy—terror illuminated by a spotlight. We could do nothing but watch.

"Life is a Dream" - A Jesuit director's journal on his revival of "Spain's Hamlet"
George Drance, S.J.

It was exactly this expression of the deepest flaws of the human condition combined with the coming together of artists from all over the world who understood in their very bodies the pain of war and the aftermath of war that made “The Trojan Women” indispensable as a healing kind of theater. Like the sensation of fire on flesh, it could be understood by any creature, bringing everyone together at a primal level.

Ultimately, one is swept away by the visceral enchantment and raw power of the play. In the director’s notes in the play’s program, Serban wrote, “These women hold something (the spirit) that the primitive uneducated soldiers can’t take away. These women will bear the children and will inspire the creation of a new civilization. Transmission and sharing, two words that connect history and theatre.”