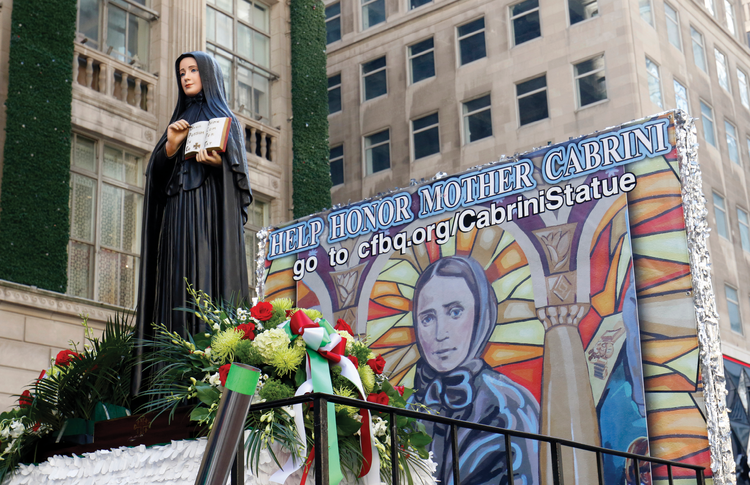 A statue of St. Frances Xavier Cabrini is displayed on the Diocese of Brooklyn, N.Y., float during the Columbus Day Parade in New York City Oct. 14, 2019. Italian Americans and many others are calling for New York to honor the patron saint of immigrants with a public statue. (CNS photo/Gregory A. Shemitz)

Philosophically speaking, we Americans are incurable presentists. Everything best is new. Everything new is sparklingly so—and has been pulled from the ether rather than grown from the ground. It can be well-nigh impossible to get us to take even our own history seriously, much less that of other, more distant parts of our blessed world.

What goes for Americans goes equally for American Jesuits. Which is why, during the height of the summer every other year, all the American novices in the Society of Jesus are sent to Regis University in Denver for a monthlong course on Jesuit history.

The teachers of this course, each of whom is given a week to cover the essentials of their specialty, are typically drawn from the Who’s Who of Jesuit historians. When I was there one scalding Colorado summer years ago, John W. O’Malley captivated us with chronicles of the first Jesuits and the great church councils. Thomas Lucas fascinated us with accounts of his restoration of the rooms of Ignatius to their original simplicity. And John W. Padberg charmed us with fascinating stories of the impact of the Jesuit university on 19th-century Europe. Father Padberg opened his week of lectures with the following quip. “A good historian is nothing other than a high-class gossip.”

Far be it from me to label Leslie Woodcock Tentler a high-class gossip, but it is no reach at all to say that her book American Catholics: A History is both a rigorous and laudable effort to cure us American Catholics of the illusion that our desires have no history.

Like all good historians, Professor Tentler peppers her book with fascinating historical tidbits. I had no idea, for example, that in 1787 and 1788 irked parishioners of St. Peter’s Parish in New York twice prevented the Rev. John Carroll—at the time the papally appointed “superior of the mission” of the entire United States—from saying Mass in their church by forcibly pulling him off the high altar. Nor did I realize quite how commonplace, in the early 19th century, was the Rev. Stephen Badin’s practice of relying on Angelique Campeau, a French-Potawatomi woman who spoke multiple languages, for help not only in preaching but in hearing confessions during his work as a frontier missionary in Indiana. Nor did I know that, in the booming post–World War II years, there were so many priestly vocations that it was common for a young priest to wait some 20 years before being named pastor of a parish.

Tentler’s larger story is told both chronologically and “from below.” She ranges from the horrors wrought upon the natives of Florida by Ponce de Leon’s 1513 expedition to our current sexual abuse crisis, and from consideration of the tensions between the French and Spanish (or Jesuit and Franciscan) models of inculturation to Pope Francis’ address to the joint chambers of Congress. In so doing, Tentler not only covers five centuries but does so while offering a series of snapshots of what it has meant to be a “good Catholic” in America. She demonstrates once again that by no means, and despite many protests to the contrary, has it always meant the same thing.

Leslie Woodcock Tentler’s larger story is told both chronologically and “from below.”

To bring some order to this effort, Tentler has split her study into five parts, showing us first the shape of Catholic lives in colonial America, then an expanding nation through the heart of the 19th century, the institutional expansion that provided a place for waves of Catholic immigrants in the early 20th century, the booming church that produced John F. Kennedy and Fulton Sheen, and finally the post-Vatican II unraveling in which we currently find ourselves. She opens each part with a brief profile. Mother Cabrini stands in for our immigrant experience and Patricia Caron Crowley—a lay female member of the Pontifical Commission on Population, Family, and Birth that preceded the issuance of “Humanae Vitae”—for our current unmoored state.

But the profile that opens the book and can serve here as an example of Tentler’s style and insight is of Eusebio Kino, S.J. In a few pages, Tentler not only tells the story of Kino’s life but does so in a way that allows him to serve as a lens through which we can begin to locate some of the most important fault lines of the colonialist age in America. In Kino’s case, this means not only placing him in the relatively positive context of the global expanse of Catholic missions but in the more-than-relatively problematic context of the colonial missionary priest as agent of empire.

It is to Tentler’s credit that she gives attention to such troublesome realities. Nor is such clarity of vision limited to the remote past, as she writes about the support of slavery by almost all Southern American Catholics (including certain bishops), the now-infamous 1838 sale of 272 men, women and children by the Jesuits of the Maryland Province and the recent trauma of the clerical sex abuse crisis.

In Tentler’s capable hands our own history, like our wills, turns out to be a recalcitrant thing.

But neither is Tentler an accuser in search of a scapegoat, and I found it edifying and encouraging to be reminded of the Catholic literati of the mid-20th century (Dulles, McLuhan, Murray, Merton, O’Connor, Percy, Powers) and of the impact of women religious throughout the entire history of the American church. It was in service of describing the symbolic role that women religious have played that Tentler tells a bittersweet story, one that captures so much of what is beautiful and strange about Catholicism.

It was 1910, and Father Cullane, the pastor of a rural Michigan parish, had invited two Holy Cross sisters to come from Indiana for a three-week visit. Their arrival was highly anticipated, and “business was at a stand still” when they finally arrived and made their way through town. But Tentler, drawing upon Cullane’s memoirs, also relates a visit they made to a German Catholic family. At the conclusion of the visit, as they were leaving the house, the hausfrau knelt down and asked not for the pastor’s blessing but that of the sisters. “The startled sisters,” Tentler tells us, “recovered their wits sufficiently to ask ‘Father’ to do the honors.”

In Tentler’s capable hands our own history, like our wills, turns out to be a recalcitrant thing. It is neither innocent nor guilty. It simply does not conform to our present categories. It is not, in fact, what we thought it was. Nor were we ever quite what we are supposed to have been. It is a stubborn thing.

It is precisely in this stubbornness, this recalcitrance, this strangeness and otherness that the gift of good history lies for us Americans. Because this recalcitrance, like a rock thrown at the windows of our relentless presentism and endless nostalgia, has the capacity to break us open, to show us from where we have come. And where it still may be possible to go.

This article also appeared in print, under the headline “Five centuries of Catholic lives,” in the July 2020, issue.

Patrick Gilger, S.J., is pursuing a doctorate in sociology at the New School for Social Research. He is America’s contributing editor for culture.