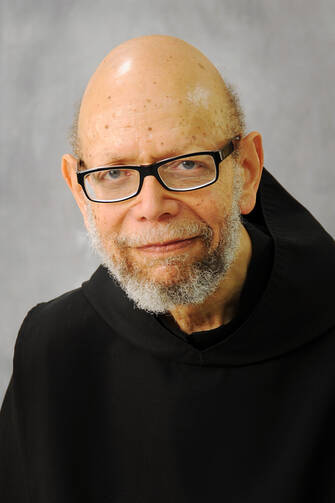 A funeral Mass will be celebrated May 21 at St. Meinrad Archabbey in St. Meinrad for Benedictine Father Cyprian Davis, who died May 18 at Memorial Hospital in Jasper. He was 84.

Father Davis wrote six books, including "The History of Black Catholics in the United States," published in 1990. He was working on a revised edition of the book at the time of his death.

He also had also written what is considered the definitive biography of Mother Henriette Delille, the black foundress of the Sisters of the Holy Family in antebellum New Orleans. Her sainthood cause was opened in 1988 and she was declared venerable in 2010.

Born Clarence John Davis Sept. 9, 1930, in Washington, he joined the Catholic Church as a teenager.

He began teaching church history at St. Meinrad in 1963, and in 2012 became the school's first professor emeritus.

Father Davis was an archivist of the archabbey. He also belonged to the American Catholic Historical Association and the Society of American Archivists.

He also served as archivist for the National Black Catholic Clergy Caucus, of which in 1968 he was a founding member. Father Davis contributed to the second draft of "Brothers and Sisters to Us," the U.S. bishops' 1979 pastoral letter on racism, and helped write the initial draft of "What We Have Seen and Heard," the 1984 pastoral letter on evangelization from the nation's black Catholic bishops.

His other books include "Christ's Image in Black: The Black Catholic Community Before the Civil War," "To Prefer Nothing to Christ," and "The Church: A Living Heritage," He was co-author of "Taking Down Our Harps: Black Catholics in the United States," with Georgetown University theology professor Diana Hayes, and "Stamped With the Image of God: African Americans as God's Image in Black," with Dominican Sister Jamie T. Phelps.

"Father Cyprian Davis was a significant leader as a Benedictine monk and priest of St. Meinrad Archabbey and as a spiritual writer, historian, and advocate for the vibrant presence of African-American Catholic leaders," said a May 18 statement from Archbishop Joseph E. Kurtz of Louisville, Kentucky, president of the U.S. bishops' conference.

"Most of all, Father Cyprian was a humble child of God who sought in an unassuming way to live a life of holiness and to place his considerable talents at the service of Christ and his church," Archbishop Kurtz added.

Father Davis was honored numerous times. In 2007, he received the Marianist Award from the University of Dayton in Ohio. In 2003, he was awarded the Johannes Quasten Medal for Excellence in Scholarship and Leadership in Religious Studies by Catholic University. In 1992, Father Davis won the American Catholic Historical Association's John Gilmary Shea Prize for "The History of Black Catholics in the United States,'' for making the most original and significant contribution to the historiography of the Catholic Church. He also won the Brother Joseph Davis Award in 1991, and was given an honorary degree in 2001 by the University of Notre Dame.

In a 2007 interview with Catholic News Service, Father Davis said his love of history is what helped motivate him to join the church. "I would never describe my odyssey as being an intellectual journey. It was more or less a falling in love with history. It made me fall in love with one of the things history talks about, and that would be the Catholic Church," he said.

Interviewed at length by CNS in 1999, Father Davis said, "I think to a large extent the mentality of many black Catholics has been that we are a people who are almost like still on mission." However, he added, "we also should have an understanding of contributions that have been made and are being made. And that there is more to being black and Catholic than the fact that we've got nice music," he noted, laughing, "and that we probably do very, very wonderful liturgies. ... There is more.

In a 1992 critique of the U.S. bishops' 1990 pastoral letter "Heritage and Hope: Evangelization in the United States," written, in preparation for the fifth centenary of Christopher Columbus' arrival to the Americas, Father Davis said: "What the pastoral fails to say is that both in North America as well as in South America, the Hispanic culture bore the marks of a Catholicism that was African as well as Native American, was black as well as brown."

Also missing, he added, was acknowledgement that "bishops, priests, religious men and women, and institutions such as convents, monasteries and seminaries in the United States had their slaves."

In a 2004 column for CNS, Father Davis said, "In another decade or so U.S. Catholics will learn that our church is more black, brown and in-between than Caucasian and more catholic than they dreamed. Will we be prepared for what that will mean?"

He is survived by a cousin and a niece.

Catholic News Service
Show Comments (
1
)
Comments are automatically closed two weeks after an article's initial publication. See our comments policy for more.
SHAWN O'NEAL
7 years 6 months ago
I cannot begin to put into words how grateful I am to have had him for both a professor and a spiritual director.