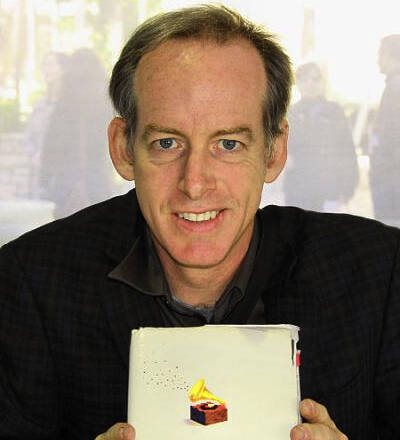 Paul Elie is an American Catholic writer, literary critic and editor based in New York City. He is a contributor to the Atlantic, Commonweal, and The New York Times and a senior research fellow with the Berkley Center for Religion, Peace, and World Affairs at Georgetown University. He was previously an editor at Farrar, Straus and Giroux from 1993 to 2012.

Mr. Elie is the author of two acclaimed books, The Life You Save May Be Your Own: An American Pilgrimage and Reinventing Bach. At the Berkley Center, he directs the American Pilgrimage Project, a partnership between Georgetown and the oral history non-profit StoryCorps that collects stories on the ways religious beliefs inform the experiences of ordinary Americans at crucial moments in their lives.

On July 18, I interviewed Mr. Elie by telephone about his ongoing story project. The following transcript has been edited for content and length.

What inspired you to start the American Pilgrimage Project?

At a certain point in the sexual abuse crisis, which is ongoing, I thought to myself: “There must be a way for Catholics to tell some of their untold stories outside of the courtroom.” What the sexual abuse crisis made clear is that there are areas that American Catholics are unaccustomed to talk about: sexuality, of course, but also other aspects of our experience. The only place we were hearing these stories publicly was in news reports about sex abuse lawsuits. It called to my attention how many stories are going untold. So I met with Dave Isay, founder of StoryCorps, and reached out to Georgetown’s president, John DeGioia—and now, some years later, the project is ready to begin in earnest.

Time and reflection have given us a better sense of what we want the project to be. It quickly became clear that there was no good reason for us to focus on just Catholic stories, in part because those stories often involve other religions anyway. So we decided that we needed to take in religious experience in the broader sense. Another thing that became clear was the sheer breadth and variety of people’s stories that touch on belief in one way or another—stories of families, stories of neighborhoods, stories of encounters with people of other faith traditions, for example.  We hope to gather stories told by people in religiously “mixed” marriages, where interfaith dialogue takes the form of domestic encounter.

How do you conduct this research?

Our partner Story Corps has gathered more than 60,000 stories for its projects and is very adroit at going about it. Instead of bringing strangers together, StoryCorps gets people who know each other to sit at a microphone and talk about what they consider important. Story Corps has facilitators to focus the conversation and certain questions that serve as prompts. A full session lasts one hour.

What have you learned so far in the project?

In American society today, we hear a great deal about the religious habits of Americans from statisticians and demographers. You know how it goes: a study comes out reporting that 90 percent of people believe in this or that, or that the number of Americans with no religion has tripled, or whatever. We also hear American leaders making broad assertions about religious doctrines and their bearing on public life. But the actual experience of ordinary people is scanted or overlooked. I hope the American Pilgrimage Project will help in some small way to correct that. What do people actually believe? How do their beliefs bear on their daily lives? Those are perennial questions, needless to say. Typically to answer them we look to literature, we look to history, we look to journalism and we look to the mass media. Now the hope is that we’ll be able to turn to the American Pilgrimage Project archive as well. It will help to broaden and complicate the narrative.

I post pieces daily to a Georgetown website called www.everythingthatrises.com, where the focus is on literature, the arts, current affairs, religious belief and the ways all these fit together. And as I write for the site, generally a short essay every day, I’m struck again and again by how many stories circling around in our society have a religious dimension to them. It’s there in plain sight.

What are your current deadlines and goals for the project?

We’re planning to go to three different locales in the next six months and gather stories there. We hope to present those stories in a public event or exhibit at Georgetown in the late spring or fall of 2015. Mainly what we’re creating is an audio archive. I might write a book about these stories one day, and there will probably be other media. But whatever else happens, the stories will exist for generations to come as audio files in the American Folklife Center at the Library of Congress and we hope in Georgetown’s libraries, too.

Your writing strives to articulate the expression ofreligious ideas in American literature, arts, music and culture. Have any particular themes or ideas emerged in your recent work?

I think of my writing as narrative portraiture. All of my work involves the interpretive power of narrative, and the American Pilgrimage Project just takes that instinct in another direction. In American Catholicism today, doctrine is poorly understood, institutions falter, leadership is mistrusted, but narrative is still robust. People still have some knowledge of the core narratives of the Catholic tradition and can recognize their power in the present, as when Pope Francis washed the feet of a full array of people of Rome during Holy Week the past two years.

People identify you as a Catholic writer. In what way is that true of you?

Well, I’m a writer and I’m a Catholic. Beyond that, my goal is to to produce work about Catholicism that has a distinctly Catholic dimension at a deep level. Take my journalism for the Atlantic about the three popes: John Paul, Benedict and Francis.  We’re so used to news reports that depict Catholic leaders as managers, or strategists, or people with the “leadership gene.” Well, I try to depict them as Catholics, as religious believers first of all. In my Atlantic portrait of Benedict in the time of Francis, for example, I took up the theme of renunciation and wound it deep into the structure of the piece, with the aim of showing how Benedict’s renunciation of the papacy has led him to the more complex act of renunciation involved in largely keeping his silence as Francis has led the church in a different direction and with a notably different style. Instead of just drawing a contrast between Francis and Benedict or making a big deal of the phenomenon of a living ex-pope, I drew on the three books of interviews Benedict gave when he was Cardinal Ratzinger in order to dramatize the life he is living now, which is principally the interior life.

How has church reform and Pope Francis come up in your research or writing?

The word reform is complicated because of its connotations from the Protestant Reformation. In some areas, such as the Vatican Bank, it seems to me what Francis is doing is not reform but deferred maintenance. In other areas, such as priestly sexual abuse and episcopal evasions of same, we are still waiting to see whether a clear impetus to reform has real effects. But in the sense that to “reform” means to find new forms, we see Francis doing that day in and day out—whether it’s by living in the Casa Santa Marta, by opening the papal apartments as a place of prayer for peace, or by saying, in clear contradistinction to his recent predecessors it seems to me, “God save us from the fear of change.”

I worked for almost 20 years in publishing, which gave me a very practical sense of literary texts. When you judge a manuscript, you first try to figure out if it’s alive and how alive it is. So I try above all to make my work live for the reader, so that the reader can feel the life in the works I am describing and the larger traditions that inform them. If you’re writing a book about Flannery O’Connor, she has to live for the reader in the book, and so do her stories. Likewise in my articles about John Paul, Benedict  and Francis. If they don’t live on the page, it hardly matters what the commentators in the pieces say about them.

As I was organizing the American Pilgrimage Project, I had in mind the Relations—the Jesuit missionary tradition of doing thorough and attentive work on all aspects of religious life. The first Jesuits in North America would write long letters back to Europe, reporting on religious traditions and practices of the places where they were working. In a sense, the American Pilgrimage Project is an echo of that.

Sean Salai
Show Comments (
2
)
Comments are automatically closed two weeks after an article's initial publication. See our comments policy for more.
Sandi Sinor
7 years 6 months ago
Fr. Salai, you have selected an eclectic group for your interviews. I would like to suggest one more - Richard Rohr, OFM. His new book is reviewed at NCRonline - Eager to Love: The Alternative Way of St. Francis. Richard Rohr has kept many despairing Catholics in the church. He is not an academic or theologian, but his articulation of faith and belief has given millions of Catholics the hope they need to stay Catholic.
Sean Salai, S.J.
7 years 6 months ago

Thanks for the suggestion. I'll see what I can do about it next week.