Review: The Christ-like (and paradoxical) life of Dorothy Day 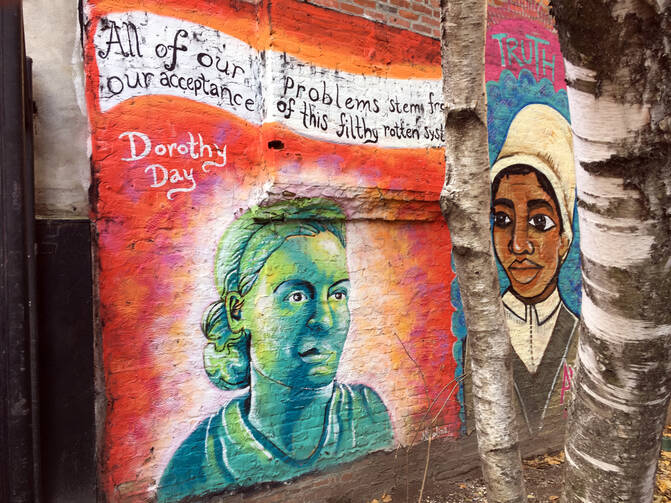 A mural depicting social activist and sainthood candidate Dorothy Day in a park near the Church of the Nativity in New York City. (CNS photo/Gregory A. Shemitz)

Nearly 40 years after her death, the Catholic activist and saint-in-the-making Dorothy Day continues to confound most believers. The founder of the Catholic Worker movement, alongside the vagabond philosopher Peter Maurin, and the still-extant Catholic Worker newspaper, Day lived a life that today poses significant challenges for just about anyone mindful of the least of our brethren.

Day’s legacy, in all its complexity and wonder, makes for lively reading in Dorothy Day: Dissenting Voice of the American Century. Authors John Loughery and Blythe Randolph have mined rich primary sources and other materials to help explain how an early 20th-century, middle-class social activist and reporter with a penchant for alcohol, male company and 1920s-style bohemian living emerged as a kind of American Mother Teresa.

Day compounded her early life’s waywardness by undergoing an abortion in the mid-1920s and by her on-again, off-again membership in the Communist Party, then seen as a dangerously subversive organization. Formally received into the church in 1928, Day bought the entire package, including an enduring sense of obedience to magisterial authority. This surrender did not prevent Day from assailing church leaders and even complacent practitioners for an apparent deference to politics, patriotism and the spirited pursuit of material comforts.

Loughery and Randolph suggest that the Great Depression of the 1930s and the entry of the United States into World War II in 1941 only hardened Day’s view that followers of Christ were not doing enough to work for peace and relieve suffering around them. “An even far more fundamental problem, Dorothy believed, was that the American people were conditioned to embrace an entirely new outlook, one that left them feeling overly reliant on government,” they write.

Day's enduring sense of obedience to magisterial authority did not prevent her from assailing church leaders and even complacent practitioners for an apparent deference to politics, patriotism and the spirited pursuit of material comforts.

Loughery and Randolph’s biographical narrative picks up speed as it follows Day’s career from the end of World War II up until the mid-1970s, when her activism, picketing and protesting finally began to subside. Day was first arrested in 1917 for picketing in favor of women’s suffrage, and her last incarceration took place in 1973 in connection with her involvement in Cesar Chavez’s United Farm Worker protests.

Day picked and chose her battles. For example, the issue of gay rights and pastoral service to the homosexual community was one area in which Day’s sense of service might have been wanting. “Even separate from the matter of the Church teachings on the subject of homosexuality, The Catholic Worker had never been a paper devoted to every social issue the United States confronted,” write the authors. “It had always been selective in its coverage and commentary. In truth, in any context, homosexuality was not a topic Dorothy really wanted addressed in its pages.”

In recounting the life of someone once described as the most significant lay Catholic woman of the 20th century, this biography is useful and illustrative reading. Not only does it highlight Day’s many paradoxes, it also presents its subject as a challenging role model for any follower of Christ.

“The same woman who attended Mass every day of her adult life, refused to hear any criticism of the Pope, and accepted Vatican teachings on all matters concerning sex, birth control, and abortion,” the authors astutely observe, “could be blistering in her remarks about priests who lived in well-appointed rectories and turned a blind eye to racial segregation in their own parishes, bishops who were allies of the rich and powerful, and Catholic writers who viewed patriotism and faith as equivalent virtues, who were more concerned with the threat of ‘godless Communism’ than the needs of the poor.”

This article also appeared in print, under the headline “Saintly and fiery,” in the May 25, 2020, issue.