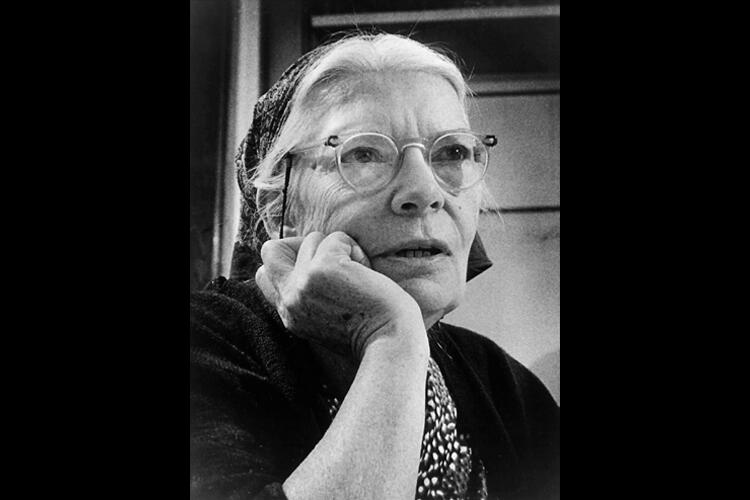 It is when the Communists are good that they are dangerous. And the trouble with many Catholics is that they do not recognize this dangerous goodness but think of Communists as characters from E. Phillip Oppenheims international mystery novels.

Not long ago a Catholic novel was published by the Macmillan Company, and it was all about the fiendish Bolsheviks and their international agents and how refugee women of gentle birth were kidnapped and returned to Russia to be mated to nobles, in order that they might propagate a race of supermen.

The story is fantastic. One expects the characters to turn into demons or angels. One is amazed that such a book could be seriously written. It should have ended on the fantastic note struck by G. K. Chesterton in "The Man Who Was Thursday."

The story is obnoxiously class-conscious. Nobles are nobles by nature as well as by birth, and the lower classes are noble in that, they are the faithful servitors of those above them. If they are interested in those of their own class, and in righting the wrongs done them, then they are beetle-browed Bolsheviks.

And lastly, the story is untrue.

My association with the radical movement began while I was in college and continued for a decade. I worked for the Socialist paper, the Call, for the radical monthly, the Masses, for the anti-conscription League, for the Communist monthly the Liberator, and for the Anti-lmperialist League, and in these, various jobs I became acquainted with many people connected with the labor movement, so that I can write from actual knowledge of the goodness of the people with whom I came in contact. Leaving friends and acquaintances out of it, however, take the case of William Z. Foster, the Communist candidate for President, a man respected and admired, even extolled in the weekly "capitalist" press. The New Yorker had a long article on Communist organization and Fosters part in it, and there was another leading article in the New Republic about the work of this man. From these articles, one could assume that Foster is a good man, a disciplined man, who lives for his ideals and is above the venality associated with political figures.

And then there is the case of the boy who lived across the street from me on East Fifteenth Street, between Avenue A and First Avenue, a peaceable Communist youth who was killed a few months ago when a Trotskyite sought to break up a Communist street meeting by hurling bricks from the roof of an adjoining house. For the last six months I had lived in this old German-Irish neighborhood just across from where this boy lived, and after his death I heard a great deal about him.

He had for years been the support of his invalid mother, his unemployed father, and his schoolgirl sister. The day his body was taken away, the German and Irish neighbors gathered in front of their stoops and spoke of him with hushed voices and heavy tears in their eyes.

"He was a good boy, so steady and so clean."

"He took such care of his family, and him so young." " He used to come into my shop for milk every morning. So polite he was! Such a nice way of talking! "

"He was a Communist, yes, but he was so good." What they said of him typifies what I mean. He was not wild eyed, shaggy haired, revolutionary looking. He was not a hater of the institution of the family. He worked and served his father and mother and sister. He had courtesy and respect for his fellow-man, and at night, after his days work, he studied to better his condition. His life was actuated by a love of his fellows, and in his love for his fellow-creatures he forgot his Creator, if indeed he had ever known Him. Together with other boys on this street, he had been brought up without any religious training, and in growing up, he, with high ideals, had espoused the cause of the worker.

The other boys hung around pool rooms, street corners, and clubs, spent their hours in playing cards and gambling, discussed politics in terms of graft and rackets.

He went to meetings, discussed the questions of child labor, workingmens rights and unemployment, and donated from his own small earnings towards strike funds to feed the hungry workers, and the mothers and children of other workers like himself.

In the Communist movement in America, the question of religion only comes up when a strike is being carried on in a Southern mill town, for instance, where the mountaineers are sincerely believers, or in city factories where the foreign labor is Catholic. In these cases, here are Lenins directions in his writings on religion:

A Marxist must place the success of the strike movement above all else, must definitely oppose the division of the workers in this struggle into atheists and Christians, must fight resolutely against such a division .... We must not only admit into the ... party all those workers who still retain faith in God, we must redouble our efforts to recruit them. Weare absolutely opposed to the slightest affront to these workers religious convictions .... We do not declare, and must not declare in our program that we are "atheists."

It is the predictions of Engels and Lenin in their writing which disclose the "diabolic plot," the ultimate establishment of atheism, and one can only feel that the freeing of the masses from oppression is a means to an end, and not an end in itself.

"No books, no preaching, can possibly enlighten the proletariat, unless it is enlightened by its struggle against the dark forces of capitalism." "The roots of modern religion are deeply embedded in the social oppression of the working masses"; so relieve this oppression first in order to get at the roots!

Again and again Lenin urges that the fight against religion be postponed, and addressing those frantic ones who wish to rush into the battle at once, he reminds them that the bourgeois liberals are only too anxious to foment religious disputes in order to distract the attention of the people from the class struggle, and these religious wars lead only to a victory for the Church.

Those who have not gone to the root of dialectical materialism [i.e. of the philosophy of Marx and Engels] may not be able to understand this [necessity for delay] ... What! subordinate ideological propaganda, the propaganda of definite ideas? Subordinate the struggle against religion, the thousand-year-old enemy of culture and progress, to the class struggle, to the struggle for transient practical economic and political aims? ...

To draw a hard and fast line between the theoretical propagation of atheism, between breaking down the religious beliefs of certain sections of the proletariat, and the effect, the development, the general implications of the class struggle of these sections, is to reason non-dialectically; to transform a variable, relative boundary into an absolute one. It is a forcible tearing asunder of that which is indissolubly connected in reality.

I do not know whether the boy across the street knew what he was doing--that he was working with the distinct end in view of tearing down the Church. I do know that the good Irish and German neighbors didnt know it. They said sadly: "He was a good boy, a fine boy," and they wept at his passing

Dorothy Day (1897-1980) is the author of The Long Loneliness and other works. Day used proceeds from her writings for America to help found the Catholic Worker movement in 1933.