The Top 10 Pop Culture Events of the Decade 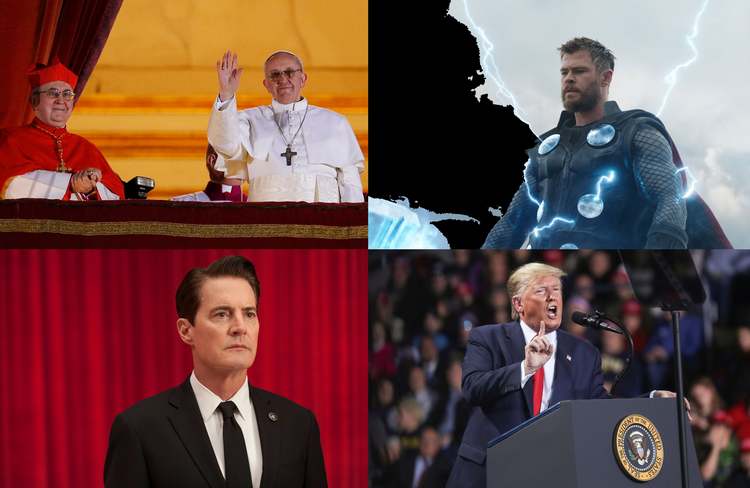 Everywhere I look these days I find myself confronted with Best of the Decade Top 10 lists. And I know they say as you get older time passes faster, but seriously, where did this decade go?

Also, how can it be that the finale of “Lost,” the introduction of the iPad and “Bridesmaids”all happened within the last 10 years? And why do I suddenly look so old?

Are you, too, having trouble getting your head around where we have been, let alone where we are headed? Here is a guide to 10 key moments in the pop culture decade that was.

How can it be that the finale of “Lost,” the introduction of the iPad and “Bridesmaids” all happened within the last 10 years?

May 4, 2012: The release of “Avengers.” Marvel Studios’ crazy-bold plan to build a billion-dollar comic book universe actually began in 2008 with “Iron Man.” But it was four years later, when characters introduced in all the prior films were brought together and Hulk-smashed their way to box office dominance, that Marvel’s venture fully took over world culture.

The results have been mixed. Audience appetite for stories of wisecracking superheroes with father issues has only grown. But Marvel’s success seems to have made everyone else more obsessed with finding their own 30-movie property than in taking the kind of risks that got Marvel there in the first place. And paradoxically, those films’ success has generally not translated into new comic book readers, leaving the industry responsible for these great stories more fragile.

Feb. 1, 2013: Netflix streams its first original show, “House of Cards.” It is hard to believe it has only been seven years since Netflix began producing original content. But “Cards” was a game changer. Almost overnight Netflix went from an online-Blockbuster Video store to the world’s largest producer of new material—and a place for big new ideas, like releasing whole seasons at once or sharing content from around the world.

It is hard to believe it has only been seven years since Netflix began producing original content.

Today the sheer volume of series and movies that Netflix produces seems to be overwhelming the demand. You hear regular complaints from people about having too much to watch, as though TV has become a kind of homework, and also of a certain sameness among most of it. Nevertheless a dozen other streaming competitors now nip at Netflix’s heels and our wallets. And the future of free-to-air networks and cable both seem more precarious than ever.

March 13, 2013: The election of Pope Francis. Pope Francis is famous for not having watched television since 1990. (Will he make an exception for “The Two Popes,”I wonder?) But his ministry as pope clearly has been informed by an understanding of the power of visual media, how a simple gesture or human moment can express God’s unending love to people around the world. Pope Francis has transformed papal visits and the Sunday Angelus alike into opportunities for people near and far to not only hear the word of God, but experience it for themselves. And in so doing he has both humanized the papacy and raised up the blessedness of the ordinary, the messy and the socially marginalized.

February 2014: Marvel Comics launches Muslim-American Ms. Marvel. If you were going to summarize the ’10s developments in pop culture in one word, you could not do better than “representation.” Whether it is in biopics about forgotten figures, science-fiction novels with protagonists of color or comic books like Ms. Marvel, widely praised as the Spider-Man for a new generation, the stories of women, people of color and the L.G.B.T. community have found a greater place in mainstream culture in the 2010s. What’s more, they have received both critical acclaim and commercial success.

The stories of women, people of color and the L.G.B.T. community have found a greater place in mainstream culture in the 2010s.

Growing representation has brought with it other cultural trends as well, including online harassment of minorities and women and calls for media industries to demonstrate diversity not just in the stories that are told but in who is being allowed to tell them. St. Paul wrote that all creation groans in labor; would that a new world would be born sooner.

September-October 2014: The debut of the podcasts “Start Up” and “Serial.”Podcasting had already been around for a decade when Alex Blumberg’s self-reported tale of trying to start a podcasting company and Sarah Koenig’s reporting on a convicted murderer were released within a month of each other. Together they dominated pop culture conversation, with each episode downloaded millions of times. “Start Up” launched Blumberg’s Gimlet media, which was recently bought by Spotify after producing both uber-successful series like “Reply All,”“Mystery Show”and “Heavyweight”and television shows like “Alex, Inc.,” “Homecoming” and the forthcoming “The Nod.” Meanwhile “Serial” reintroduced the true crime genre to a new generation, leading to a slew of other crime podcasts and TV shows.

“Serial” reintroduced the true crime genre to a new generation, leading to a slew of other crime podcasts and TV shows.

2016-present: The presidential campaign and presidency of Donald Trump.The 2016 campaign and eventual election of Donald Trump metastasized outrage into a kind of default setting on Twitter. Today not just celebrities but world leaders and religious figures use the service to have beef. Meanwhile, post-election analysis opened wide a series of problems at Facebook, which has largely undermined its credibility both as a news source and as a public service. At this rate in 10 years Twitter and Facebook may be little more than carcasses in the digital desert, their bones burned clean by a combination of user bile and government oversight.

If I could only choose one series from the last decade, it would be “Twin Peaks: The Return.”

But if I could only choose one series from the last decade, it would be “Twin Peaks: The Return.” No show has challenged the notion of what television could be like those weird, frustrating, astonishing 16 hours. Each week was like a glimpse into a distant future filled with ghosts and Nine Inch Nails. It haunts me still.

Oct. 25, 2017: Multiple actresses accuse Harvey Weinstein of sexual assault.The #MeToo movement has had many profound impacts, including on our pop culture. Endless revelations into the predatory culture present in so many media outlets have forced change and also helped incite a paradigm shift in mainstream society’s take on narratives of women and power. The backlash over Peloton’s Christmas commercial, in which a fit young woman is given the very strange gift of an exercise bike by her husband, is a case in point. Presumptions that might have gone without comment a decade ago now sit on the surface, where more people are seeing them for what they are and demanding better.

Jan. 5, 2018: Michael Wolff’s “Fire and Fury” published. Among the oddest pop culture trends of the 2010s has been the explosion of tell-all books about the Trump administration. Don’t get me wrong: The market is obvious, particularly given this administration’s complete unpredictability. But from one book to another there does not seem to be much in the way of new information or insight. As the little old lady once told the philosopher William James, “You’re a very clever man, but it’s turtles all the way down.” Have we become so jaded that what would have been alarming a couple of decades ago is now regarded as routine political score-settling?

March 24, 2018: The March for Our Lives and other demonstrations against gun violence.The 2010s began with the release of Harry Potter and the Deathly Hallows, the two-part ending to the Potter saga in which Harry, Ron, Hermione and their high school pals and parents fight to defeat the seemingly impossible forces of Lord Voldemort. At the time no one saw the series as a commentary on our reality, but by 2020 it has become so. Young people around the world have become some of the most prominent voices on everything from gun control and climate change to basic political rights in Pakistan, Hong Kong and Russia. In the face of endless bickering among those in power, our children appear more and more often the only ones willing to do something to fight our inertia.