Review: ‘The Two Popes’ is a tour-de-force that takes the Catholic Church seriously 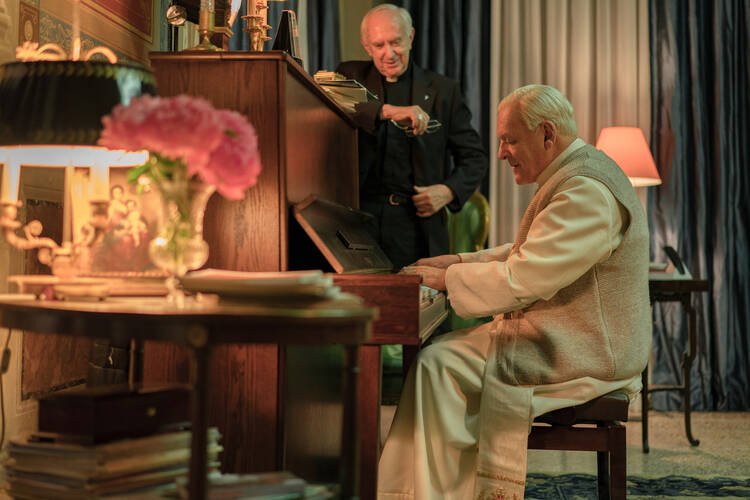 “The Two Popes,” a fly-on-the-tapestried-wall account of a one-on-one conclave between Pope Benedict XVI (Anthony Hopkins) and pontiff-to-be Jorge Mario Bergoglio (Jonathan Pryce), is a tour de force of acting, of actors interacting, of actors dueling and dancing—literally, at one point, as Pryce’s earthy Argentinian tries to teach the tango to Hopkins’s less-than-flexible German.

But in addition to its sly humor, Vatican locations and visually lush production design (inspired by Michelangelo, among others), the film addresses, however fleetingly, the weightiest questions confronting the church—not just about financial crimes and sexual abuse but dogma, ritual and the Christian mission. The movie does not really know how to end, it must be said. But as a character study it is an exhilaratingly intellectual, deftly directed drama that in the end suggests very strongly not just that desire is destiny, but that temperament dictates theology.

The film addresses the weightiest questions confronting the church—and not just about financial crimes and sexual abuse.

“The most important qualification for a leader,” says Cardinal Peter Turkson (Sidney Cole), during the 2005 conclave that opens the film, “is not wanting to be leader.” The cardinal adds, somewhat gratuitously given his audience, “Plato.” What he says without saying it is “Bergoglio.”

“The Two Popes” does not dwell on the 2005 election, but the event is necessary to establish both the political climate and the characters involved. With the death of Pope John Paul II, Joseph Ratzinger, prefect of the Congregation for the Doctrine of the Faith and dean of the College of Cardinals, is a leading contender for the Chair of St. Peter. And he very much wants the job—something that the director Fernando Meirelles (“City of God,” “The Constant Gardener”) implies mostly through gestures and reaction shots. Among the outliers in the balloting is Bergoglio, who to his own embarrassment gets 10 votes. It is not a close election, but everyone recognizes the cosmic significance of a Jesuit “from the end of the earth,” as Pope Francis would later describe it, having so solid a bloc of support.

The years skip by until 2012, and a summons from Benedict to Bergoglio, who has tendered his resignation as archbishop of Buenos Aires. He wants Benedict’s permission to quit his post and become a “simple parish priest” once again, and the pope isn’t inclined to give it: The pope has something quite different in mind, which is part of the brilliant evolution of Benedict as a character.

He is something of a stiff, who lives in a pontifical bubble and doesn’t know who the Beatles are. There is a snippet of the jazz musician Thelonious Monk playing on the holy TV set, which Benedict switches to his favorite show, about a dog detective. The little windows into Benedict’s inner life are almost mocking, especially as compared with his visitor’s open-hearted humanity, devotion to spirituality (and soccer). But Benedict’s intellect is fierce and his self-awareness not entirely absent, as evidenced in the scene in which he tells his visitor about his plan to abdicate.

Bergoglio is shocked and dismayed. There can’t be two popes, he moans.

“There were three popes in 1978,” Benedict replies.

“It’s a German joke,” the pope concludes. “It doesn’t have to be funny.”

The archbishop’s own plan to resign is tied up with his guilt over his experiences during the military dictatorship in Argentina from 1976 to 1983. As portrayed in the film, Bergoglio made the preservation of life a priority over resistance to the junta, and for this he suffered recriminations from others as well as his own regrets. The Argentina chapters are the less engaging parts of the film, frankly (the sequences involving the two principals in contentious discussion in Rome were the highlights for this viewer), but they help the audience to understand more deeply why Bergoglio does not see Rome moving in a satisfactory direction, and to appreciate his opposition to the more rigidly dogmatic side of the church—something Benedict personifies. Or so Bergoglio thinks.

While Meirelles and his cinematographer, César Charlone, were able to use some locations in and around Rome, including the summer residence at Castel Gandolfo, they had to substitute for Vatican locations and even recreated some—notably their Sistine Chapel, fabricated at the famed Cinecitta Studios. Part of Bergoglio’s tour when he visits Pope Benedict is a two-man visit to the chapel which, as the pope no doubt intends, is awe-inspiring. So is Charlone’s lighting—the characters seem to become part of the frescoes surrounding them, and in turn part of church and papal history. At the same time, the contrast between such Vatican magnificence and the humble Bergoglio could not be starker. “You imply that the rest of us aren’t living simply enough,” says the pope. He isn’t really kidding.

Both Pryce and Hopkins deliver astounding performances, and their presentation of their complex, multifaceted characters is enhanced by Anthony McCarten’s nuanced script (adapted from his stage play) and the director Meirelles’s appreciation for how much his two main characters’ body language, facial reactions and even clothing reveal their very divergent personalities. Pryce is the ostensible star of the film, of course, and his Francis-to-be is its hero, but there is a reason Anthony Hopkins is Anthony Hopkins. He makes the less charismatic Benedict a heroic figure in his way, someone deserving not just of admiration, but also of sympathy. “This popularity of yours,” he asks Bergoglio. “Is there a trick to it?” It’s enough to break your heart.

This review has been updated for print publication.

Show Comments ()
Join the conversation: Login or create an account
Before you can comment, you need to update your profile to include your first and last name, as required in our comments policy. Then reload this page and you'll be set up for commenting. Update your profile
Show Comments (
1
)
Comments are automatically closed two weeks after an article's initial publication. See our comments policy for more.
Zac Davis
3 years 1 month ago