Enraptured?: The sad, strange comfort of HBO’s ‘The Leftovers’ 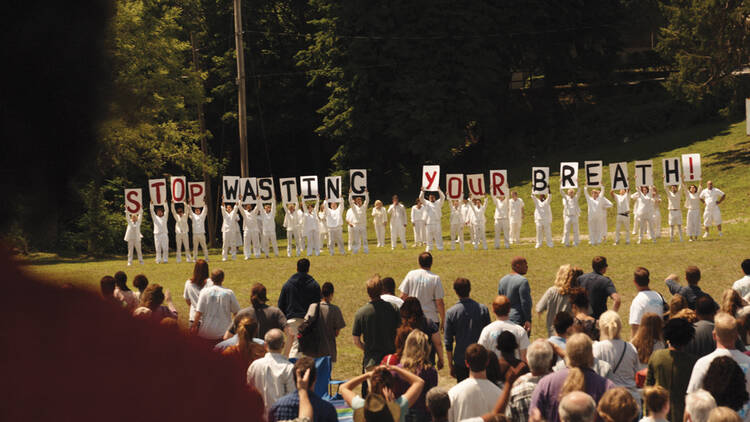 When HBO first announced that it had greenlit a television series about the Rapture, one would have been forgiven for assuming we were in for yet another twist on Hollywood’s seemingly endless obsession with the post-apocalyptic. Given the popularity of recent “scripturally inspired” projects like “Noah” or “The Bible,” some sort of high-profile, supposedly Christian pseudo-science fiction was inevitable. If anything, the only surprise was that it had taken the industry this long to get there.

Some two years later, that television show, The Leftovers, has just concluded its first season. But instead of religious kitsch, its co-creators, Damon Lindelof (co-creator of “Lost”) and Tom Perrotta (author of the novel on which the series is based), have created what may be the most thoughtful and brutally honest exploration of grief and loss ever portrayed on television.

The set-up is simple: On an ordinary day, 2 percent of the world’s population vanishes. No parting of the clouds, no voice from the heavens, just poof. Some believe it is the Rapture. And indeed, Pope Benedict is among those who vanish. But so is J-Lo. And Gary Busey. And Anthony Bourdain. (Apparently even God is always looking for a new place to get a nice gazpacho.) Others speak of the disappeared as “victims,” though of what no one can be certain. The only thing that is clear is that they are gone.

But instead of using this event as the jumping-off point for world wars (the president is secretly the anti-Christ!) or some kind of Last Judgment (Jesus carries an Uzi!), “The Leftovers” leaps three years ahead to follow the effects of the disappearance on the townspeople of rural Mapleton, N.Y.

Father Matt Jamison (Christopher Eccleston) spends his time researching the vanished, uncovering their sins so as to prove that the event was not the Rapture. Sheriff Kevin Garvey (Justin Theroux) has taken to day drinking, and may or may not be hallucinating that packs of feral dogs are running the streets at night. His son, Tom (Chris Zylka), has secretly dropped out of college and now works for a supposed faith healer, while his straight-A daughter, Jill (Margaret Qualley), has taken to attending orgy-like parties with her classmates.

Meanwhile Kevin’s wife, Laurie (Amy Brenneman), has left him to join a burgeoning local cult called the Guilty Remnant, better known as the G.R., whose members do not speak, dress all in white and smoke constantly as they stand outside people’s homes, watching them.

Though some people seem to be handling things better than others, every character we meet is in fact grappling with the same issues of grief and loss. They stumble through their lives less and less sure of what is meaningful or real, and in many cases grow more and more furious. This gives the narrative a serrated, whiplash sort of energy; you never know quite where the story is going, and the mood can shift in an instant from intimate to volcanic.

And as the characters wrestle on, their fellow townspeople in the G.R. silently stalk them, disrupting any private or public events from which people might draw solace. The group’s central insight seems to be that most of what we do as human beings is meant to help us avoid the truths of life—that we die, that life is random, that we are not special or safe but cast out and alone. Religion is a fiction that we hide within. So are holidays like the Fourth of July or Christmas. For the G.R., even family is a human construct meant to keep out the Big Bad Wolf of reality.

It is disturbing stuff, especially as the group’s methods grow more provocative. (The show is worth watching simply to witness the horrible, ingenious ways in which the G.R. try to shake people’s faith.) But the more time we spend with them, the harder it is to tell whether they are the most militant and hateful of atheists, or the most profound of spiritual disciples. Many of the questions they raise are not far from those of Buddha or Jesus. Nor are the reactions that they provoke.

When “The Leftovers” debuted, Todd VanDerWerff in the A.V. Club called it “some of the most desolate, despairing television on air” (6/26). The TV critic Alan Sepinwall labeled it a “tour de force of devastation and grief” (Hitfix.com, 6/25). More recently Emily Nussbaum of The New Yorker described the show as “obsessed with grief and terror” (8/4). (To be clear, these are the words of critics who adore the show.)

Some might label the show a theodicy, except this is not a story about trying to understand why bad things have happened or about getting to the heart of some crucial mystery. No, “The Leftovers” is about the profound struggle to survive in tragedy’s wake. It is probably not a story for everybody; but for viewers who have struggled to put themselves back together after tragedy, who have watched as initial catastrophe continues to spider-web across their lives over many years like cracks in a sheet of glass, splintering open so much that had seemed firm, definitive and stable, “The Leftovers” will be familiar territory. It may even prove a comfort.

@PopCulturPriest
Show Comments (
2
)
Comments are automatically closed two weeks after an article's initial publication. See our comments policy for more.
James Richard
8 years 3 months ago
I watched the series and found it to be interesting. FYI, the priest is an Episcopalian not Roman Catholic. In the beginning I couldn't figure out what the Guilt Remembrance mission was. It's become clearer now that they are just fanatical cynics who have chose to keep people remembering the loved ones who were taken, rather then allowing them to move on with their own lives. Anywy, I think it's pretty good and I'm sad that season one is already over.
Jack Bray
8 years 3 months ago
this review makes me wish I had stayed with the program...I found it highly improbable..having just published a book about a certain few who come back from the dead FOR A REASON, I was impatient by the lack of that in Leftovers...it just wasn't interesting...