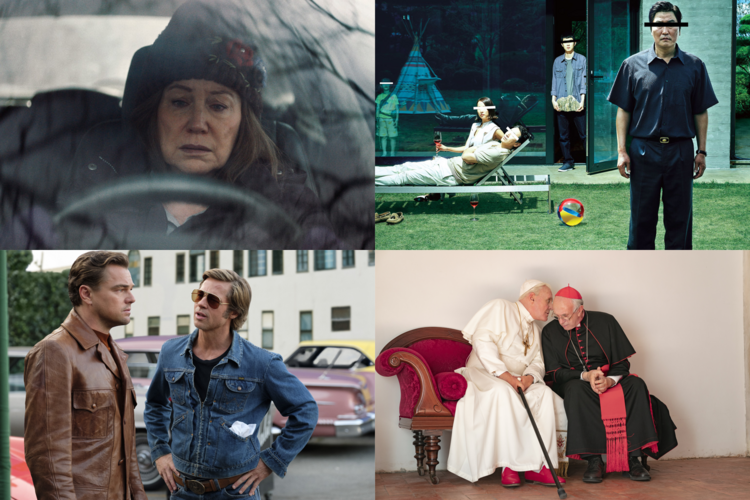 Clockwise from top left: ‘Diane, ‘Parasite,’ ‘The Two Popes’ and ‘Once Upon a Time...in Hollywood’ (IMDB, Netflix).

The public image of the film critic is that of a Scrooge-like creature, gnarled and bent, scuttling across the gum-encrusted floor of the multiplex looking for an artistic ankle to bite. This is not an entirely accurate portrait. Critics want to like movies. They want to see movies they like. They want to share them with readers: Some movies are critic-proof, of course, but nothing is more gratifying than praising a film that might otherwise have gone overlooked and seeing that film succeed.

That said, the idea that the whole movie awards/best-of-the-year celebration coincides with Christmastime is joyfully appropriate. The reviewer gets to play Father Christmas, scattering raves like so many pfeffernüsse.

There has to be a limit, of course, and this year it’s 11. Why 11? It’s a prime number. Also: Why does it always have to be a Top 10? For the past few years this list has included nine films, but it was a good year and 11 is as random as anything else. Let’s be real: When it comes to the best films of a given year, the best film is the one you liked best. There are objective critical criteria by which films can be judged, sure. But certain movies—like people, the ones we truly love—possess a certain something that speaks only to us. These were the ones what spoke to me:

“Parasite.” Korean mischief master Bong Joon-ho (“The Host,” “Snowpiercer”) produced an intricate, enigmatic, politically volatile and dramatically propulsive film, one that continues to rattle the American market and the entire awards-season landscape: It’s not only a financial phenomenon, it is also being discussed seriously as a Best Picture Oscar nominee. (Only 10 foreign-language films have ever been nominated and none have won.) All of which distracts from the film’s many charms, which include its curious and touching story about family, its critique of capitalism and class and its abundant humor.

“The Two Popes.” In a year that saw some epic acting from both predictable and unexpected places, little came close to the faceoff between Anthony Hopkins and Jonathan Pryce playing, respectively, the former and current occupants of the Chair of St. Peter. In this speculative drama, set mostly at the papal summer residence, Hopkins’ Benedict XVI is cagey, lonely and sharp as a razor; Pryce, as the Argentine archbishop who will become Pope Francis, is humble, guilt-ridden and Benedict’s intellectual equal/theological antithesis. Their dance— including an impromptu tango—is a delight.

“The Irishman.” Martin Scorsese “de-aged” actors Robert De Niro, Joe Pesci and Al Pacino for his sweeping story of mob violence, labor and the disappearance of Jimmy Hoffa. But the real miracle of this 3-hour-plus gangster epic is the way the fabled director synthesizes the themes that have always fueled his work—including crime, punishment, redemption and remorse—and turned it all into something both valedictory and new.

“Portrait of a Lady on Fire.” The act of looking is at the core of this ravishingly beautiful period piece by the French director Céline Sciamma, a film with two equally entrancing heroines: The artist Marianne (Noémie Merlant), who is hired to secretly paint a subject who has refused to sit—Héloïse (Adèle Haenel), for whom the portrait will be part of the marriage contract with a “Milanese gentleman” she has never met and doesn’t want to marry. As Marianne scrutinizes her subject, the viewer does as well, and we become absorbed in the evolving relationship between the two young women and twinned-out acts of art and love. The cinematography, by Claire Mathon, is breathtaking.

“Us.” A devilishly plotted horror film with a disturbing racial subtext, this second feature by Jordan Peele is a worthy follow-up to “Get Out,” which was one of the best films of last year. Lupita Nyong’o, an Oscar winner for “12 Years a Slave,” gives an astounding double performance, but the whole cast is first-rate.

The writer-director Kent Jones, with his first film “Diane,” positions himself as the American Bresson, with the most Catholic film of the year.

“Diane.” The writer-director Kent Jones, with his first fictional feature, positions himself as the American Bresson, with the most Catholic film of the year (except for, maybe, “The Two Popes”). Diane, played with a weary worldliness by Mary Kay Place, spends her days in diligent service to her friends and family. But only gradually do we realize that her entire life has become an act of penance for sins that only she seems unable to forgive.

“I Lost My Body.” The heroic, disembodied appendage that journeys through Jeremy Clapin’s bittersweet animated tale—a human hand—is bitten by rats, mauled by a drooling dog and scampers across enough Paris Metro station platforms to suggest a fistful of plague and pestilence. Nothing short of deliciousness is provided by the movie, however, with its sense of heroic mission and capricious destiny, a sweetly melancholic tone abetted by Dan Levy’s music and a stylistic sensibility that suggests, in its daring, “Spirited Away,” “Waking Life,” “Persepolis” and “Waltz With Bashir.”

I have been haunted by “Once Upon a Time...in Hollywood” ever since I first saw it.

“Citizen K.” Mikhail Khodorkovsky, onetime Russian oligarch and now an anti-authoritarian activist based in London, is the subject of Alex Gibney’s tautly constructed documentary, which should be required viewing for Americans, especially considering the once-over it gives Vladimir Putin.

“Once Upon a Time...in Hollywood.” I have been haunted by this film ever since I first saw it, not because of the performances of Brad Pitt and Leonardo DiCaprio or the cinematography of Bob Richardson or the malignant history of the Manson Family, but because of Quentin Tarantino’s audacious might-have-beens. For all of the film’s cartoon violence—and enormous tension and inherent lack of seriousness— there is a tender, melancholic sweetness to its conclusion that will be lingering long after 2019 is gone.

“Uncut Gems.” Furious, frantic and unstoppable, this thriller by the Safdie brothers, Josh and Benny, stars Adam Sandler as a 47th Street jewelry hustler outsmarting himself at every turn, and never losing his hunger for the next longshot, crazy deal or roll of the dice. Like all the films above, it should be seen in a theater, although a viewer might really long for a pause button during some of the more electric episodes.

“Les Miserables.” The tropes are familiar: The honest cop in the corrupt system; the street-level gangsters just trying to survive; the kid who makes an unforced error and throws the metaphorical match on a situation ready to explode. Ladj Ly, the Mali-born, first-time feature-maker, directed an ultra-contemporary drama about cops and immigrants facing off in a flammable France, a film that is pure forward motion with a social conscience.