‘Fleabag,’ or, in praise of cool priests who swear

‘Fleabag,’ or, in praise of cool priests who swear 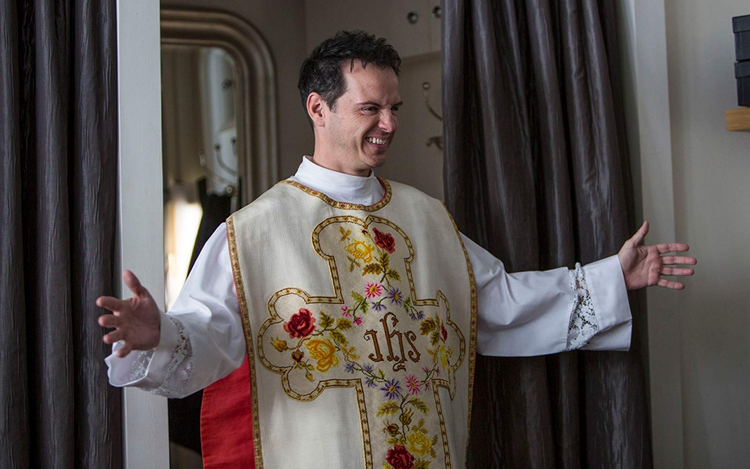 The Priest in ‘Fleabag’ (photo: IMDB)

Sometime at the beginning of this millennium, when I was about to enter the Jesuits, my comedian friend Joanna asked me, “So are you going to be one of those ‘cool priests,’ the kind who swear, wear sneakers under their cassocks and shoot hoops with the kids on the playground?” I replied that yes, I was, because what the world and the church needed were more “cool, swear-y priests.”

If the terrific second season of “Fleabag,” by the creator and star Phoebe Waller-Bridge, is any indication, I was indeed a prophet…or at least, on one occasion, prophetic, as the “cool priest” is alive and well and on your TV screen.

“Fleabag” debuted in 2016—but since the Brits don’t follow the same urgent supply-and-demand paradigm as American television, the series’ second (and final) season was released this year. (In the United States, it can be found on Amazon Prime.) Anyone who questions this model of “less is more” television should watch the entirety of “Fleabag,” which consists of a total of 12 half-hour episodes. They happen to be funnier and more thought-provoking than the 25,000 half-hour episodes of “Friends” (that stat might not be entirely accurate) put together.

The show follows its titular heroine (Fleabag was what the family of Waller-Bridge called her growing up), a 30-something café owner, as she attempts to navigate life in contemporary London while coping with the recent death of her best friend and business partner, Boo. On top of that, she has to deal with her widowed father’s pending nuptials to her mother’s former student and with her aggressively passive-aggressive godmother (Oscar winner Olivia Colman of “The Favourite”).

"Fleabag" is funnier and more thought-provoking than the 25,000 half-hour episodes of “Friends” put together.

While this is going on, she is also fighting off the advances of her overachieving older sister’s American husband, all the while managing to have a lot of sex with random men—a lot of sex. A lot. Consider yourself warned.

While the series’s first season was primarily concerned with charting Fleabag’s sexual exploits and surveying her broken relationships, both familial and otherwise, the second season takes things to a more spiritual plane…sort of. One of the primary narrative threads involves Fleabag’s infatuation with a Catholic priest—portrayed by Andrew Scott, who is perhaps best known for his devilishly droll turn as Holmes’s nemesis Moriarty on BBC’s “Sherlock.” The priest is never given a name, and even in the show’s credits he is simply listed as “the Priest.” (To be fair, the given names of Fleabag, her father and her godmother are never revealed either.)

The priest in “Fleabag” is of a type that has become, surprisingly, quite common in film and on television in the wake of the church’s sexual abuse scandal: He is a “good priest.” Scott’s priest joins Brendan Gleeson’s Father Lavelle in “Calvary” (2014) and Sean Bean’s Father Kerrigan in “Broken” (2017), to name two notable examples of positive depictions of contemporary clergymen in mainstream television and film.

The second season takes things to a more spiritual plane…sort of.

Depictions of the “good priest” differ in the details but usually share some basic characteristics. They are invariably morally upright, at least in the secular humanist sense, and they are always “damaged” in some way. (Scott’s priest is the product of an alcoholic home, and—perhaps to demonstrate that the show doesn’t have its head in the sand—his estranged brother is a pedophile.) The vocation of the “good priest” is usually a second career (Scott’s priest checks that box) and invariably has a sexual past—if not necessarily a sexual future. (“Fleabag”’s priest admits to many, many sexual partners before his ordination.) The “good priest” is invariably socially progressive and it is made either explicitly or implicitly clear that he is not beholden to the teachings of the “institutional church.”

The “good priest” is invariably socially progressive and is not beholden to the teachings of the “institutional church.”

What distinguishes Scott’s priest from most of the other contemporary priest depictions is that he is not worn down and broken by his ministerial life. He is a priest who loves what he does and garners energy and life from his work. Indeed, he is presented as a beacon of hope in our heroine’s otherwise empty and nihilistic world. While everyone else in her life comes off as morally vacuous and consumed with self-preoccupation, the Priest radiates ease, self-assurance and serenity. And Fleabag is drawn to that, drawn to him.

It is wonderfully appropriate that Fleabag, who admits that she uses sex “to deflect from the screaming void inside my empty heart,” channels her desire for spiritual fulfillment into a carnal appetite for a good-looking young priest. This sexual desire ultimately transforms into something more, something deeper.

The subversion of the asides by the Priest is deliciously clever and works to undermine the show’s smug, nihilistic tone

One of the show’s signature motifs is Fleabag’s turning to the camera and offering continual editorials to the audience. To call these moments of breaking the fourth wall “asides” in the traditional sense of the word is stretching it a bit. They are brief—sometimes no more than a wink and or a nod—and rarely last more than a sentence. The device is as old as performance itself, and yet has had mixed results in its multiple incarnations on television. This is due in no small part to television’s emphasis on realism and the aside’s fundamental “un-realness.”

Getting Catholicism, the Troubles and 90s nostalgia right in ‘Derry Girls’
Jake Martin

With that said, Fleabag’s asides to the camera work. They work primarily because of Waller-Bridge’s comedic timing and charisma. In the first season, they emphasized the playful component that underlies the series, regardless of how dark the subject matter may get. In the second season, however, the show takes these asides past the realm of the slick, self-conscious formal maneuver and turns them on their head. The Priest begins to call them out in his exchanges with our heroine.

We now see our clever heroine is not quite as bulletproof as we (and she) thought she was.

The subversion of the asides by the Priest is deliciously clever and works to undermine the show’s smug, nihilistic tone that was established in the first season—as we now see our clever heroine is not quite as bulletproof as we (and she) thought she was. But on another level, the Priest’s calling out Fleabag’s asides also highlights one of the gifts of good priests. As an outward-oriented, other-centered minister of God, the Priest is the only person in her life who is not so caught up in themselves and their own brokenness that they can be present enough to actually listen and really pay attention to her.

Strangely enough then, a show that is thought to be one of the most provocative, hip and edgy series on TV at the moment (the cashier at the Tower Records in Dublin where I purchased the DVDs of “Fleabag”—pink hair, multiple piercings right out of “Too Edgy and Punk for You, 101”—told me that the show was “made of win,” whatever that means) winds up having a priest, albeit a “cool, swear-y priest,” become the moral and spiritual heart of the show.

A good priest needs to swear, be morally upright in the secular humanist sense, and not be beholden to the teachings of the institutional church. Presumably, Augustine of Hippo, Benedict, Francis, Ignatius, JPII, etc. would be unable to play that role.

To cut to the chase, I wonder if they were sexy? And how sexy? And which ones - Augustine, presumably, and Francis...not so sure about Benedict, let alone Ignatius, and certainly not JPII, or not to my taste. Whereas the 'Fleabag' priest was, I would say to Jacob Martin, not so much cool as hot. Hot priests are very compelling and there are serious discussions -?- to be had regarding desire in both directions, as in 'Fleabag' - the 'Father Ted' priest here in the UK , RIP Dermot O'Leary, was also hot, and funny, Sean Bean was hot, hot, hot in 'Broken' - it's about looks AND vulnerability and humour and a whole lot of other things, the things that make up sexuality, yes? Which every human being has. And it is very refreshing to see it in a situation with a priest where it is acknowledged, in all its complexities. JM's photo is promising, in this regard.

St Augustine of Hippo had a past that was fairly racy. St Ignatius as a Soldier and at Court almost certainly had a sexual past. The rather ascetic-looking pictures of Ignatius do not necessarily make us warm to him. However, he must have had something to have attracted a following which is probably why the Inquisition took an interest in him. JP11 may have had a sexual past, but it is not important whether or not he or any of them had a sexual past. The obsession that some people these days have with sex is ridiculous. What does it matter!!! What is necessary is that a Priest is a compassionate person who understands the forgiveness of God. As I child I remember the priest who put you off going to confession and filled you with "Catholic Guilt".

In short, the "good priest" needs to be a Jesuit.

After reading this article, I checked out Season 1, Episode 1 of "Fleabag". For three minutes, anyway. Maybe it gets better later on. Sadly, I'll never know.

This is a great review! It inspired me to binge-watch both seasons of Fleabag. And all I have to say now is: I miss Bing Crosby.

I had just finished Season 1 before I read this, which was good because I then started Season 2. The priest is as interesting a character to enter Season 2 as the repententant/rehabilitated bank loan officer who helps out at the end of Season 1.

One other comment:
In episode 2 of Season 2, the cold open was a but distracting. It began with the Sign of Peace followed by the Our Father. That’s backwards. The priest also said, “Let us pray” to which the Assembly knelt. Normally, the response is to stand.

I had just finished Season 1 before I read this, which was good because I then started Season 2. The priest is as interesting a character to enter Season 2 as the repententant/rehabilitated bank loan officer who helps out at the end of Season 1.

One other comment:
In episode 2 of Season 2, the cold open was a but distracting. It began with the Sign of Peace followed by the Our Father. That’s backwards. The priest also said, “Let us pray” to which the Assembly knelt. Normally, the response is to stand.

This article also appeared in print, under the headline “In praise of cool priests,” in the June 24, 2019, issue.