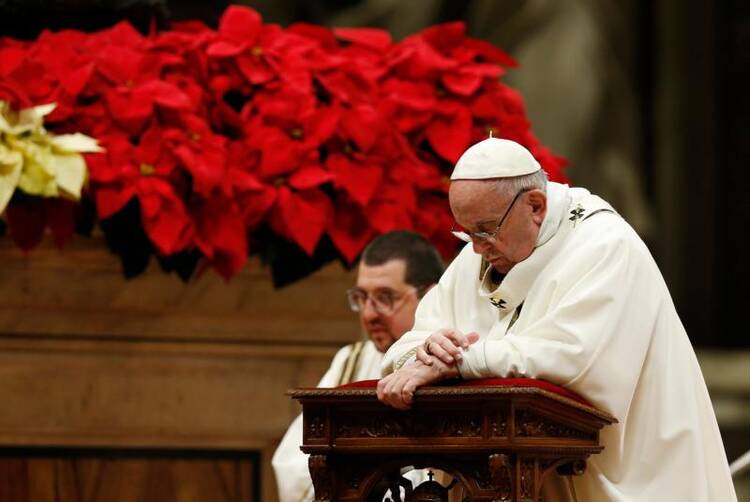 Austen Ivereigh attempts to provide such an account in his book Wounded Shepherd. The book should be judged against Ivereigh’s stated goal, which is to move beyond the “great man” account of his first Francis biography, The Great Reformer. As Ivereigh notes, it does no good to cast Francis as “an anointed, otherworldly figure [who] rises up to defeat overwhelming challenges with superhuman prowess.”

Ivereigh deploys this humbler image of Francis throughout Wounded Shepherd. A primary key to that image is to understand Francis as a spiritual director. He is not the “great reformer”; God is. Francis, rather, is the spiritual director who facilitates the church’s cooperation with the Holy Spirit.

As Ivereigh argues, Francis understands his role as a mediator of “the God of mercy.” Yet this role as mediator is not simply that of a glorified “middle man” between the church and God; rather, Francis wants to help the church in its conversion toward and for Christ. This is a priority for Francis that Ivereigh sees strengthened by his participation in the meeting of Latin American bishops in Aparecida, Brazil, in 2007, which called for a “humble, discerning disposition” to “put Christ and the poor at the center” of the church.

Popes will come and go, and the only way to understand them, much less defend or criticize them, is to see how they proclaim and anticipate the kingdom of God. Anything else is a distraction.

In other words, Francis is the vicar of Christ. Popes will come and go, and the only way to understand them, much less defend or criticize them, is to see how they proclaim and anticipate the kingdom of God. Anything else is a distraction.

Ivereigh also speaks to Francis’ mistakes, which he tends to present as delayed conversions. In Chapter 5, Ivereigh details Francis’ trip to Chile in 2018 and the controversy surrounding the clerical sex abuse crisis there. The events were unhappy, particularly Francis’ defense of Bishop Juan Barros, but ultimately led to Francis realizing that he had been the victim of a cover-up himself about the magnitude of the clerical sex abuse problem in Chile.

Through such episodes, Ivereigh characterizes Francis as someone who trusts experience over ideas but is willing to have his mind changed.

Some do not see such humility in Ivereigh’s treatment of Francis’ critics. The U.S. Conference of Catholic Bishops issued a correction of Ivereigh’s account of the U.S.C.C.B.’s fall meeting in 2018 as “false and misleading.” Others have noted that Ivereigh dismisses many of Francis’ critics as “rigorists,” a word with 11 entries in the index.

It is important to see the task Ivereigh sets for himself. He believes deeply in the goodness and necessity of this papacy and is therefore not interested in “standing in judgment” over the pope, as he told the cast of the America podcast “Jesuitical.” That is an understandable position, but it means that the book is best for those who are already sympathetic to Francis: It will not change the minds of those who are not.

This article also appeared in print, under the headline “Pope Francis the Spiritual Director,” in the January 6, 2020, issue.